Towards A Lean And Mean Ministry

Armed with an insider's perspective, S.K. Lambah drafts a charter to change the face of the MEA 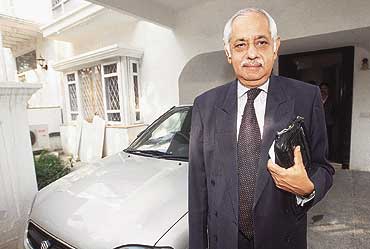 outlookindia.com
-0001-11-30T00:00:00+0553
In the draughty corridors of South Block, winds of change are aswirl, raising hope that the Indian Foreign Service (often considered foreign to both India and service) might now shed its ennui to race ahead in the international diplomacy sweepstakes. The reason for this fervent optimism is a slim, pithy 22-page report (excluding annexures) the former special envoy on Afghanistan, S.K. Lambah, had prepared—and submitted—recommending measures to pull the ministry of external affairs (MEA) by its bootstraps in the new international environment.

These sweeping and incisive steps include structural and organisational changes designed to render the MEA more effective in dealing with the world. The need for reform was felt because during the two decades following the last review, the ministry had become flabby, top heavy and experienced debilitating staff crunch at lower and middle levels. And all this at a time the nature of diplomatic activity has changed dramatically. Says a senior diplomat, "As much as 30 per cent of our officer cadres are joint secretaries. This means the pyramid gets inverted and there aren't enough officers at the headquarters to do the routine work."

But first, a little on why and how the Lambah report came about. Conscious of structural changes being effected in key institutions (including in higher defence management and intelligence) post-Pokhran and Kargil, then foreign minister Jaswant Singh thought it imperative to review the functioning of the MEA as well. Names were tossed around to head the review committee. The favourite was Arun Singh, whose advice Jaswant Singh found indispensable, no matter what hat he was wearing—of defence minister or foreign minister. But his name was shot down because he lacked the 'insider's perspective'.

Singh then turned to Lambah, who had retired as India's ambassador to Russia last July after putting in 37 years of service. Sources say Lambah started work in September and submitted the report in October. His report is the third of its kind; the first was of Sir Raghavan Pillai, a former secretary-general of the MEA in the '50s. Thirty years later, S. Sen, a former high commissioner to Pakistan, wrote the second review report. (Abid Hussain and Shankar Bajpai were the other members of the review committee).

The main recommendations of the Lambah report are:

The Lambah report has also asked for a cadre review of both IFS(A) and IFS(B), to enable the country to cope effectively with a wider and deeper engagement with the world. The last cadre review took place a decade ago, with mixed results. In the mid-'90s, it was getting difficult to find slots at the level of joint secretaries. Since the finance ministry didn't agree to create more posts in the MEA, stagnation ensued. To tide over the crisis, the MEA successfully argued for upgrading junior posts to the joint secretary level. Thus the lower echelons of the MEA are poorly staffed, skewing distribution of work and overburdening a few. Shockingly, the report finds that the number of officers per division at the headquarters has actually halved between 1978 to 2001. Equally alarming is the fact that the MEA currently has only eight posts for interpreters.

The cadre review is expected to address the problems of bottlenecks and stagnation at middle levels. The report also suggests that promotion prospects be on par with the IAS and there be a quicker system of promotions for Grade I, IFS(B), assistants and section officers. What's interesting, though, is the weeding process the report recommends. Says a senior diplomat, "If there can be a weeding process in the armed services where not all go beyond the rank of Lt Col, then why can't the same process be applied to the MEA?"

The report hopes to partially resolve the manpower crunch by reorganising missions abroad and allowing greater participation to locals in routine administrative tasks. It says a review of about 60 missions abroad could immediately render redundant more than a 100 posts. The excess staff could then be deployed to missions where more staff is needed. The report also frowns on situations prevailing in Washington and Geneva where the embassies have become top heavy and where diplomats say "it is not uncommon to replace a second secretary with a counsellor-level diplomat." Such embassies are considered lucrative postings because of substantially higher allowances and modern facilities.

This materialistic mindset explains why officers dread being posted to the policy planning and research division. The Lambah report suggests a series of measures to accord this division pride of place in the MEA. Among other things, it recommends that this division have access to the decision-making process and to information from other divisions. And to help facilitate its work, the report recommends an effective archival system and suggests that even junior officers gain experience in research and policy-oriented posts.

It also says that special attention be paid in appointing heads of missions to countries such as the P5 (permanent members of the UN Security Council), Japan, Germany, Permanent Representative to the United Nations as well as the neighbouring countries.

Pointing to the pathetic facilities and poor space allocation in the MEA, Lambah suggests that construction of Videsh Bhavan should be expedited. Simultaneously, sources say the report has argued for a transparent and speedy process of acquiring properties abroad.The report also suggests allowing the missions abroad to choose their holidays. This measure, say diplomatic sources, is presumably meant to remove situations when, according to one diplomat, "the whole world stops working but we go to the mission to remain busy".

To improve the efficiency of missions abroad, senior diplomats say Lambah has also revived the idea, contained also in the Sen Committee report, of creating the post of Inspector General of Missions Abroad to oversee aspects other than audit. India is among the few countries which don't have this system. The report also proposes a series of measures for toning financial management. One is that the MEA should, as a rule, favour the cheapest airline.

Some suggestions of the report are already in the process of implementation. It has been accepted that only officers at the level of joint secretaries should handle territorial divisions. Thus, the posts of at least three additional-secretaries (of WANA or West Asia and North Africa, Latin America and the BSM or the Bangladesh, Sri Lanka and Myanmar division) have been made redundant; joint secretaries now hold these posts. The cadre review is also under way and as a result of the recommendation there should be greater focus on the functioning of missions abroad. The suggestion that a crisp annual report (of 1,000 words) be filed by heads of missions abroad is also being implemented. Many in the MEA feel that the Lambah report is expected to spark a lively debate, especially its recommendation for evolving a merit-based promotion policy. But if this, or even half of the other suggestions are implemented, the MEA could have a veritable facelift. One diplomat puts the importance of the report in perspective, "Lambah missed becoming the foreign secretary because age wasn't on his side. But this report will leave his imprint on the MEA more than Chokila Iyer who had pipped him to the top post."