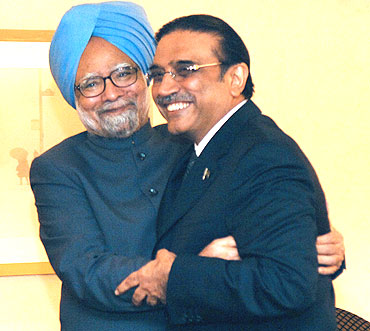 outlookindia.com
-0001-11-30T00:00:00+0553
In what is decidedly Pakistan's summer of discontent, scarred by murderous firefights, precision bombings by missiles and shattered lives in Swat Valley, people woke up to the Indian election only on May 16-the day the Congress was declared victorious and a stable government became a distinct reality in Delhi. It was a moment of pleasant distraction for Pakistanis, otherwise sunk in tracking the battle between the army and the Taliban. President Asif Ali Zardari rang up Prime Minister Manmohan Singh from Paris, congratulating him for his party's stupendous performance.

The momentary distraction segued into engagement as Singh and his ministers took oath of office, prompting TV channels and newspapers to raise the questions repeated every five years: what next in Indo-Pak relations? This question had greater resonance this time round because of Manmohan's choice of foreign minister—S.M. Krishna—is an unknown, and therefore a mysterious entity to all who feature on Pakistan's power list.

Some, though, see in the appointment of Krishna a ray of hope. Defence analyst Gen (retd) Talat Masood told Outlook, "Krishna is a fresh face from South India and will be much less prejudiced as he carries little or no historical baggage (of the Partition). He's highly educated and understands people. Foreign policy is about the welfare of the people and he will hopefully bring this change to the bureaucrats of South Block." Since south Indians weren't scorched by the Partition as severely as their counterparts in the north, it is hoped Krishna would not bring to his job the often subconscious suspicion—perhaps fear—about Pakistan's intent.

Yet some feel Krishna, as also Manmohan, could find themselves constrained because of the presence of conservatives like Pranab Mukherjee in the cabinet. Even though he is handling the finance portfolio, Mukherjee could bring his experience of the foreign ministry to nudge Krishna on the path of caution. Also, the dominant role the BJP is likely to play as the principal opposition party could deter Manmohan and Krishna from taking creative steps towards settling outstanding issues with Pakistan.

Indeed, Manmohan took some bold steps to improve relations, but preferred to remain silent about it. As Khurshid Mehmood Kasuri, who was the foreign minister during the Musharraf regime, told Outlook, "I was the only one publicly saying that there has been progress on Kashmir. I was going public because I wanted to carry public opinion along with me. I had to say that even to the Indian media as the leadership in Delhi, because of its own constraints, was silent. My intention was that, as an elected politician, you have to carry the public along with you on the Kashmir issue."

Kasuri, who is writing a book on Indo-Pak relations, says Singh should not waste time and opportunity as he now heads a relatively stable government. Crucially, the BJP has been tamed. "There was a lot of progress then, and I'm very glad Manmohan Singh is saying the same thing now. It's very necessary to say these things so that we can carry forward with confidence. We lost an opportunity in 2006. Now that elections are behind Manmohan, and he has a five-year mandate, the opposition there will not interfere. I urge the prime minister to move quickly," the former foreign minister says.

Even sources in the foreign ministry say much homework had been done on Kashmir and other oustanding issues, and non-papers exchanged. Though governments can always withdraw non-papers and resile from their position, some friendly capitals (read Washington and London) are aware of the work the bureaucrats of the two neighbouring countries had put in. It wasn't just fear of the opposition that saw Manmohan tread cautiously. An equally important factor was the Mumbai attack and Delhi's obstinate stance that the Indo-Pak dialogue couldn't be resumed unless the perpetrators of 26/11 were punished and the terror infrastructure dismantled.

At least one of India's conditions is being met, courtesy the US. As Masood says, "Pakistan, in its war against terror, is dismantling the infrastructure of the terrorists. Pakistan's intentions are there for all to see. India should hence step forward to acknowledge this and start the composite dialogue."

As for punishing the guilty of 26/11, the foreign office claims this isn't possible unless New Delhi furnishes complete and credible evidence. Additional secretary Abdul Basit says, "Of course, we'd like that India would for once and all give us all the evidence we require instead of doing it piecemeal. This would help us to initiate prosecution and we are very serious about it." This view is endorsed by Kasuri. "Let us stop playing games.... India and Pakistan have the same legal system and the same common law and law of evidence. India shouldn't fear sharing information with Pakistan if it wants convictions to take place."

This apart, Basit, as also others, feel Indo-Pak dialogue should be both "result-oriented" and, more importantly, "irreversible". Defence analyst Shireen Mazari agrees: "Neither Pakistan nor India has any other choice. India would be foolish not to respond to the excessively conciliatory attitude of the Zardari government. My fear is that India may make difficult demands on Pakistan and Zardari would accept it."

Even intelligence agencies are wary that under Washington's pressure Zardari might yield to India's unreasonable demands. One official says: "This was apparent in the first draft of an mou on Pak-Afghan Transit Trade. Zardari, together with the Americans, was ready to facilitate India's trade with Afghanistan. What's in it for us? India has to be cognizant of the outstanding issues with Pakistan before we go out of our way to facilitate its trade." This official accuses India of betraying the peace process—suspending the Indo-Pak dialogue post-26/11 even though it had declared the peace process irreversible in April 2005. Nor has Pakistan shied away from taking action, admitting to the involvement of its citizens in the Mumbai tragedy and incarcerating Lashkar activists.

The last word must go to Kasuri. He says even as India doesn't release the pause button, the back-channel diplomacy, which has reportedly made substantial progress, ought to be used even now to put Indo-Pak relations on an even keel. Really, a strong Manmohan doesn't have anything to fear about.