Strapped in our own time machine, we leap millions of years into the future... 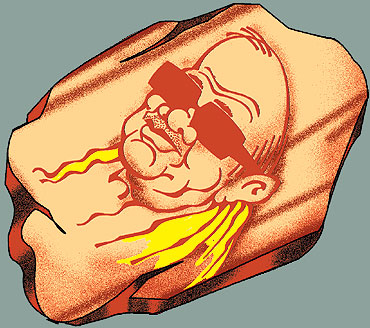 outlookindia.com
-0001-11-30T00:00:00+0553
The recent discovery of a 47-million-year-old fossil in Germany, an important missing link in the evolution of mankind, gave a huge impetus to archaeology and palaeontology in India. Strapped in our own time machine, we leap millions of years into the future, to an India where an important fossil has been unearthed from the region formerly known as Tamil Nadu. Two leading palaeontologists of the era discuss its details:

Pal 1: Just look how remarkably well-preserved this fossil is. Studies show this is from the early 21st century and we can make out several characteristics.

Pal 2: Signs of great stress, still apparent, show the fossil had a large family, several wives and children to whom it was strongly attached. This strain, which must have been crippling at the time, is evidence enough it fought hard to cadge high positions for the said members though some were not up to it. Truly, such a family-oriented fossil, and it appears to have got along with its various wives!

Pal 1: Look, the brain is intact. Reveals a lot of political cunning; remarkable staying power too. Clear indications that the fossil was someone with a literary bent, film scripts being his metier. A master in what was known as the Tamil language.

Pal 2: Look at the clear indentations over the eyes. The fossil must have worn dark glasses.

Pal 1: Interesting. And look at the feverish entanglement of ganglions and grey matter and what not! Sure reveals an undying (and undecaying, shall we add?) passion for ‘Tamil causes’. There are indications it lived to a ripe old age, but spent his last years on a wheelchair, swaddled in fame.

Pal 2: The contents of the ravaged stomach show this fossil often went on fasts, though not life-threatening, lasting but a few hours.

Pal 2: Perhaps it was okay all those years back. See now, the most interesting part—the heart. The fossil reacted in a distractingly strong way, though negatively, to the letter ‘J’, associated in this case with a female. Can you make anything out of it?

Pal 1: I can’t. But the fossil’s hands, its very fingers, bear testimony to a grand munificence. Clearly, it had doled out all manner of goodies to the people.

Pal 2: Right, this case begs for extensive research. I only hope the fossil succeeded in its life’s ambition, namely propping up its kith and kin in positions of power. Let’s go then, we have other fossils to attend to. (Exeunt palaeontologists.)

'People Showed The Opposition Its Place'