The mid-day meal has churned out a strange recipe: teachers as cooks 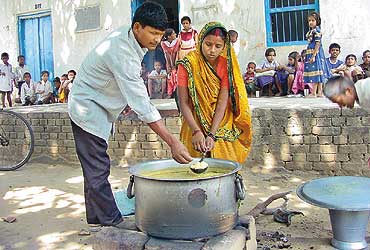 outlookindia.com
-0001-11-30T00:00:00+05:53
Clouds of smoke and the scent of boiling rice billow out from behind a broken-down brick wall. On a makeshift chulha, a man slowly stirs a big pot of khichdi with a ladle. He tastes it and asks a nearby boy to add some salt. By 9 am, the meal is ready. Another roadside eatery or a community kitchen? No, it's a school and the man cooking is no khansama (cook). He's a teacher.

The bell rings at the Jamnipur government primary school and ill-clad children rush out and squat in the open verandah. The teacher, aided by a couple of senior students, brings the khichdi bucket out and serves the mid-day meal to the children. D.S. Gungwar, director, primary education, Bihar, claims the mid-day meal scheme has been on in all government-run primary schools since January: "The rice is supplied by the Centre with a quota of 100 grams per child per day. For pulses and other ingredients, Rs 1.64 is sanctioned per child per day."

Each school is run and looked after by a shiksha samiti (education committee) that consists of local people and students' guardians, which lifts the ration as well as money via cheques from the block office. The schools do keep a record of delivery and utilisation, but as is the wont, it's not as transparent as made out to be. The school register usually shows a large number of students in the rolls but attendance is often abysmally low. But they lift the full quota and funds. At a school in Dost Nagar and Shiva Tola, attendance is nowhere near the claimed enrolment of 175 students. "It's the marriage season, most of the children do not come," explains teacher Gita Devi.

But pilferage apart, the mid-day meal scheme has other unusual consequences. Are teachers spending most of their time teaching or cooking? Says Pushpender Kumar, state advisor to the SC-appointed court commissioners who are to survey and submit a report on the scheme: "This is severely hampering teaching work."

A guardian in Maner, Baswan Sharma, says: "Almost three hours go by with no classes since the teachers are busy in the kitchen. The children just help them or loiter." At one such school in Naya Gram that Outlook visited, children were playing in a mango orchard. Some of them were helping the lone teacher cook. Classes are held from 6.30 am to 11.30 am. But the teacher—mostly a Shiksha Mitr, a para-teacher temporarily employed by the samiti—has to start cooking by 7 for the food to be served by 9. By 10, the children have finished eating and want to go home.

Although many schools are now employing cooks, the children are also involved in this "extra-curricular activity". Anyway, in most cases, the cook is either related to the teacher or the samiti office-bearers. The samiti secretary in Lodipur, Rajballabh Paswan, confesses that his wife prepares the meal.

Another important objective of the scheme, social equality, has also turned out to be a sham. The rules say all children have to be treated as equals, and that teachers should eat with the children. But in caste-ridden Bihar, the reality is rather different. In Patheri village in Gaya, two women hired to cook were assaulted by a group of villagers on the first day itself. Upper-caste villagers were infuriated to learn that the cooks were Dalits. Refusing to let their children eat anything cooked by a Dalit, they dumped the cooked food. That was the beginning and the end of the scheme in the school; the headmaster has complained to higher-ups, with little success.

In Harihar primary school at Barharwa village, Motihari, headmaster Dipa Ram has adopted some unique teaching methods. During the mid-day meal recess, he teaches the alphabet by asking students to memorise A for Ansari, B for Baitha, C for Chamar, D for Dusadh and so on, identifying all the alphabets with low castes.He also got letters inscribed on students' dishes—a student of the Chamar (cobbler) caste gets a plate inscribed with C, a Yadav boy with a Y. It seems even the best laid and most well-intentioned plans find their match in the state of Bihar.