Too Convenient By Far 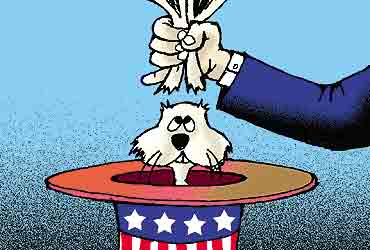 illustration by Sandeep Adhwaryu
Prem Shankar Jha May 05, 2003 00:00 IST Too Convenient By Far

outlookindia.com
-0001-11-30T00:00:00+0553
IF they turn out to be true, the disclosures made by an Iraqi scientist to a US team searching Iraq for weapons of mass destruction will prove a godsend to the morally beleaguered governments of George W. Bush and Tony Blair. For, they will provide precisely the vindication for launching the war that both have been searching for ever since they invaded Iraq. The scientist claims that Iraq was manufacturing both chemical and biological weapons; had destroyed stocks and research facilities only days before the start of the war; had focused on research and development projects that were virtually impervious to detection even by the UN weapons inspectors; had buried large amounts of chemical precursors for storage and future use; had been transferring some chemical and biological weapons, technology and chemical precursors to Syria since the mid-'90s, and had links with Al Qaeda. This was truly a hole-in-one strike for the US!

But are these disclosures true? Can the scientist be trusted? Does he even exist? Doubts arise because of the sheer convenience of the scientist's disclosures. For the US and UK, the need to find some evidence that Iraq had indeed been producing WMDs and lying to the UN had grown more urgent with every day of the war in which these weapons were neither used by the Iraqi army, nor unearthed by the advancing 'coalition' troops. Scepticism reached its peak when, two days after the fall of Baghdad, Iraq's top scientific advisor to Saddam Hussein, Gen Amer-al Saadi, gave himself up to the American forces but insisted, even then, that Iraq had no WMDs left, and that it had been telling the truth in its declarations to the Security Council all along. What lent him credibility was the fact that he had everything to gain and nothing to lose from turning into a witness for the prosecution after Iraq had been conquered.

Typical of the mood that it was generating was a scathing editorial in the British newspaper, The Independent, on April 20 titled 'Where are they, Mr Blair', in which the lead edit pointed out that a month of war and occupation had produced 'Not one illegal warhead. Not one drum of chemicals. Not one incriminating document. Not one shred of evidence that Iraq has weapons of mass destruction'. It then went on to contrast this huge blank with the impassioned assurances that Blair, Jack Straw, Bush and Colin Powell had given repeatedly to the entire world on the basis of intelligence reports that turned out to be of dubious value. A rising chorus of similar doubts across the world had made it clear that what was at stake was no longer the disarming of Iraq but the legitimacy of America's claim to lead the world.

Was it then a mere coincidence that the US military trotted out the Iraqi scientist the very next day? Coincidence cannot be wholly ruled out. But there are too many anomalies surrounding his sudden appearance, and too many gaps in what he had to tell (at least as released by the US authorities) to rule out the possibility that this may be another exercise in misinformation, perhaps the most elaborate embarked upon by the US so far. First, the information about the scientist's defection was not given to all of the media, but only to select media like The New York Times. Second, the Times was not given any access to the scientist. Its correspondent, Judith Miller, was allowed to see someone who the authorities claimed was the scientist in question, from a distance at an alleged chemicals burial site. What she reported was an account of what the scientist has allegedly told the army authorities. Third, the story itself was not given immediately. Miller got it three days after she got to know of the scientist's existence. He may have been with the US forces for even longer.No one has accounted for the delay.

Fourth, Miller had to submit her story to the army authorities for vetting before she was allowed to send it to her paper. According to her, they asked her to remove the names of some of the chemicals that the scientist had led the US team to, because if these were published it might help identify him and endanger his life. This excuse stretches credibility very thin because, given his crucial role in establishing America's credibility, it is inconceivable that the US authorities would have left him unguarded in his own home (as Miller says they have done), and not spirited him and his family away to a secure location. Could it be that the US does not want to release the names of the chemical precursors because these could just as easily be used in the manufacture of commercial products like pesticides?

Fifth, a significant omission in the story handed to Miller is the location of the warehouse research laboratory that was blown up. Now that the war is over and Saddam is gone, hiding the location serves no conceivable purpose. But revealing it could just open the US to rebuttal by the members of UNMOVIC as happened with some of Powell's February 5 disclosures to the Security Council.

The credibility of the story is not helped by the fact that some such startling disclosure has been widely expected from the moment the US decided to replace UNMOVIC with what The Guardian contemptuously dubbed usmovic; and that the US has shown no willingness to allow UNMOVIC to go back into Iraq, and has not even shared the scientist's disclosures with the organisation.

All in all, much, much more verifiable proof is needed to get Bush and Blair off the hook.

How Big Is Georgetown?