To Touch The Peaks 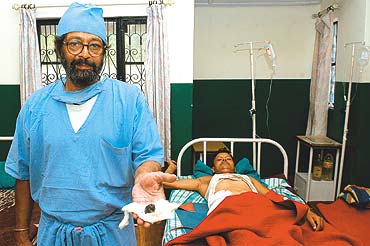 Thirteen years later, he moved again, urged by publisher Ravi Dayal, whose family's trust wanted to improve medical facilities in Kumaon. Until Trehan arrived at Maj Khali, near Ranikhet, the nearest urologist—in a region where kidney and gall-stones are endemic—was in Bareilly, 200 km away, or Lucknow and Delhi, both nearly 400 km away. "In Delhi, a hundred urologists compete for patients, here there's just me," he says.

After a failed attempt to work with a government hospital, Trehan zeroed in on a private hospital, using the trust's money to upgrade facilities. In a ward full of his patients, he checks on driver Man Singh, recovering after the surgical removal of an outsize stone from his kidney. Stoically, the man recalls his agonising journey: homeopathy, government hospitals that couldn't deliver, a private hospital 90 km away that quoted Rs 18,000. Now he will pay Rs 8,000, not cheap for him, but not extortionate. Only for the poorest patients does the trust step in.