It was in the series against India last summer that Vaughan transformed himself from just another promising batsman to being the bedrock of the English side. 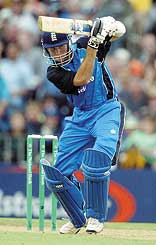 For an Englishman to be named the Man of the Series where Australia has just whiplashed England is quite an honour. And, that is precisely the kind of an honour which sets Michael Vaughan apart from the rest of the heap in the England team. And when your skipper, a hard taskmaster like Nasser Hussain, says he would "pay to watch him bat", it does mean that the player does have all it takes. Though a Lancastrian by birth, Vaughan has followed successfully in the footsteps of great Yorkshire opening batsmen like Sutcliffe, Hutton and Boycott.

Vaughan’s batting in 2002 has been the talk of international cricket through the year and has marked him out as a future captain. After all, he did lead the England A side successfully in 1998-99 to South Africa and Zimbabwe. He himself averaged over 40 and handled the side most maturely. It was those qualities that finally saw him make the main England squad to South Africa in 1999-2000.

In his debut series in South Africa, he did not play as an opener in the four Tests. His scores were modest, but what was noticeable even at that stage was his temperament which is still his greatest strength. It was no surprise when he was handed a full England contract for 2000.

But then came a series of injuries. A smooth flow in his career eluded him. He started the 2001 season well with a fine ton in the quarterfinals of the Benson and Hedges Cup against Somerset. That was his first century in a limited-overs match.

Close on the heels of that he registered his first Test hundred against Pakistan at Old Trafford in Manchester. That smooth-flowing century came in a match which England disappointingly lost. In the previous Test at Lord’s which England won by an innings, Vaughan made a modest contribution of 32. But the NatWest Series involving England, Pakistan and Australia was a big setback. He scored just seven...