To Sow The Whirlwind

India's search for the openers continues, this time for a lethal quickie to take first bite of the cherry with Zaheer Khan. Trouble is, there's no tearaway on the horizon. 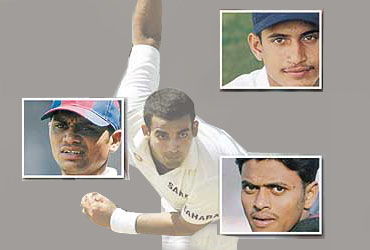 outlookindia.com
-0001-11-30T00:00:00+0553
There is no man in the immediate future of pace bowling in India who is faster than the Rajdhani Express, especially when it's crossing an old bridge. The brightest hopes from the domestic circle touch well below 140 km during their speediest moments. The tracks they bowl on are no better than the Railways'. Their deliveries keep lower than a Daschund sometimes. And there is not a single Indian who has infused enough fear of god in any batsman during his playing days to train these boys well. Dennis Lillee may have almost got a ration card in Chennai after all his frequent visits to the mrf Pace Foundation, but somehow even he has not been able to take a tall, lanky young thing and convert him into a speed demon.

So when the selectors recently brought back Javagal Srinath from Test exile, they were not showing love for senior citizens. As former quickie and mrf Pace Foundation's coach T.A. Sekhar says: "Right now, our best two prospects are half as good as Srinath." But he does add that the boys will improve once they are blooded in the big league. As age catches up with Srinath—and in all countries it has the habit of catching up just before the World Cup—there is a case for finding that one bowler who will share the cherry with Zaheer Khan, in purely cricketing terms.

There are currently at least five names that are doing the rounds, but two of them are more equal—Irfan Khan Pathan, a devout Muslim who plays for Baroda, and Tamil Nadu's Lakshmipathy Balaji, who is reassuringly non-vegetarian unlike what Srinath was during his early days. Shalabh Srivastava from UP, Baroda's Rakesh Patel and Gujarat's Siddharth Trivedi are the others in the horizon.

At 18, Irfan appears to have the best shot at the India cap in the near future. But there is one problem—he too is a left-armer, like Zaheer. Two left arm fast bowlers opening the innings, for some reason, appear like a dancing pair with some defect while nobody would have complained if they were right-handed. It may seem like another conspiracy against southpaws by a world that believes 'right' is 'correct' and The Left is senile. But, however unfair it may sound, Irfan has to contend with this strange 'defect' which India suddenly has in abundance though there was a time everybody prayed for a cricketer who could at least come in with the drinks in his left hand. The 6'5" bowler will count on his good form alone in recent times to get the India cap.

In 12 first class matches he has played, Irfan has taken 39 wickets at an average of 26.74. In 2001-2002 alone, he took 26 wickets, conceding 20.38 runs for each wicket. Even on cruel pitches, Irfan has actually reminded batsmen that he is quick. Though the Under-19 Indian team lost the World Cup semi-final against South Africa in New Zealand early this year, coach Dilip Vengsarkar was impressed enough to tell some people that Irfan is lethal.

Dennis Lillee himself, who is stingy with accolades, said in his typical understatement after taking a good look at him in Chennai: "He seems to have the potential to blossom into a talented fast bowler." Eventually, Irfan was chosen to play in the India A team that toured Sri Lanka under captain Hrishikesh Kanitkar but since weather gods normally don't have cricketing brains, it rained throughout. An important entry point into the international side was blocked. But as a member of the Under-19 team that went to England where "sporting wickets" are always mysteriously different from India's "sporting wickets", Irfan impressed not just with the ball but also to some extent with the long handle, once scoring a vital 42 runs in a 72-run partnership. A fast bowler who can bat better than Glenn McGrath is every coach's dream. And Irfan might just have that long heave that Srinath does, though the latter heaves even when he misses the ball.

When the International Cricket Council created sponsorship-related problems before the Champions Trophy in Sri Lanka, the BCCI included Irfan in the spare team they had in mind just in case the regulars uldn't make it. But cricket executives, uncharacteristically, sorted out the problems in time. Or, Irfan would have made his international debut before he got his voting rights. Former Indian fast bowler Rashid Patel, who has been an important influence on Irfan, says: "He has a good outswinger but needs to work on the inswinger which is a lethal weapon in any fast bowler's armoury. Zaheer's presence has worked wonders for aspiring pace bowlers in Baroda, including Irfan." Not surprisingly, for a boy who has learnt the difficult art of swinging the old ball, his hero is Wasim Akram.

Claiming equal status with Irfan is the 6'2", 21-year-old right-arm fast medium bowler from Tamil Nadu, Lakshmipathy Balaji, a commerce student in Chennai's Vivekananda College where traditionally neatly-combed Brahmin boys are a bit serious about education. Balaji, of course, is what is called a 'visiting student'. He giggles for a long time when asked to comment on Indian pitches. "You have to keep hitting the deck," he says. He has seen the pitches in Australia after going there on the Allan Border-Sunil Gavaskar scholarship. He later corrected his bowling action and also a certain flawed foot landing, in the National Cricket Academy and the mrf Pace Foundation. He claims he has not calculated his speed yet but says he knows he is not "too fast". "There may be tearing fast bowlers in the country," he says in a way that's not clear if he is being cruelly funny or just matter-of-fact, "But nobody has found them yet." Balaji has 50 wickets from 15 first class matches and a reputation of being a mean, accurate bowler. "He has a good yorker," says Sekhar.

Says Tamil Nadu coach K. Bharathkumar in a direct comparison between Irfan and Balaji: "I will be biased towards Balaji but nobody can disagree that he is an excellent fast bowler." Balaji has a deceptive run-in, the coach says, and a good slow ball. At least in the slow ball department, Balaji has to be considered better than Srinath, for the Bangalorean's 'variation' is so slow that on occasion the ball has to be sent by courier to the batsman. In Ranji Trophy matches, Balaji doesn't take much time in eliminating the tail, which Bharathkumar calls, "9, 10, Jack". And when it is time for the tail to appear, the coach says the captain just calls Balaji to finish it all. "He can also belt the ball if you give him a bat."

Siddharth Trivedi held out a lot of promise, though he took just nine wickets in seven Under-19 World Cup matches. He too has been consumed by injuries of late. His father, who picks up the phone in Ahmedabad, says poignantly that the press should put in some good words for his son who is in Mumbai playing a low-key match, staying at nights in a modest hotel called Araam. "I have cancelled the roaming on his cell phone," the father says. Cost-cutting.

It is in this insecure world of domestic cricket that we hope a boy will tear every muscle, risk every injury, just to bowl a bit faster than the Rajdhani Express.