To Catch A Falling Star

In post-Taliban Afghanistan, Islamabad is marginalised, with its foreign policy in in tatters. 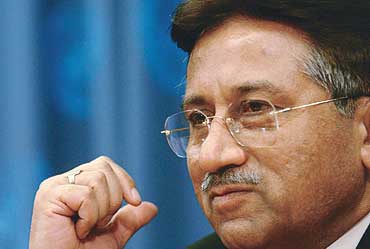 outlookindia.com
-0001-11-30T00:00:00+0553
You have to give it to Pakistan President Pervez Musharraf. Even in these gloomy days, he looks cool and assured, his mood remains upbeat and his stride hasn't lost its familiar spring. But this insouciant visage of his conceals a man extremely worried—and angry—at the way the war against terrorism in Afghanistan has quickly undermined Islamabad's interests. There's obviously a lesson in all this: never put all your eggs in one basket.

But the general, and the Pakistani establishment, had done precisely this, and he's ruing the decision. Just look at the way the Taliban collapse has also brought about a collapse of Pakistan's Afghan policy. Three months ago, Kabul was Islamabad's backyard; it called all the shots there. In just a fortnight of Kabul's fall, Pakistan is the only one of Afghanistan's six neighbours which doesn't have a presence there. Forget Russia and Iran, even India has a team there. No wonder the general is worried and anxious, as people close to him confirm.

Gen Musharraf is also angry at Washington, at how President Bush led him up the garden path, publicly declaring that the Northern Alliance (NA) wouldn't be allowed into Kabul. Yet the Americans carpet-bombed the frontlines in Afghanistan to pave the way for the relentless march of the NA. Kabul is gone, most of Afghanistan is gone and Islamabad's foreign policy is in tatters. There are many here who are holding their breath, too gracious to say "We told you so" at a time when national security has been imperilled.

For the moment, though, Pakistan has initiated a damage-control exercise to ensure that the Bonn process for determining the transitional arrangement for Afghanistan doesn't burn Islamabad further. What are the guidelines here? Says director-general of the Institute of Strategic Studies, Dr Shireen Mazarim: "For Pakistan today, it is of utmost importance that there is peace and stability inside Afghanistan, that Pashtoons are represented in any political set-up in Kabul, that Afghan refugees return to their country as soon as possible. Also, there should be rapid economic development so that future refugee movements are halted, and an Afghan government that does not provide refuge to Pakistani terrorists and that does not allow India to use its territory to open a second front against Pakistan."

These are all formidable goals to achieve, especially considering the way Musharraf's constantly-changing Afghan agenda post-9/11 has come to naught. There was a demand to keep Kabul demilitarised and have the UN run it. The NA simply walked into the city. Talks of including the 'moderate Taliban' in a future government always seemed a non-starter; any hope left was dashed following the slaughter of Taliban troops, including Pakistani volunteers, at Qala-e-Jangi in Mazar-e-Sharif last week.

Outmanoeuvred in Afghanistan, and also realising that it was impossible to bring about a rapprochement between the NA and the Taliban of any hues Musharraf changed his tune again—he began to talk of including 'moderate Pashtoons' in the government. Nobody could argue against this formulation: any viable government in Kabul, obviously, has to have representation from the dominant Pashtoon community. Yet, as observers here point out, the list of Pashtoon delegates who are in Bonn shows that only two of then can speak the Pashto language; some in fact have never even lived in their homeland.

Aware of this glaring anomaly, foreign minister Abdul Sattar, at a joint press conference with British foreign secretary Jack Straw, tried to make amends, claiming that the UN could upgrade the Bonn list to render the ethnic representation equitable. But then, is anyone really asking Pakistan for its views? There are other depressing turns the war in Afghanistan has taken for Musharraf. For one, Pakistan is haunted by the spectre of angry Pashtoons in the NWFP avenging the massacre of their kinsmen in Afghanistan. Some are talking of identifying and killing non-Pashtoons in Afghan refugee camps here. In other words, the war could well spill across the border.

More important is the fact that the US Marines are near Kandahar, adjacent to Pakistan's Baluchistan province. The News underlined its possible impact on Islamabad's security concerns: "Their prolonged presence, even if it is meant to provide logistic support for whatever stabilising force is put into place, will be a source of concern for the neighbouring states. They could become handy targets for ambitious Afghan political groups to rouse popular emotions. Foreign occupation armies always incite anger, hostility and extremism among locals. More so the Americans, who carry an exceptionally heavy baggage of global animosity. For Pakistan, any sort of disturbance across the border in a country still to stabilise will be pregnant with danger."

Portents of what could happen came on Wednesday, when British troops crossed the border to search Killi Siddiq village in Chaghai district. Their mission: to hunt for Al Qaeda men who had purportedly taken shelter there. All this could snowball into major problems for Pakistan.

Equally worrying for Islamabad are stories in the American media that two Pakistani nuclear scientists, now under house arrest, had been visiting Afghanistan and helping Al Qaeda develop anthrax and biological weapons. Many here feel this could become a pretext for the US, which now has a formidable presence in the region, to neutralise Pakistan's nuclear assets.

The hawks, though, feel the situation in Afghanistan remains fluid and that Pakistan should wait and watch instead of rushing in to formulate its Afghan policy. Argues former ISI chief Hamid Gul, who's under fire for building the Taliban: "I believe that the Taliban (or its variant) will regain power in Afghanistan in due time. In the present situation, Pakistan doesn't have any card to play; it has gone along with the US even though it hasn't been given its due status as a partner in the US-led coalition."

But even Gul thinks Pakistan faces a grim future. He points out: "The intelligence agency of communist Afghanistan, Khad, will now reorganise and start playing havoc in the streets and bazaars of Pakistan. Besides deploying troops on our western borders, we will have to raise additional formations. This will imbalance our defence budget." Needless to say, it will also accentuate the strain on the struggling Pakistani economy.

Former interior minister and Pakistan People's Party (PPP) leader Aitizaz Ahsan says Islamabad is paying the price for its rigid mindset, for putting all eggs in one basket. "Is it not a tragedy that while the Pakistan army, wearing the blue UN beret, would have been the most appropriate peacekeeping force in Afghanistan, it is being expressly excluded for our perceived partisanship?" he asks.

Ahsan favours flexibility and acceptance of the new reality in Afghanistan. "If we don't," he argues, "we will also be denied a role in the rehabilitation of Afghanistan despite our good standing in the coalition, our proximity, our manpower, expertise and vibrant industry. We are the most appropriate nation to reap the benefits of any programme for rebuilding Afghanistan.It appears that the foreign office mindset will deny these fruits to our armed forces, our entrepreneurs and our people."

The best way out for Pakistan, says former PPP senator Shafat Mahmood, is to stop playing games inside Afghanistan. He argues: "We have played too many games in Afghanistan. The expression 'great game' was coined by the English in the context of superpower rivalry of the 19th century to control Afghanistan. Some of our latter-day warriors took this to mean that they could impose their favourites on Kabul. This game or great game or stupid game has to end. We must recognise that we don't have the capability to impose solutions on Afghanistan. We must be ready to deal with whoever controls that country."

It is the NA that controls the country and its leader Burhanuddin Rabbani has sent conciliatory signals to Islamabad, expressing his readiness to meet Pakistani leaders. This is the offer Islamabad could take and test whether the NA is prepared to bury the past and do business with it.