T.M. Krishna: Music In The ­Plural | By Ananya Vajpeyi

T.M. Krishna uses music to show democracy is the sound of many voices rising up to the sky 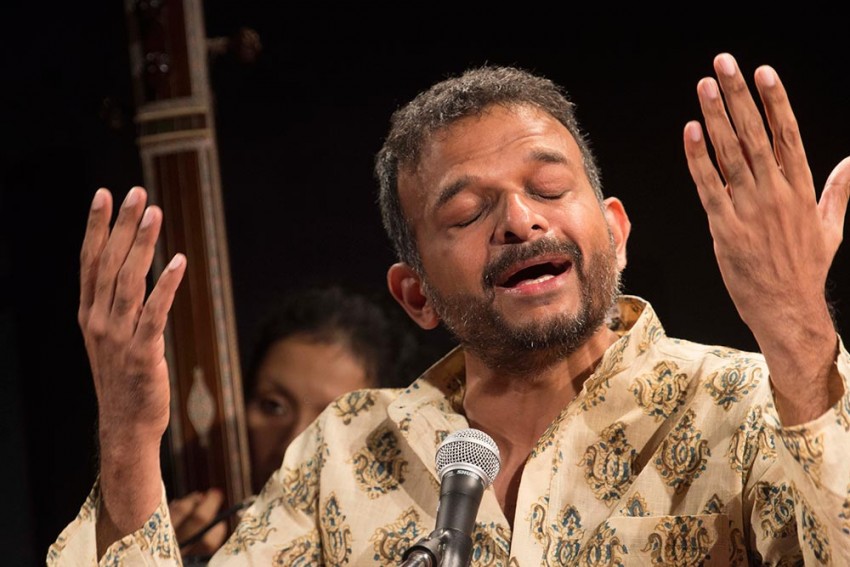 Different Tuning
T.M. Krishna is no champion of the Indian ­nation and its state-building
Photograph by Hariharan Sankaran
Ananya Vajpeyi August 08, 2018 00:00 IST T.M. Krishna: Music In The ­Plural | By Ananya Vajpeyi 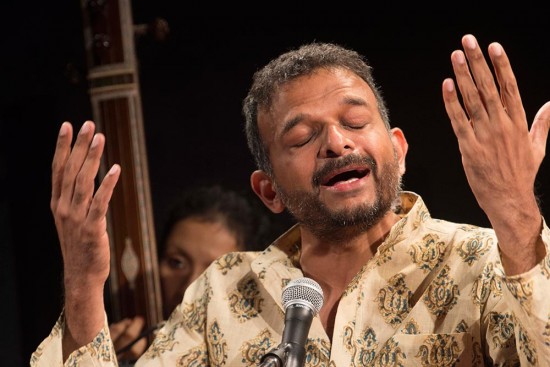 In this column, Ananya Vajpeyi talks about Carnatic music vocalist TM Krishna.  "Like his celestial namesake with his divine flute, Krishna sounds a mesmerising music, one that calls us to join in the great dance, the raslila, of Indian democracy," she says.

Of late, aficionados of Carnatic music have surely become accustomed to the vocal presence of one of this classical form’s most talented practitioners, Thodur Mada­busi Krishna, 41, for his fans, simply ‘TMK’. He is continually in the news, not just for how beautifully he sings, but also for his articulate and often controversial engagement with important issues in our political life as a nation. A virtuosic performer and public intellectual, with unimpeachable musical credentials, unafraid to speak his mind on matters far exceeding the purview of the classical arts, Krishna has created a unique niche for himself in 21st-century India’s cultural scene.

In the past five years, Krishna has published A Southern Music (2013), a prize-winning tome that both masterfully explicates and completely deconstructs the history and features of what he calls “Karnatik” music. More recently, a slender tract titled Reshaping Art (2018) plunges into the ethics, politics, psychology and aesthetics of artistic practice, grounded in the form he knows best, but venturing well beyond art music.

Krishna has initiated a wholly unprece­dented annual music festival called the Urur Olcott Kuppam Vizha, now entering its fifth year, located in twin fishing villages on the beaches of South Chennai. He has released music videos on subjects as varied as mercury poisoning because of a Unilever factory in Kodaikanal, fly-ash dumping and the encroachment of marine commons by hydrothermal power plants in Ennore, and ongoing legal battles surrounding the constitutional rights to privacy (the Aadhaar universal ID case) and sexual choice (Section 377). His partnerships with Tamil poet and fiction-writer Perumal Murugan, environmentalist Nityanand Jayaraman and rapper Sofia Ashraf lend an altogether new political charge to what has hitherto been an elitist, esoteric and conservative art form, one primarily devotional at its core.

Every citizen or group has both the ­freedom to speak as well as the ­prerogative to ­remain silent. The right to ­participate in the music of our ­political life ­belongs to all.

Like the late great M.S. Subbulakshmi before him, Krishna sings in multiple Indian languages (Hindi, Bengali, Gujarati, Marathi, Kannada, Malayalam and English, besides Telugu, Sanskrit and Tamil in which Carnatic music is traditionally rendered). Astonishingly polyglot, at least in music, he is able to sing the works of medieval bhakti poets Tukaram, Tulsidas and Narsi Mehta, modern poets Rabindranath Tagore and Subramania Bharati, as well as the canonical repertoire of the established Carnatic trinity, Thyagaraja, Diksitar and Syamasastri. Unlike MS, though, he has not so far sung film songs whether in Bollywood or the southern movie industries (though he has gone on record with his assessment and appreciation of film composer-singers Ilaiyaraaja and AR. Rahman, both fellow-Tamils, in their own domain as popular and successful as Krishna).

And more importantly, unlike MS (about whom, incidentally, Krishna has written at great length on several occasions), it is not that Krishna sings widely beyond Carnatic’s narrow domain because he is invited to give voice to the Indian nationalist project of “unity in diversity” that prevailed in the Nehruvian era. For Krishna is no champion of the Indian nation, its state-building, or indeed any kind of officially-sponsored ideology in service of political power. Nor does he sing whatever it is he might be paid to sing by numerous public and private patrons, sponsors and donors.

Rather, he consciously and carefully curates a complex multilingual web of lyrics, plucked from diverse regional literary traditions and historical periods, so as to make an argument, through music, that is essentially an argument for democracy. As he sings songs taken from Tamil Sufis and Deccani Jogappas, Gandhi’s ashram and Tagore’s Rabindrasangeet, Krishna is melodiously inviting us to do what democracy demands: at once make our own voice heard, and listen to the voices of others.

Krishna’s purpose is not to “democratise” classical music. His ambition is, in fact, much greater—to demonstrate through music that democracy itself is a mixture of many voices, a collage of myriad identities, forms, practices, communities and canons. Sometimes this merger is noisy, at other times, harmonious. Sometimes it is a fleeting phrase, and at other times, a deafening din. The point is to recognise and respect that each and every citizen or group has both the freedom to speak as well as the prerogative to remain silent. The right to participate in the music of our political life is one that belongs equally to all.

Just as our arts, our musical styles and our languages are plural and diverse, so too are our political beliefs and ideological preferences. The flip side of hierarchies of taste is the censorship of that with which we disagree. We don’t want to hear what others want to say, and thus sometimes we forcibly try to silence those who sing a different song, or hum an unfamiliar tune. Just as we dismiss the music, dance, theatre or whatever cultural expression of others as not valuable, worthy or beautiful, we also try to curb and crush the diversity of political opinion. Krishna means to say that intolerance is fundamentally undemocratic. 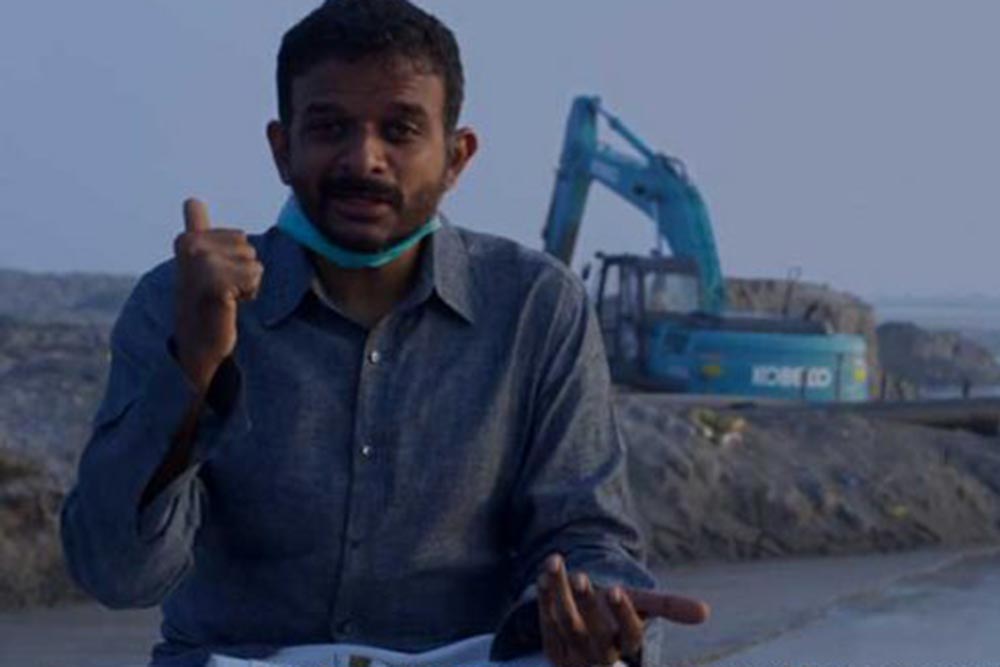 Krishna’s harmonising of musical virtuosity, passionate advocacy through song and speech, and outspoken political dissent call to mind singer-songwriters like Bob Dylan, Bruce Springsteen and Bono—important voices in global democratic movements and social justice campaigns, making the most of their status and reach as mega-stars loved by millions of fans worldwide. Closer home, Krishna’s ability to combine artistic inspiration and civic pedagogy, together with the ground he has cleared for critical reflection on pressing social and political problems, recall significant figures in 20th-century India, like polymath Tagore, philosopher J. Krishnamurti, musician Ravi Shankar and dancer Chandralekha.

It hasn’t happened yet, but perhaps Krishna will eventually build an institution where the work of singing, writing, activism, teaching and experimentation with both musical genres and forms of collective action can be centred. As he enters the next phase of his public career, he could think about ways to draw students, comrades, admirers, volunteers and fellow travellers to one location for more concentrated and sustained explorations of diverse possibilities in art, politics and life. The time has certainly come to lay the foundations for such an alternative and visionary institutional space.

Here the seeds of the Vizha could be planted to grow into a complex multi-dimensional project like the Visva Bharati University at Santiniketan, which took decades of careful tending to finally yield two or three generations of artists, scholars and thought-leaders for the postcolonial nation. The lack of an analogous laboratory for creativity and dissent is sorely felt in our dismal present. Today mainstream politics increasingly fails to deliver any discourse of questioning, opposition or alternatives. Meanwhile, public universities and art schools, nurseries of change, painstakingly nurtured for over a century since the anti-colonial era, are being systematically dismantled and destroyed by the right-wing regime within a matter of mere months.

T.M. Krishna’s self-appointed task is to remind us of the ­civilisational ­resources we ought to draw on to build an India serious about achieving its still ­elusive freedom.

What can one individual, no matter how gifted, original, energetic and inspiring, do in the face of the frightening authoritarianism, the nakedly majoritarian agenda, the pervasive violence and the ecological crisis that are together engulfing India and the planet by the day? Not much, as Krishna would be the first to acknowledge. No matter how many ecstatic concerts he gives, how many impassioned articles he writes, how many brilliant lectures he delivers and how many edgy music-videos he makes, TMK’s power ultimately lies in his ability to point to a possible future, one of hope and betterment rather than of certain destruction.

The Magsaysay Award citation lauds him for arguing that art could be socially transformative, for advocating inclusiveness in the sphere of cultural practice, and for being an emergent leader in his field. But Krishna is not trying to be a social reformer in the 19th-century mode—an upper-caste, privileged, educated enlightener of the benighted masses. Real transformation cannot come from Krishna alone, as someone who is basically a practitioner—even if a very fine one—of classical music. It has to grow out of a broader context of reception and amplification wherein his art is not just appreciated and consumed, but recognised for what it can actually do, which is to force us to think with some urgency about the real dimensions of our human existence, our social order and indeed now our planetary survival as such.

In Reshaping Art, he names Basavanna, Kabir, Kanakadasa and B.R. Ambedkar as examples in our past of those who raised the ultimate question: “Who am I?” This is a telling list, comprising outcastes and poets, visionaries and dissenters. These figures all achieved a kind of emancipation and left behind a legacy of enlightenment, even as they came from the darkest corners of caste society and struggled against terrible forces of religious, social and political marginality, bigotry and oppression.

Krishna’s role does not lie in being or becoming like one of these figures­—his social class and Brahmin background make such an identification impossible, no matter how radical his message.

Rather, his self-appointed task is to remind us of the civilisational resources we ought to draw on to practise a progressive politics and build an India that is serious about achieving, preserving and increasing its still elusive freedom. Like his celestial namesake with his divine flute, Krishna sounds a mesmerising music, one that calls us to join in the great dance, the raslila, of Indian democracy.

Ananya Vajpeyi is a Fellow at the Centre for the Study of Developing Societies, New Delhi