Maratha organisations repeatedly stressing they called for a “peaceful protest” amidst all the reports of violence is an astute line to take; it paints the morcha leadership in a ‘civic’ colour, while the tide of the mass of Marathas protesting can be left to take its own course—of exhibiting to the administration its nuisance value. 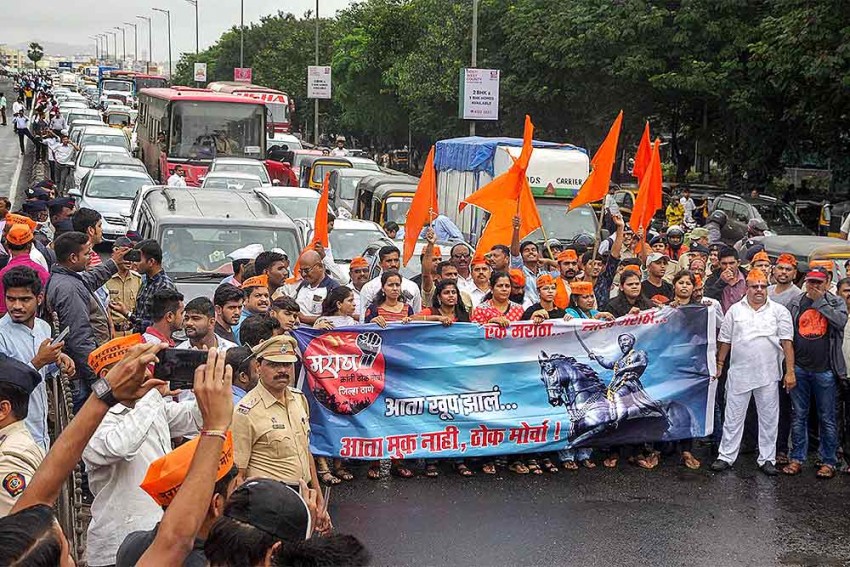 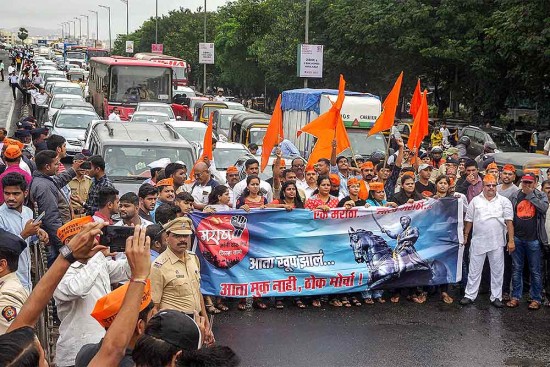 It’s temporary relief, everybody knows it. Even as the Mumbai bandh, spearheaded by the Maratha Kranti Morcha (MKM), was called off by its leaders around aft­ernoon on July 25, the protest mac­hinery took its own time to shut down completely, the last grunts and squ­eaks coming till late evening from the city’s neighbouring areas. It’s a mix of spontaneity and organisation that has given the Maratha demand for reservation in jobs and education its pot­ency since the past couple of years.

The morchas have managed to tie up tributaries of the community’s general disaffections—farmers’ woes, violence on women, education, etc.—to be able to produce this high tide of protesters of varying hues capable of bringing Mumbai, along with other state cities, to a halt. Maratha organisations repeatedly stressing they called for a “peaceful protest” amidst all the reports of violence is an astute line to take; it paints the morcha leadership in a ‘civic’ colour, while the tide of the mass of Marathas protesting can be left to take its own course—of exhibiting to the administration its nuisance value.

Read Also: Why Are Marathas Protesting: All You Need To Know

Maharashtra CM Devendra Fadnavis had little space since the start of the protests. He used up one of the go-to opt­ions a day before the bandh, by calling an “emergency high-level meeting”. The other move came on the bandh day. This protest was called off by late afternoon after he announced to the media that the government is ready to initiate talks with MKM and come to a solution.

The recent wave of protests shows that the issue cannot be postponed further without a ­substantial outcome arising.

Some believe the BJP is deliberately creating such situations in the state. “The BJP government wants to polarise the Maratha reservation issue to create a rift among other communities in the state,” Nationalist Congress Party spokesperson Nawab Malik tells Outlook. “The government has intentionally not submitted the affidavit in court. And despite approving the dem­ands in the Lok Sabha, they have never shown such positive approach, as was seen on Wednesday,” he adds.

This ‘positive approach’ shown by the CM signals that the issue cannot be postponed further without a substantial outcome arising. But the way the Maratha agitations had been brewing in the state, coupled with the promises of successive governments along the way, this was only to be expected. It was only the NCP-Congress government that had first approved the Maratha reservation demand, informed Sanjay Dina Patil, the NCP’s former Lok Sabha MP. “However, the High Court had then stayed the reservation of Marathas for which the case is still in the court,” adds Patil.

After the Congress lost in the state, it was the BJP’s turn to take up the ‘challenge’, that also makes ample electoral sense. “The Marathas make up 32 per cent of the state’s population.” says a Shiv Sena leader. Even though demographic reports show different figures, 32 per cent is a huge electoral chunk for any party. “But, the BJP is facing a lot of problems in the state with various groups,” adds the Shiv Sena leader.

It was in the late 1990s that the Marathas demanded reservation for the first time as a reactionary stand to the implementation of the Mandal commission report. The financial progress of other communities that got quota had meant that the Marathas started facing financial problems, explains a veteran party worker from MKM.

This sentiment grew as the years passed on, latching along other issues that plagued the community, until a share in the reservation pie became a ­final demand of sorts—one answer to all woes. The recent bandh is only an adv­anced stage in this series of negotiations the Marathas have been involved in with the government. With the 2019 elections not too far away, it will be crucial for the BJP to sort out the issue so as to not earn the ire of the dominant state community. But there seems to be no middle path in this new-wave of ­quota demands that have been rocking many states in the past couple of years.