Time For A Change, Bud, Get It?

Sure, things are a little different now, but a total revamp is needed if the annual account is to become more than a yearly rerun of an old drama script 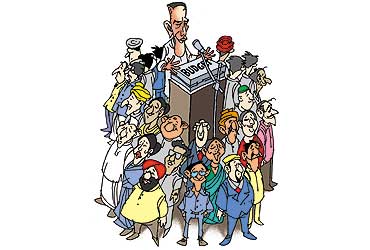 Ten days from now, the nation will be presented with its 56th budget. This will also be Yashwant Sinha's fifth consecutive budget, a record for a non-Congress minister and deservedly so. Despite this unique distinction, the budget event has failed to raise much heat and dust this year. Even my traditional wife, who has been a "keen budget observer" (read, price-level watcher), is subdued. When I asked her, she puckered her face: "What's the big deal about yet another budget? Some tax hikes, duty cuts, price rise, some lines of poetry." Taken aback, I went to my best buddy. "Say, what's the dope about the budget? I heard they're going to take off all tax concessions?" I ventured. "S.... the budget," my friend said, and launched into a speech on how the budget brouhaha had become entirely irrelevant to the way India was being financially (mis)managed. He also reminded me how, days after the second nda government took over, the prime minister told a cii conference rather proudly: "The budget is always a bit of a mystique!"

Is there, honestly, a reason to be so? Isn't it time the Indian Parliament and people behaved with maturity towards the budget? Let's face it: budgets have rarely made or broken the economy except in two years in the last decade—the ground-breaking Manmohan Singh budget in 1991 and the 1998 Chidambaram budget which slashed income-tax and reduced other duties (but collapsed too soon). And the most important decisions of 1991—trade policy, exchange rate reforms, devaluation—and many others were announced outside and before the budget.