Timber! Timber! No... Not Again 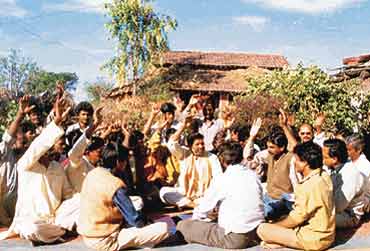 outlookindia.com
-0001-11-30T00:00:00+0553
Ever since they could remember, the villagers of Majni in Gotegaon block of Narsinghpur district, Madhya Pradesh, lived off the adjoining jungles. Flouting laws and felling trees was the primary occupation of the villagers. Drinking and gambling occupied their spare time. Majni was known as a village of dreaded criminals with even the police and forest officials wary of bringing them to the book.

But all that changed with Dabbal Singh, who took over as the sarpanch about ten years ago. For the first eight years, he let things run as they did. But deep within, he wanted to bring some respectability to Majni. Heading a village of criminals was a stigma. "I was tired of being constantly reminded that I was the headman of a village of ill repute. I wanted respite. I envied the quiet and happy lives of the people of neighbouring villages," says Dabbal.

Nearly a year ago, when Dabbal met G.S. Tekam, district coordinator of DPIP’s (District Poverty Initiatives Project) self-help poverty alleviation programme, he knew there was hope for change. Tekam assured all help to Majni on one condition—the sarpanch would have to persuade the village to mend its ways and take up farming. "It was a very difficult task," recalls Dabbal. But he had made up his mind and there was no looking back. Dabbal began interacting with the villagers who responded favourably. The initiative, backed by financial inputs from DPIP, finally transformed the village. Gone are the illegal forays into the forests. Crops are growing in the acres of land which lay fallow for years. A green cover has enveloped Majni. Land under cultivation has increased almost tenfold—from barely 20 acres to around 200 acres. Most of the land is well irrigated. A sprinkler system, two tractors and a thresher are all manifestations of the fact that the villagers have taken to farming with zeal and sincerity.

A five-thousand litre capacity tank and pipelines will soon provide clean water to every house and six bio-gas units will ensure smoke-less cooking. "Anyone from the nearby villages will be surprised by the transformation," says Pramod Singh, a villager.

The transformation did not happen overnight. Self-help groups were formed and DPIP chipped in with its contribution. Land was levelled, tubewells sunk and power supply arranged to run the pumps. The district planning committee sanctioned Rs 1 lakh for power supply infrastructure. This was supplemented by Rs 35,000 contributed by the villagers themselves.

Soon as many as 30 self-help groups were formed. The groups were sanctioned a total aid of Rs 20.5 lakh. An additional Rs 5.75 lakh was sanctioned for infrastructure development. Each group harvested around 60 to 70 quintals of wheat and gram. Arhar and urad dal were sown in the kharif season and wheat and gram in the rabi season from last year onwards. The sale of the produce not only brought in cash but also the satisfaction of a mission accomplished. The villagers have now begun experimenting. Members of one of the self-help groups are growing sunflower. Others have moved on to high-breed varieties of arhar. Still others are growing vegetables.

All children of school-going age in Majni now regularly attend their classes. The village has a primary school. For higher classes, children go to schools in the neigbouring village. "It is akin to moksha for us, and this is all due to Dabbal Singh who has shown us the right path," says a villager, Dwarka. They are now aspiring for more. They want a road to connect Majni to the main road. This and other improvements may or may not happen. But what has been achieved is remarkable. The hands that once wielded the axe now work the sickle.