Velupillai Prabhakaran's 'coming out' was no surrender, it was a politically-loaded performance 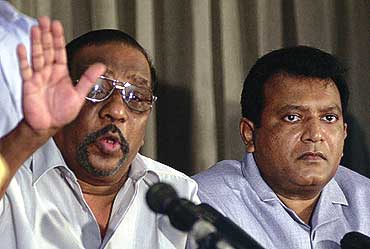 outlookindia.com
-0001-11-30T00:00:00+0553
Billed as Sri Lanka’s mega media event, it was to symbolise the end of a bloody chapter in the country’s troubled history. However, just about everybody knew what was to be said—or not. And yet they couldn’t help getting excited. Perhaps because it was South Asia’s way of telling the world that the region wasn’t only about bombs and terrorists and that it also had the sagacity to nurture peace. For the first time in 12 years, the dreaded Liberation Tigers of Tamil Eelam (LTTE) supremo Velupillai Prabhakaran was to make a public appearance. More importantly, he was to talk peace. And this provided a glimmer of hope to a battered and weary nation.

But when Prabhakaran walked into the hall packed with journalists, your bewilderment at all the fuss could easily be forgiven. He just wasn’t his image. Dressed in that outdated safari suit, with his hair dyed black and face clean-shaven, he seemed harmless, every inch the mainstream politician.

There we were, 200-strong, of different nationalities, gawking at him and his bodyguards, who from behind their sunglasses scanned us nervously. He took the microphone. Flanking him was the irrepressible LTTE spokesman and ideologue, Anton Balasingham, who was to translate the questions in Tamil and, then again, render his boss’s answers in English. In the first hour Prabhakaran was ill at ease, perhaps woefully out of habit in having to give replies. Balasingham stepped in to control unruly journalists, even occasionally fielding queries meant for his supremo. It helped Prabhakaran relax, to gamely subject himself to tough grilling in the next 90 minutes.

But Killinochchi hadn’t been as simple for us. The evening had been spent watching rebel propaganda videotapes, in conditions oppressively humid. The dinner, though, was a definite improvement—rice, and vegetable, egg and chicken curries cooked exquisitely. The accommodation was poor: most had to spread out on the floor, without a fan to beat the heat. But it ultimately didn’t matter because they had planned not to allow us enough sleep. At 5 am sharp on Wednesday, April 10, we were woken up to experience the paranoia of one of the most formidable terrorist groups in the world.

Herded and transported to an undisclosed destination, we were then subjected to gruelling searches, the LTTE cadre going to extraordinary lengths to ensure there were no nasty surprises in store for them. We were even asked to take off our socks to allow them to feel between our toes. The equipment needed to cover the conference was deposited, these were then dismantled and weighed. The rebels forced the state television to jettison their plan of broadcasting the conference live, insisting that their mobile station be located 7 km away.

Those who had thought of soaking in the mood were sorely disappointed. You could only talk to LTTE cadres. Reticent, though friendly, they seemed to have their answers rehearsed and ready. O, yes, they wanted peace. O, yes, it was time to forget the past. Their pithy replies showed they had been chosen carefully and briefed diligently.

Rules were laid out firmly—no one could leave the conference midway, no one could exit till Prabhakaran had departed. And when the LTTE bigwigs sauntered in, Balasingham said apologetically: "We expected only about 75 journalists to come. We didn’t expect such a large gathering."

At 5.30 pm, 12 hours after we had been woken up, the press conference began. Prabhakaran was quick to home in: "The right conditions have not arisen for the LTTE to abandon the call for a separate state. It is the demand of the Tamil people and not the demand of the LTTE as such. In the 1977 general elections our people gave a mandate to fight for a separate Tamil state. It is on that mandate that we are fighting for political independence and statehood."

But he was equally adept at balancing this statement. "We are sincere in our commitment to peace. It’s because we are serious about the peace process that we had declared a unilateral cessation of hostilities and continued it for four months. That clearly demonstrated our genuine intentions for peace." You could hear a few sighs of relief.

But doesn’t the current peace process, like many other similar initiatives in the past, run the risk of going off track? The LTTE supremo identified two reasons why he was more optimistic this time than ever before. First, there was the Norwegian involvement. And then Prime Minister Ranil Wickremesinghe’s commitment to the process was genuine. Prabhakaran said the talks in Thailand between the Sri Lankan government and the LTTE was only to discuss the establishment of an interim administration, and that even this could happen only after the ban on the organisation had been lifted.

And then Balasingham came with a gem, claiming that the LTTE didn’t recognise the authority of the Sri Lankan state, that while Wickremesinghe was the prime minister of the country, Prabhakaran was "the prime minister and president of Tamil Eelam". The LTTE chief then added, "The right condition has not arisen for the LTTE to abandon the policy of independent statehood." He said that if the final solution of self-rule and autonomy embodies the LTTE demand for a Tamil homeland, only then would it respond positively.

There was also a veiled threat of returning to the bush were the peace process to fail, never mind the global coalition against terror. "We are not a terrorist group. We are freedom fighters. They must come up with a clear definition of terrorism which they have not done so far. Groups are named as terrorists only for their own selfish interests," declared Prabhakaran.

Obviously, the LTTE must have sounded the government or the Norwegians about its response to questions that could have been easily anticipated. The PM was quick to welcome the press meet: "He has opened a window of opportunity. He has clearly stated for the first time that he was looking for a solution within a united Sri Lanka."

The government is expected to announce certain measures to keep the process on rails. For one, the LTTE might be de-proscribed this month. There’s also the 90-day deadline the two sides have to meet for implementing confidence-building measures. Only then can the Thailand talks begin. There could be delays. For instance, the opening of the main Jaffna-Colombo road through rebel-held Wanni almost didn’t happen when the LTTE demanded exclusive rights over transport in the area under their control. The government rejected the demand that passengers disembark at the LTTE border and travel the distance to the other side in LTTE-operated buses. The LTTE lodged the first-ever complaint of ceasefire violation with the Scandinavian monitoring mission. But the monitors ruled that this issue was not part of the deal, insisting that the road be opened on schedule. The Sri Lankan government for its part has now lodged a complaint that the LTTE is blocking passengers buses from running between Colombo and Jaffna.

But these are not insuperable problems, and the warring parties had expected these glitches to surface. However, if the talks in Thailand do happen, only then peace could be considered half won.