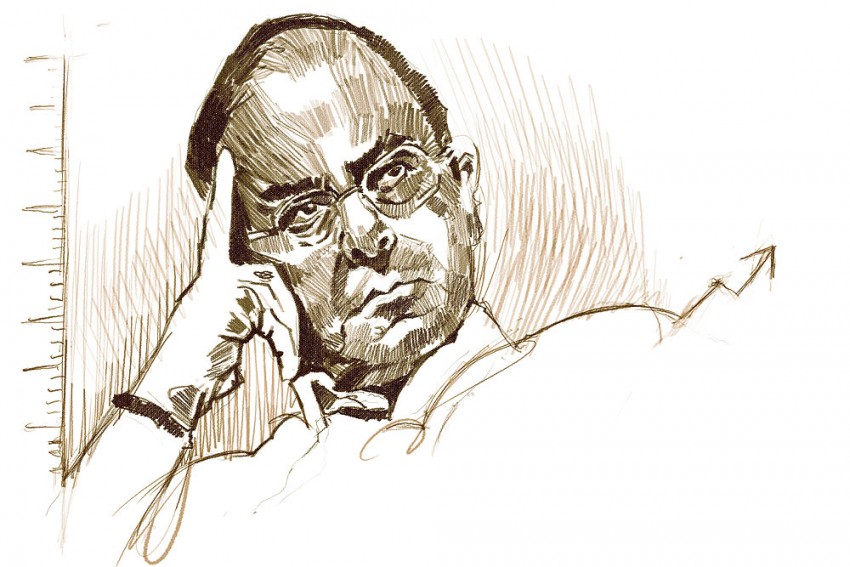 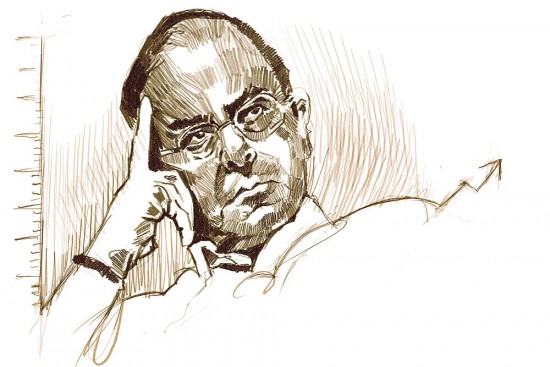 Arun Jaitley’s life has been full of dramatic loops, sudden upswings and a few downturns, till finally he’s arrived at a job that has him at the helm of the nation’s economic affairs. And at a time when there’s been a tectonic shift in Indian politics. His budget is as political as the man and in a sense it can be argued that he is a status quoist, fundamentally against anything too radical, leftward or rightward. His budget presentation, which lasted a little over two hours, wasn’t one of his best turns in Parliament, where in the past even opposing parties have admitted that as LoP of the Rajya Sabha (2009-14), Jaitley raised the level of debate in the Upper House.

Soon after the budget speech was over, a tired Jaitley walked in to his chamber in Parliament to claps and cheers and indicated to his wife Dolly that there was a catch in his back. He then sat down to lunch, during the course of which he was also briefing the bjp’s ministers holding other economic portfolios as also party spokespersons. The ‘structured interviews’ to DD and other news channels would happen later in the evening but he shared his initial post-Budget thoughts with this correspondent. He saw the fillip to manufacturing and tax relief for the middle class as the big takeaways from the budget. “The idea was to give tax relief across the board and one asset to every state, such as an AIIMS to West Bengal,” he said. He made it a point to say that NREGA has not been dismantled and the scholarship schemes for minorities remain. “In addition, I have created clusters for minority craftspersons who are skilled in zari, handloom, weaving, handicrafts.” Jaitley also revealed that a scheme for J&K came after a recent conversation with chief minister Omar Abdullah, specifically the one for creating stadiums in both Jammu and the Valley. The funds allocated for Pandits to resettle in the Valley, he said, would be handled by the Union home ministry in coordination with the state government.

The man in the hot seat is temperamentally talkative, sociable and a great host, known for setting a fine table—and then proceeding to describe each food item in considerable detail. Ever since he landed at the top of the pecking order in the Narendra Modi regime, he has joked with friends that the new job has at long last had him metamorphose into someone who talks less and listens more. 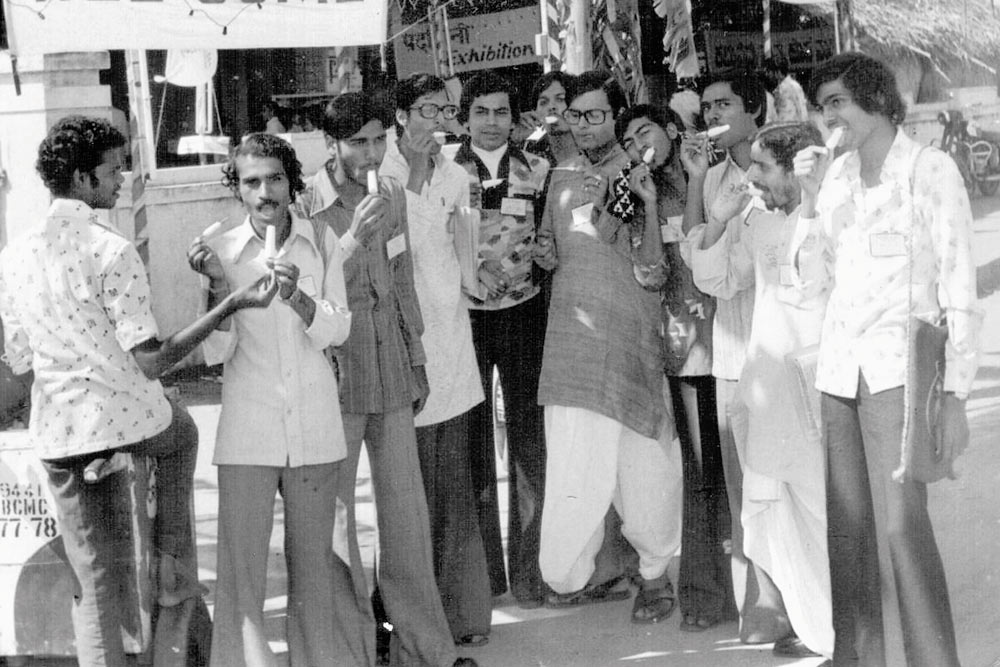 But then smart one-liners and jokes have always been part of the Jaitley repertoire. Within the current leadership of the BJP, Jaitley is possibly the most sophisticated at striking warm equations with people he respects/likes, even if they are not followers of the BJP ideology. His friendships range from old college buddies, to those who were in jail with him (he was in Tihar for 19 months during the Emergency), law­­yers and doctors, and even a newspaper proprietor. This is somewhat unusual for a  politician, but ironically the bonhomie often visible around Jaitley has at times been missing when it comes to some relations within his own party, particularly with the late Pramod Mahajan and current external affairs minister Sushma Swaraj. Both were seen as rivals from the same generation of leadership in the BJP.

It has been reported that his equation with Modi goes back to the post-2002 riots period when then PM A.B. Vajpayee was bent on taking on the Gujarat CM at a party meeting in Goa (Jaitley manoeuvred things to Modi’s advantage). But actually there’s an older connection. Because of the infighting in the Gujarat state BJP, Modi was actually banished from state politics for six years (1995-2001) as one faction saw him as a trouble-making pracharak (he is believed to have held this against Sanjay Joshi who would later feel the brunt of Modi’s wrath). During that time, Modi lived in the party headquarters in Delhi (he was always much sharper than the typical old-world pracharak) where he struck up an equation with Jaitley. In 2001, Jaitley was one of the people who lobbied with L.K. Advani to send Modi as CM to Gujarat—a significant decision at that time as he was the first RSS full-timer to be directly brought into active politics. Ever since, Modi and Jaitley have worked together comfortably, the former evolving into a charismatic public speaker who is also described as being a great listener, the latter loquacious in closed circles but not so great at mass contact. 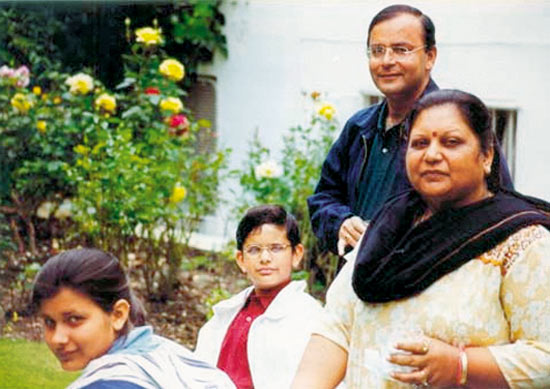 Ever since landing the new job as FM, he’s joked to friends that it has made him metamorphose into someone who talks less, listens more.

Yet, Jaitley’s greatest skill would be his understanding of systems such as bureaucracy, judiciary and media. There’s also a wide network of contacts and a circle of close friends, including the well-connected Delhi solicitor Raian Kar­an­jawala, who was his junior at the Shri Ram College for Commerce (SRCC). As Kara­njawala recalls, “A lot of Arun’s friendships go back to his days in the college debating society.” Jaitley and Raian were in the SRCC team that went to debate in St Stephen’s where they were up against Shashi Thar­oor and journalist Swapan Dasgupta (who would years later become another good friend). In the Hindi debating circuit was Rajat Sharma, another member of the Jaitley entourage who now heads India TV. As Karanjawala recalls, the big incentive to winning debates in those days was the fact that prizes were given in cash. Other contemporaries from those days in Delhi University are retired IFS officer Hardeep Puri, now in the BJP, Pawan Varma, ex-IFS officer and author who’s now in the JD(U), and Rohinton Nariman (also from SRCC) who has just become a judge in the Supreme Court.

Another circle of friendships would evolve after Jaitley began practising law. He lived in Naraina in West Delhi, and built up a practice from the trial courts level. Fellow lawyer Rajeev Nayyar (son of journalist Kuldeep Nayyar) became friends with Jaitley then. He reveals a nugget: Jaitley never learnt how to drive a car. For years, Jaitley, Nayyar and Karanjawala would meet every week at a restaurant in Connaught Place. Then Nayyar would drive them to the AIIMS crossing from where Jaitley would take an auto back to his West Delhi home. Says Nayyar, “Our political ideology never came in the way of a personal friendship. The main thing is that he looks out for friends. That’s why so many people from the legal profession—and a lot them were non-BJP—turned up in Amritsar for his campaign.” Nayyar himself made four trips as a show of solidarity, while his very anti-BJP father made one.

Indeed, that’s a much repeated refrain about Jaitley: as a lawyer, he’s helped out many friends without charging them. Within the circle of people he feels close to, he will call to ask about health matters, show up at weddings, book releases and so on. This attitude extends to his personal staff who are fiercely loyal. They include Padam Singh (with him for 13 years), Surender and Bhatia, the latter who served during the last NDA regime, and has now reappeared in the finance ministry. Journalists who have done the rounds have for years also seen Gurdeep Singh, who takes notes in shorthand. He’s the man who actually types out the blog, usually dictated by Jaitley in a span of 15 minutes. 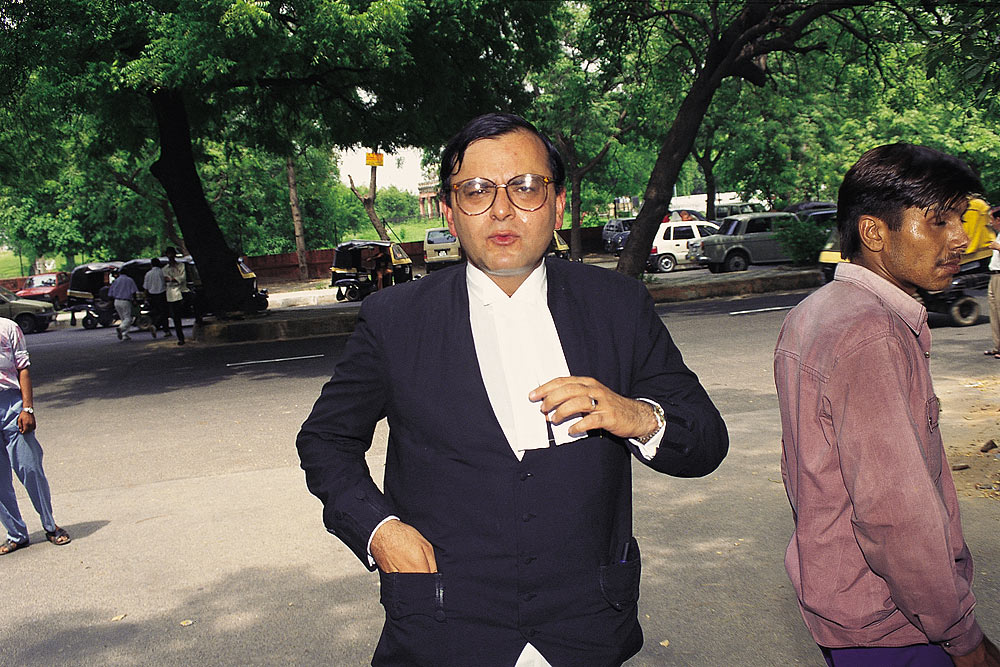 Curiously, it wasn’t a BJP politician but former PM V.P. Singh who played a role in Jaitley first coming to national prominence. That story involves the Indian Express group, whose founder Ramnath Goenka was served with a demolition notice on their Delhi building in the 1980s by then L-G of Delhi, Jag­m­ohan. Jaitley was one of the lawyers roped in to fight against it, because as Karanjawala says, “he was making a mark for out-of-the-box, innovative solutions.” Because he made a mark in the Express case, in 1989, V.P. Singh would make him the additional solicitor-general, although at 37 he was considered young for the post. After that, there was no looking back as far as success as a counsel was concerned. Among his friendships from the profession is one with former telecom minister Kapil Sibal. Karanjawala remembers regularly getting together with Jaitley and Sibal in those days. During the UPA second term, P. Chidambaram, another high- profile politician-lawyer and the last finance minister, also attended Jaitley’s annual lunch party, usually held on a weekend in December on a date around his birthday on the 28th. Now many of Jaitley’s longstanding friends have been appointed to prominent legal posts. They include Mukul Roha­tgi, the new attorney-general,  Ranjit Kumar, who lives two houses down from Jaitley in Kailash Colony and is now solicitor-general, and the very likeable Maninder Singh, Jaitley’s junior when he practised law, and now an additional solicitor-general.

Clearly, there are friends but Jaitley also has the sort of personality that rubs some people the wrong way. So there are also quite a few people in his own party and the media who resent him or have a bad history with him. This is besides the people who fiercely oppose him on ideological grounds.

Now for the first time in his life he will shift to government accommodation with the highest category of security. His morning walks in Lodhi gardens have stopped, even if it was often joked that he spent more time chatting with other park patrons than walking. Now he will have to walk alone at least some of the time, though he could always call a friend. He’s apparently been allotted a house that has a walking track.