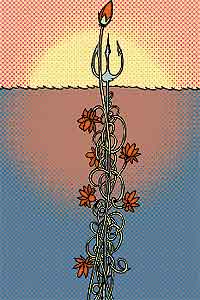 Recklessly spotting a trend, can one say of 2003 that it was a turning point in Indian politics? That it was the year the BJP matured, shedding some ideological baggage that was becoming increasingly embarrassing to a party aspiring for national leadership? In some ways, it is a remarkable sea change and an act of political will rather than accident. One has only to compare two key events—conveniently occurring at the beginning and end of '03—to get a measure of this transformation. Compare the BJP's spectacular victory in the Gujarat elections in December '02, unabashedly on the Hindutva card, with the victories in the December '03 polls. The electoral idiom consciously chosen for the second occasion was quite different. Quite obviously, the BJP has travelled a long way in a year.

As in December '02, so in December '03. The pollsters' predictions were proved spectacularly wrong. In all fairness, predicting the behaviour of the Indian electorate is a hazardous enterprise, given the inherent limitations of an electoral system in which the percentage of votes polled is markedly out of step with the number of seats won. In Chhattisgarh, for example, the BJP's total voteshare in '03 was less by a per cent point (39 against 40.1 per cent in '98) and yet it won 13 more seats than the Congress' 36 in '98.

However, taking this distorted reflection of 'popular will' as a constant operating equally on all contestants, there has been implicit in the totality of the results a discernible 'wisdom' of choice—whether it is a case of applause or punishment of the record of the incumbent parties in power or, speculatively, of the faith in the promises made for the future.

In retrospect, two features of the BJP's campaign strategy lend support to the hypothesis that, as a political party, it is in a momentous transition. First, it has abandoned (hopefully for good) the divisive rhetoric of Hindutva as a non-negotiable minimum of its ideological identity. This was evident in the deliberate abandonment of any reference to Ayodhya and its associated fundamentalism. In fact, when during the early stages local leaderships had tentatively attempted to play it up, they were told sternly by the national leadership to lay off. Even Narendra Modi was firmly told at some point to keep his enthusiasm to himself.

Instead, the campaigners concentrated on local socio-economic issues, famously capsulated in BPS—bijli, paani, sadak—the last a particular enthusiasm of Vajpayee as evident in his obsession with the 'golden' quadrilateral road project. And, given the failure of earlier Congress governments in these areas, the rhetoric evoked a sympathetic chord.

The second feature was the active involvement of a middle-order BJP leadership in the planning and execution of campaign strategy. Though both Vajpayee and Advani had a certain visibility as father figures, the nitty-gritty and slanging matches of the actual constituency battles were left to Arun Jaitley, Pramod Mahajan and their ilk. Jaitley was at his combative best, using his undoubted forensic skills to convince the voters of the dismal record of the incumbent governments. Mahajan, on the other hand, was at his "backroom boy" best, preparing detailed psephological profiles of all the Rajasthan constituencies to ensure victory. Thus, paradoxically, the party with the historical image of a backward-looking ideology has apparently reinvented itself as "modern", at least in electoral management. In comparison, the Congress campaign style was widely perceived as amateurish playing it by ear.

So what do these results portend for the future? Will the BJP's current streak of luck endure till the LS elections? Only a rash trendspotter will predict this with assurance.In the first place, the assembly constituencies in the three states in which the BJP has done well are congruent with 76 LS constituencies. Of these, the BJP's victories will cover around 66 LS seats, about 12 per cent of the total. This is too narrow a sample for forecasting the outcome of the national contestation involved in the Lok Sabha elections. More importantly, even in the Hindi heartland there are states like UP and Bihar where the BJP has to contend with well-entrenched competitive votebanks, such as those of the two Yadavs—Mulayam and Laloo—even if one were to ignore down-in-the-dumps Mayawati's Dalit fiefdoms. Thirdly, south of the Vindhyas the BJP presence has at the best of times been negligible.

So before hubris takes over as the BJP's dominant mood, these ground realities will have to be reckoned with.Two consequences of the BJP's performance are worth notice. First, the BJP has realised there is no electoral future in espousing the wilder lunacies of Hindutva. Secondly, Vajpayee now has an unassailable authority with Advani as his willing deputy, despite occasional rumours about his discontent with this dispensation. In many ways, the BJP today is the mirror image of the Congress of the early decades of Independence. As a corollary, the Vajpayee-Advani duo bears a family resemblance to the Nehru-Patel joint leadership till Patel's death. With the two of them and the emergent talented second line of leadership, the BJP has established itself as the most important political party in India today.
(The author is ex-editor, Indian Express)

LOOKAHEAD
Clearvoyance ! Coming Up Next

Broken Shard Of A Nation's Mosaic