As the Lokpal Bill gets mired in a tortuous birthing, the debate shifts to who exactly has the right to pass a law 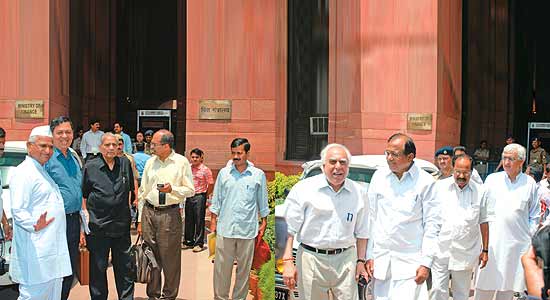 Besides Lokpal Bill, politicians have sparred with civil society on four key pieces of legislation

A few days in June have never looked so different from a few days in April. Two months ago, when the crowds had begun to swell at Jantar Mantar in support of a fasting Anna Hazare, the mood of the citizens was upbeat, the media unquestioning and a scared government anxiously monitoring upcoming elections in five states. As the din over corruption grew, the Congress finally acceded to the demand of setting up a joint drafting committee including civil society representatives and government nominees for the proposed Lokpal Bill. The exercise was to lead to the formation of a body that would address corruption in high places.

“The government has not consulted us. We are only observers. Whatever we have to say, we will say it in Parliament.”
Arun Jaitley, BJP leader

By June, when Baba Ramdev took stage to roll out his version of the hunger strike, the assembly elections were long over. The government, which had seemingly capitulated, now reversed and progressively hardened its stand, jeopardising the very creation of the Lokpal Bill. The language its ministers employed became tougher, and the non-government representatives on the drafting committee were left fighting a rearguard action. Union minister for human resources Kapil Sibal, who is also part of the committee, fired the first of many salvos when he said the government would go ahead with drafting the bill even if Hazare’s team boycotted meetings, which they did last week after Ramdev’s fast was busted in a midnight operation.

Between April and June, the summer had seen a distinct shift in the balance of power between government and civil society. First, there was the smear campaign against the father-son duo of Shanti and Prashant Bhushan. When that failed, ‘civil society’ itself was sought to be divided. Soon enough, it ceased to be a battle between civil society and the government and became a struggle between a few members who called themselves civil society and virtually the entire political class. Opposition parties like the BJP and the Left felt that democracy and the supremacy of Parliament was being subverted by a few unelected “anarchists”. Congress spokesperson Manish Tewari took the argument further to say, “Under the Westminster system of democracy, it is the right of the government to propose legislation and the sovereign right of Parliament to agree or dispose. So if anybody is under the misconception that they will be able to impose their will over the collective sovereign, then they are living in an illusion. Consultation does not mean the power to veto.” Tewari also made it clear that the UPA government had been, and will be, accommodating. “The National Advisory Council (NAC) was an attempt at constructive engagement. But can we give in to anarchists masquerading as civil society? We need to make a sharp distinction between anarchists and civil society.”

“If anyone thinks they will be able to impose their will on that of the collective sovereign, they are living in an illusion.”
Manish Tewari, Congress spokesperson

What exactly is “civil society”? One definition says the “term is understood to define a space and a sphere of action that exists between the private sphere, the economy and the state. Acts in this sphere are based on a minimum consensus of norms that include tolerance, fairness and freedom from violence”. Far from being a homogeneous mass it is normally understood to be, civil society comprises different shades of opinion. Where the Right can go with the Left and fight a common cause. Where Hazare & Co or the Ramdev brand of mass upsurge—one legalistic and moderate and the other unpredictable and extremist in nature—can sit together comfortably in a united fight against corruption.

But it isn’t civil society per se as much as the proposed Lokpal Bill that has invoked the wrath of the politicians across the board. This is perhaps because it will make elected representatives and the bureaucracy accountable should they indulge in corrupt acts. And the disagreement with civil society on the exact contours of the bill is what has forged a consensus between sworn enemies and the Left and the Right. No one is supportive of the tough clauses that the civil society representatives want included and the manner in which they want to dictate terms while drafting the bill. Neither do the politicians like the idea of presuming their entire class to be corrupt. 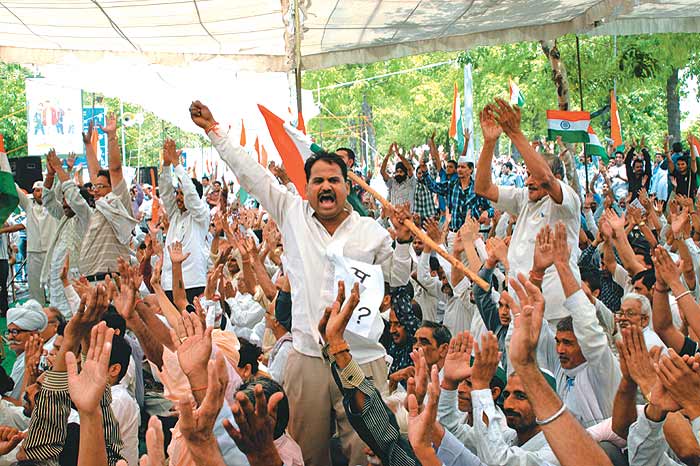 Says D. Raja of the CPI, “Painting all politicians with the same brush is not good for democracy and can lead to anarchy, which in turn breeds fascism.” Raja’s concern stems from the basic premise of Hazare’s movement that all politicians are corrupt. He also feels the coercive tactics of the group in forcing itself on the government and drafting the Lokpal Bill do not augur well for democracy. “It’s the government’s job to draft a bill and present it to Parliament and it is here that the bill should be debated and discussed. What is this civil society which is co-drafting the bill with the government? What is its sanctity?” Raja urges civil society groups to be a little cautious in their approach and advises the government to “consult political parties first before introducing a legislation”.

“No one is denying the importance of civil society, but passing laws is the preserve of the elected representatives of the people.”
Sitaram Yechury, CPI(M) leader

CPI(M)’s Sitaram Yechury is also critical of the government for forfeiting its responsibility to take the political parties into confidence before putting the bill to debate. “You cannot send a list of objective-type questions on such a serious issue like the Lokpal Bill and expect parties to answer,” he says. “No one is denying the importance of civil society, but passing laws is the preserve of the elected representatives of the people.” The objective questions Yechury is referring to pertain to a letter that Union finance minister Pranab Mukherjee sent last fortnight to political parties and chief ministers with an appended questionnaire on the bill. Many non-UPA CMs have written back either complaining about the questions or wondering why political parties were not consulted during the drafting process and now being used as a convenient afterthought.

Union home minister P. Chidambaram, in an extensive interview to Doordarshan, said, “I support civil society speaking up, raising its voice. But I do not support elected representatives yielding their obligations and responsibilities to civil society representatives. Let’s remember that the foundation of this country is parliamentary democracy.”

But why has civil society mobilised itself now on the corruption issue? Explains political sociologist D.L. Sheth: “There are moments when a more generic voice takes root and allows civil society to mobilise itself like now.” Going by Sheth’s observation, the efforts of Anna Hazare and even Ramdev could qualify as movements where effective mobilisation took place to rouse the state from slumber. The recent spate of mega scams only amplified this systemic apathy. Money that could have been better spent on education, food and health was pocketed by a handful of people in power—corruption that was assiduously brought to light by a vigilant media chronicling their actions. “When people begin to see the government being treated as a jagir by those who they elected,” says Sheth, “they resent it. Legislative and bureaucratic power can become defunct if not countervailed by civil society.”

And it was the UPA government itself which had opened its doors to civil society and gave it the legitimacy previous governments had not. This it did in the first term of UPA by setting up the NAC, which has since been poring over tens of thousands of important legislations (see graphics). Activists like Medha Patkar and Sandeep Pandey say the creation of the NAC was a good sign in that it brought in sections of people who had fought at the grassroots level for people-friendly policies into the mainstream where they are in a position to act as pressure groups. So even as some politicians blame the government for outsourcing its work of drafting legislations to the NAC, activists welcomed its creation. Says Medha Patkar, “The NAC is only a drafting committee, not a passing committee. Moreover, issues like corruption require a perseverance that political parties don’t have. Ultimately, Parliament has to pass legislations.”

This breed of activists is now finding itself at odds with other members of the civil society. It is not that they do not want a strong anti-corruption mechanism, but they are not comfortable with the methods employed by Hazare’s team. “We support everything Arvind Kejriwal and Prashant Bhushan have done so far,” a member of the National Campaign for the People’s Right to Information (NCPRI) told Outlook. “But we also detect a certain intolerance for contrary views and at times they do end up trivialising some of the positions that we have taken on the draft bill.” 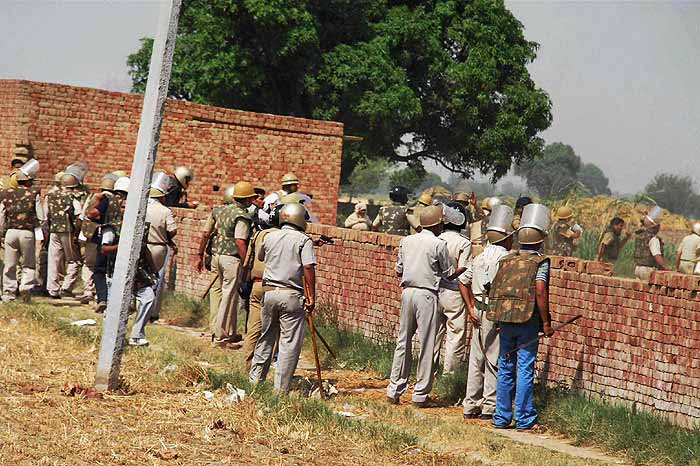 An amalgamation of many opinions which came together to create the Right to Information Act between 1996 and 2004, the NCPRI today cannot see eye to eye with Hazare’s team. Its convenor for several years, Shekhar Singh, recalls, “We went through several processes. It is a myth to believe that a law can be drafted with 1,00,000 people. When we worked on the RTI Act, we made a draft and then met people. If we got a negative feedback, we would reflect and redraft it. But the idea was to incorporate greater diversity and take the most prominent voices coming in.”

“I feel there should be a greater debate within civil society on a crucial issue like the Lokpal Bill. I hardly see the debate.”
Justice A.P. Shah, Former Delhi HC chief justice

Senior bureaucrats are now adamant that no inch will be conceded to Hazare’s team any more. “This is like blackmail. Tomorrow, the Maoists could also operate in a similar manner. Would you expect us to give in to them as well? Can we use hunger strikes to decide an agenda or draft a bill?” asks a senior bureaucrat familiar with the drafting process. But Kejriwal, who is in many ways the driving force behind the bill, points out to several inequalities in the current discourse. “We are in an unequal position in the drafting committee. We keep making suggestions and the government keeps ignoring us. We even asked for a public debate on some of the contentious issues which could be telecast live. They refused. Is that democratic?” The panel member also points out that they are not trying to subvert democracy or the legislative process, but to broaden and deepen it. “Isn’t democracy supposed to be more participatory than this? It’s not just about elections. Does that mean that once I have elected an MLA or an MP, he becomes a dictator for the next five years?”

Eventually, as Sheth says, civil society has its own legitimacy and accountability and this it draws from the causes it espouses. Nobody will embrace a cause that doesn’t sound credible. For now, corruption and the move against it is credible, for it has the ringing endorsement of thousands of Indians.