How the glimmerati shim-sham-shimmied, beat the dhol and socialised with sharks 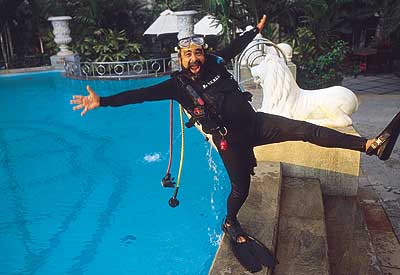 Prahlad Kakkar
The most fun I had this year was in the bed. But since I may lose some people who are close to me if I recount it, I'll instead reveal this year's most non-sexual fun. I scuba-dived 46 meters, not a very safe depth. I had undergone surgery too. It was in November when my wife and I and two friends went to Lakshwadeep. The spot was 5 km from the shore. The visibility there was 150 feet. We touched down on top of a cave. As we went in, we spotted 11 sharks. They were sleeping. But there were other big guys who came along to look at us and go away in disgust. After about five minutes, wife signalled me to go up. The rest had fun for one more minute.

Amar Singh
The most enjoyable time I had was on January 26, my birthday. Amitabh and Jaya Bachchan, Subrata Roy, Anil and Tina Ambani, Rajan and Ritu Nanda, Randhir Kapoor, Karisma and Abhishek, and my wife Pankaja and I, all of us got together at Shweta Nanda's residence. Brian Silas played haunting melodies from the past. Everyone sang Shammi Kapoor songs. November 1, Amitabh's 60th birthday, was another wonderful evening. I hosted a party for him at the J.W. Marriot, Mumbai. The normally introverted Amitabh sang and enjoyed himself.

Virender Sehwag
You could say it's been an exciting year for me, though I am not too sure if it has started or is beginning to end. I was injured in the Delhi Test against Zimbabwe and couldn't be a part of the Test squad in the West Indies. I began to get a bit regular with my fans in England, in Sri Lanka and then in the home series against the West Indies. Things haven't been too good in New Zealand. I don't find it funny at all. The Test series in New Zealand has made me hungrier for runs and I can promise some treat for my fans in the coming one-day series as well as the approaching World Cup in South Africa.

Anoushka Shankar 2002 was my busiest year. And some of the concerts stand out in my memory. I finished my solo summer European tour closing the three-day WOMAD Festival at Reading, UK. I played under a psychedelic tent for over 10,000 young people. In September, my father had his first show of 2002 and after a long hiatus it seemed like something welling up inside him had burst! We also took part in 'The Concert for George' in London, a year after George Harrison's death. Eric Clapton organised it with Uncle George's wife Olivia and son Dhani. Paul McCartney, Ringo Starr, Tom Petty, Jeff Lyne were all there. It was a beautiful way for us to come together.

Gadar
This year, I enjoyed watching ordinary people stand up for their rights. Be it women's groups or ordinary members of the middle class, more and more people are now beginning to fight for their rights. This year in Sadashivpet, Medak, a local, picked up by the cops, died in custody. The entire village stood up in spontaneous protest, they stormed the police station and forced the policemen to flee. This spontaneous reaction of the ordinary people gave me so much pleasure.

K.P.S. Gill
Just last week, on our last evening in Perth, where we had a meeting of the International Federation of Hockey, about 8-10 of us—including Kumar Singh Badal, an importer-exporter with a passion for music—got together.Here, I caught my first glance of the Indian Ocean. We were all nostalgic by the time we reached a riverside restaurant, where Kumar began to sing. First he sang Hindi songs and then switched to Punjabi verse by Shiv Batalvi, a former revenue officer and a Punjabi. All of us, before we knew it, were dancing. Others in the restaurant, including Australians, also joined in.I think this was the most unexpected fun I had this year.

Baichung Bhutia
My Scotland holiday in June was the most exciting, I was driving with my girlfriend Madhuri. We always landed at the wrong places and stopped only for bread, butter and coffee. I also had fun when I signed up for Ten Sports and stayed at a beach-side hotel in Dubai. We got friendly with a few Europeans and took a bet with them to play a three-a-side match. They didn't know we were professionals. They lost the game and we had a good meal at their expense that night.

Zohra Sehgal
This year my greatest source of fun has been playing with my nine-year-old great-great grand-daughter. She refuses to call me Badi Nani. She calls me Ami, like the others do. The Spirit of Anne Frank has been a great experience. The lines I forgot got so many laughs. And yes, I've flirted a bit more this year. In June I was called to the UK for 'An Evening with Zohra Sehgal'—they always pronounce it Segal—in a new theatre called Stratford Circus. A film in which I play Govinda's grandmother and go around on a motorbike with a pistol killing all his enemies is supposed to be out this year.

Bipasha Basu
This year the most fun thing that happened to me was that Raaz was the most successful film of the year. The fun came from the fact that it was a small film and its stupendous success was a total surprise. It changed the perception people have of me as a glamour commodity. The kind of films I want to do—not just the stereotyped falling-in-love ones—are now coming my way. This year, there was a lot of happiness for me in terms of career and on the personal front.

M.F. Husain
Fun, that can be phan in Urdu. What was most enjoyable for me, sheer ecstasy, was making Gajagamini. But that was last year. This year? Yeh joh Bijli giri thi (referring to the painting titled Bijli which sold for Rs 2 crore), it was like lightning. When I made it over 30 years ago it was worth Rs 10, now in the year 2002 it's gone so high. Fun for me, before Bijli, was to see Devdas. It's the height of kitsch, such powerful kitsch. Kitsch may not be great art but it's a great happening. I've seen the film at least 12 times. The epitome of the last 200 years of culture in the US has been Andy Warhol. Here it's Devdas and I am not joking.

In The Land Of Babycakes