A warily hopeful Pakistan considers life beside a Modi-led India 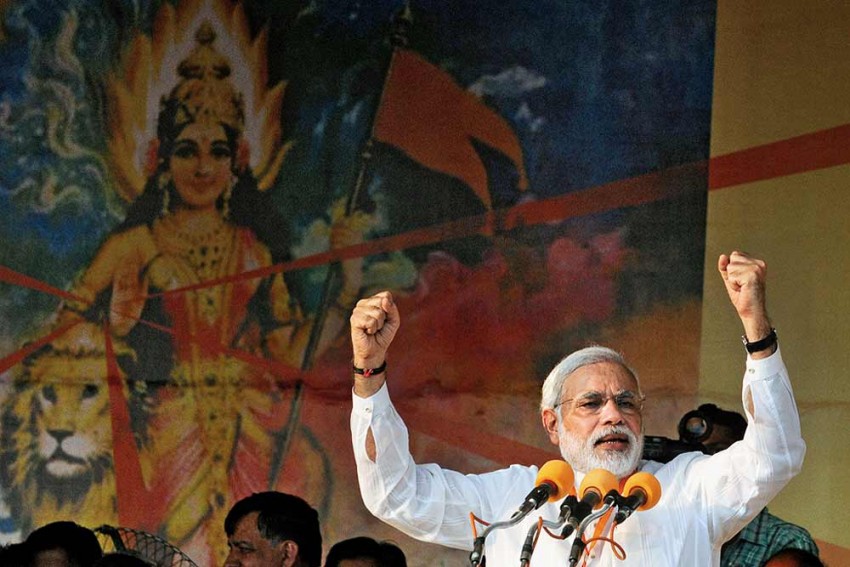 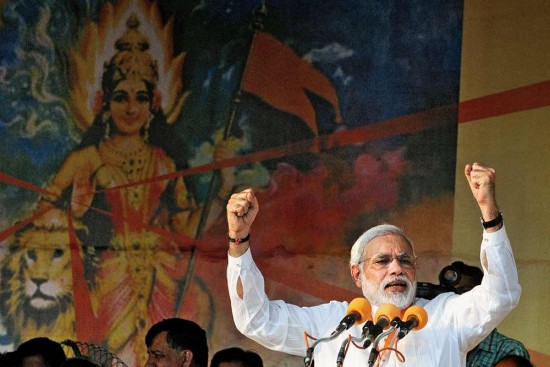 The Pakistani street has taken notice—the neigbour is election-bound. The first signifier has been the augmented levels of bashing the old bugbear—Pakistan—by the front-runner. It has the average Pakistani appalled and bemused, especially since its own poll-bound leaders had advocated peaceful, enhanced ties with India.

While a BJP government is remembered here as one that showed great political will and initiative to improve bilateral ties, its prime ministerial candidate in 2014, Narendra Modi, is not fully understood in Pakistan. “There are too many unk­nowns about Modi, a polarising politician in India, and about his foreign policy team. There is a sense of apprehension about what a Narendra Modi victory would mean for India-Pakistan relations. The muscular nationalism he represents could translate into a hardening of India’s stance on issues affecting ties,” former Pakistani diplomat Maleeha Lodhi tells Outlook.

Any good intent the Manmohan Singh-led UPA might have had towards building good ties with Pakistan fell victim to the 26/11 Mumbai attack, but former Pakistani ambassador to the US, Sherry Rehman, says her country has a duty to fulfil too. “The sense is that official Delhi’s studied ‘peace fatigue’ over a revival of the composite dialogue over the last two years will continue unless Islamabad changes the game on penalties for Mumbai,” she wrote in The News.

“Pakistan’s role as a pivotal player in South Asia is restored...any new Indian government will have to cope with that.”
Mushahid Hussain, Senator, PML(Q)

Actually, none can dismiss the possibility of another 26/11. Though a tenuous ceasefire with the Taliban drags on, there are no signs that the Punjabi jehadis have been restrained or that ghq in Rawalpindi has cut off long-fostered support to them. As their involvement in Afghanistan scales down, these jehadis will have lots of spare time. In the eventuality of a terror incident, Pakistan can be wary of a divisive figure in New Delhi. “What is worrying is that whatever the numbers, given the high-octane right-wing discourse fuelling rhetoric on a corporatised Indian media, all bets on a Manmohan-like restraint (as after 26/11) amid a possible crisis with Pakistan may well be off,” warns Rehman.

But any leftover bonhomie towards India is itself wearing thin in Pakistan. Many here have taken to ridiculing Nawaz Sharif for his so-called ‘petticoat’ policy of ‘appeasement’. Former foreign secretary Riaz Khokar says that Modi should not be invited to Pakistan, as he is no moderate Vajpayee.

“If Modi wins, he will be a prisoner of the RSS, the Hindu fundamentalist and fascist organisation. The RSS, which has brought him this far, is anti-Muslim and anti-Pakistan. Modi is anti-Pakistan, and will show no flexibility or pragmatism on substantive issues between the two countries,” says Khokar of Modi’s ideological moorings.

In contrast, the Jamiat Ulema-e-Islam (Fazl) chief Maulana Fazlur Rehman, who met Vajpayee in a 2002 visit to India, has no misgivings over a BJP-led government. “We do not share the nervousness in many quarters that if the BJP wins, it will seal the fate of any revival of composite dialogue with Pakistan. Their anti-Pakistan rhetoric is merely campaign posturing. They may be more willing to talk to Pakistan, as history suggests, depending on the size of its victory”, JUI(F) spokesman Jan Achakzai says.

Indeed, as in any polls, the BJP’s room for manoeuvre depends on its performance. Lodhi agrees. “The political complexion and stability of the next government will have a bearing on the speed and content of the normalisation process with Pakistan,” she says. 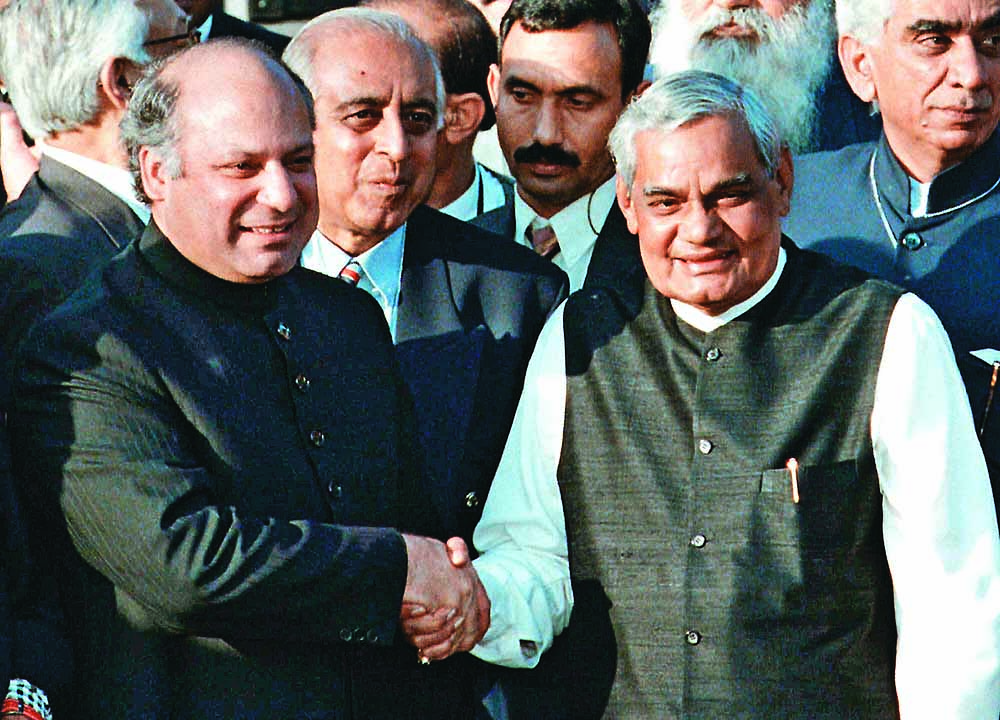 Other voices point to the keenness of the Nawaz Sharif government for a breakthrough in ties, surmounting the kind of bureaucratic and political obstacles which paralysed the UPA in New Delhi, especially after the 26/11 attacks.

Some in Pakistan hope the adoption of Modi’s ‘Gujarat model’ might translate into smoother bilateral ties.

Senator Mushahid Hussain says that the weak and embattled Congress has effectively buried itself between a resurgent BJP and the sudden challenge of the AAP. “The positive thing is that in South Asia in 2014, Pakistan’s role as a pivotal player has been restored, with both China and US wooing Islamabad; in the aftermath of the Crimean crisis and Middle Eastern turmoil, Pakistan’s room for diplomatic manoeuvre has expanded, a reality any new Indian government will need to cope with,” says Mushahid.

Many Pakistani analysts also see hope in Modi’s ‘Gujarat model’ translating into smoother bilateral ties with Pakistan. Back from a recent trip to India, senior journalist Amir Mateen says he sees an India obsessed with economic issues, which may tempt Modi towards political concessions. “Particularly so when it desperately needs to revive economic growth from under five per cent to levels where it could pretend to compete with China,” says Mateen.

Agrees Gen Athar Abbas, also a recent visitor to India: “Eventually, corporate interests will take over and move tow­ards normalisation of ties with Pak­istan.” However, he questions the tendency to regard Modi’s premiership as an inevitability. “Modi is faced with a lot of resistance from within; that may create obstacles for getting the prime minister’s slot,” he adds.

Shaheen Sehbai, executive editor at The News, which called Modi “a particularly noxious figure” in an editorial and added that “...the BJP will pursue an anti-Muslim agenda”, tells Outlook, “Although he would show his muscle to hustle Muslims, Kashmiris and Pak­istan, sooner than later, Modi will be tamed, since as prime minister of a country with high economic, regional and international ambitions, he cannot afford to behave like a guttersnipe.” Sehbai says that Modi needs to “grow faster”, before he does lasting damage to India-Pakistan relations.

However, theories about Modi prioritising the economic front—and that leading to better India-Pakistan ties are being questioned. “The apprehension is, which part of the ‘Gujarat model’ will prevail? Will his aggressive Muslim/Pakistan-bashing triumph or will his regional foreign policy outlook be determined by business and economic considerations?” wonders Mushahid.

Rehman says that even if Pakistani democrats see “regional cooperation as the future, albeit on mutual terms, in India, even outside an election cycle, the Lok Sabha can rock with a nationalism that chokes dialogue with Pakistan”. Even if one were to concede that the challenges of being PM would ‘tame’ Modi, how ‘easy’ would it be, asks Lodhi, for a BJP government “to be able to make diplomatic compromises to Pakistan while not being on the defensive over its Pakistan policy?”

“The key question for Pakistan,” says Lodhi, “is whether the next government in New Delhi will agree to revive the broad-based ‘composite’ dialogue or persist with an approach that limits the bandwidth of talks by cherry-picking issues only of priority for India.”

The debate rages on in Pakistan. Meanwhile, a tongue-in-cheek Gen Abbas slips in a fast one. “I see Modi less as a Pak­istani headache and more of a pain in India’s neck,” he says.

A senior Pakistani journalist based in Islamabad, Mariana Baabar writes for Outlook and The News