Through A Gap In The Don’s Bend

The cult of 99.94 endures, but Sachin has had a greater impact on the game 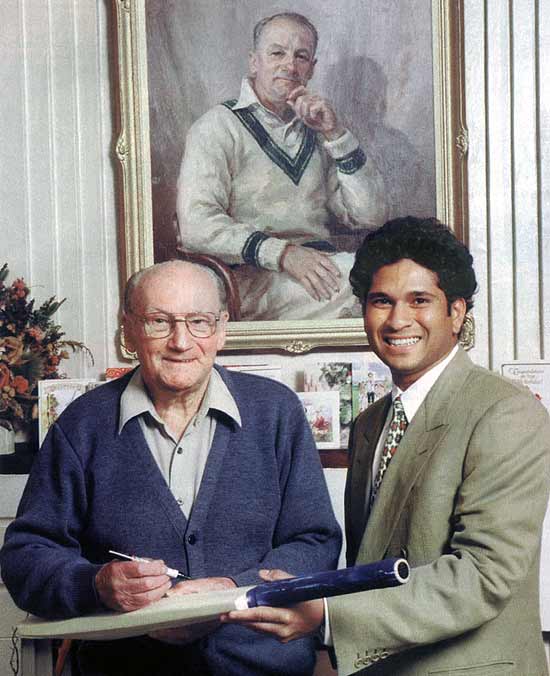 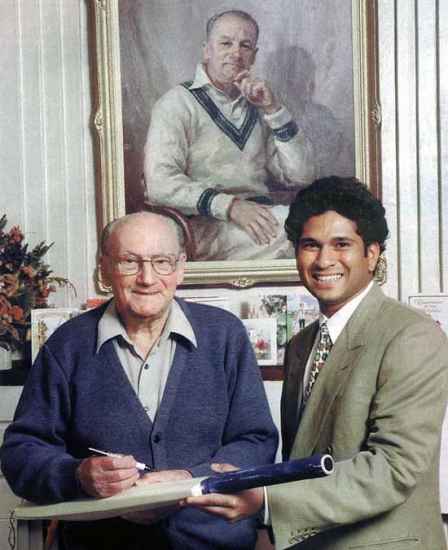 In November 2010, the Indian team arrived in Australia for a four-Test series. Led by M.S. Dhoni, it had just suffered a humiliating series defeat in England. With the return of champion batsman Virender Sehwag, the Indians were expected to do well against an Australian side going through a spell of generational change.

The expectation was heightened by the arrival of Sachin Tendulkar. On his fourth tour of Australia, the Mumbai maestro was perched on 99 international hundreds. He was expected to notch his hundredth during the series and in doing so become the first player in cricket history to achieve this milestone.

The promise of Sachin reaching his ton-of-tons sparked the speculation whether he was greater than the all-time great, Don Bradman. A mathematically minded academic had crunched the numbers and concluded that Sachin’s mastery of the limited-over format, and his 50 Test centuries, placed him numerically ahead of ‘The Don’.

But the high expectations around the tour failed to fructify. The Indians were trounced 4-0, and Sachin failed to achieve his milestone. After a 370-day wait, he did finally score the keenly awaited century in an Asia Cup ODI against cricket’s minnows, Bangladesh.

The former West Indian champion batsman, Viv Richards, was more circumspect, rating Bradman as “the greatest of them all”, though he considered Sachin “in top flight” the best he had seen.

But perhaps the most perceptive remark came from Sachin’s contemporary, Rahul Dravid. He argued that Tendulkar “set a benchmark for future generations which, probably, would be almost impossible for anyone to emulate”. Along with Bradman’s average of 99.94, his ton-of-tons was “the most memorable feat that any cricketer has achieved”, Dravid added.2

Dravid’s comment emphasised that cricketing greatness requires iconic statistics that set the great players apart from the pack. With the passing of those who saw Bradman bat, his career will become post-memory, and so statistics will assume greater importance. Bradman’s great achievement was his batting average of 99.94. His nearest rival of note, the South African Graeme Pollock, is thirty runs per innings adrift of the figure, while most other great batsmen, such as Tendulkar, hover around the mid-fifties. 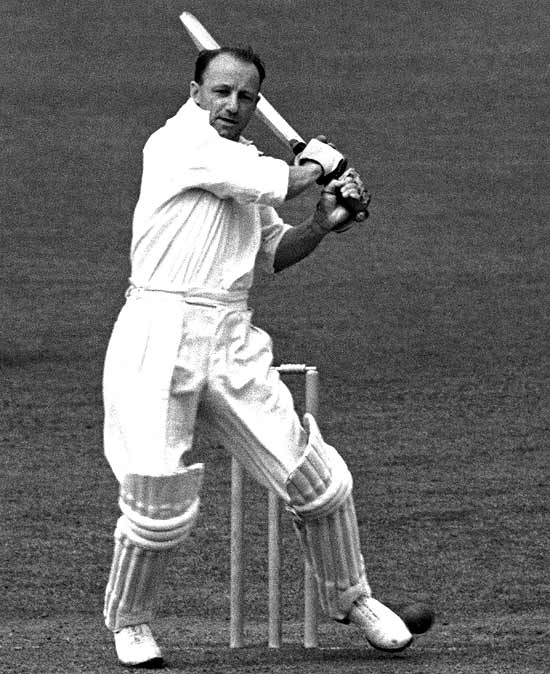 Pull of the drive Bradman at Trent Bridge, Nottingham, in 1948. (Photograph by Getty Images, From Outlook 29 April 2013)

Unlike Sachin, Bradman never went through a series without scoring a Test century. Even at his lowest point—the 1932-33 ‘Bodyline’ Ashes series—he scraped a century at Melbourne and averaged 56.57, a figure which exceeds Sachin’s current Test average of 54.46. Though Sachin was the first batsman to blaze a double century in an ODI, in his heyday Bradman (like Lara does now) held the record for highest first-class (452) and Test innings (334) scores.

Bradman’s record-breaking 334 (the highest Australian Test score for long) during the 1930 Leeds Test has become another of Australian cricket’s iconic numbers. Scoring over three hundred in a single day, the innings was an uncommon mixture of skill, determination and endurance. When Mark Taylor replicated (but declined to pass) Bradman’s score against Pakistan in 1996, he added to the figure’s iconic status.

Though Mathew Hayden broke that record (380) against a club standard Zimbabwean attack in 2003, his score hasn’t reached the iconic status of 334—and never will. The latter bears the imprint of the mighty Don, its mythic standing enhanced by Taylor’s decision.

Despite scoring over 15,000 Test and 18,000 ODI runs, Sachin has not played a statistically iconic innings. His highest Test score of 248 lags behind in the list of substantial Test innings, while his ODI double ton has been swamped in the welter of meaningless 50-over fixtures. While Bradman trumped Sachin’s 248 on six occasions and passed 200 twelve times in his 52-Test career, Sachin has only exceeded 200 on six occasions in 196 Tests.

In 2000, when cricket writers, players and administrators mulled over the greatest players of the past century, Bradman was the pick ahead of Sobers and Hobbs. The only contemporary player included in the mix was Shane Warne. Any claim that Sachin rivalled the Don was quickly dispelled by a quick glance at the numbers. Sachin’s Test average at the time was on a par with Bradman’s during the Bodyline series.

For those peddling the line that Sachin is greater than Bradman, the numbers don’t just add up. Bradman is statistically superior, despite Sachin’s ton-of-tons. But numbers alone do not tell the full story. Bradman may have achieved the unconquerable average, but Sachin’s contribution to the game has been far more significant.

The continued cult of ‘The Don’ is a hangover from the game’s ‘classic’ days, as well as Australia’s imperial past, when Britain was ‘home’ and an Australian with any worthwhile ambition craved acceptance in London.

Bradman was such a man. A committed Anglophile, he was as much at home in England as he was in suburban Adelaide. His feats at the crease opened doors for him to royalty and the Empire’s grandees, entertainers and businessmen. Indeed, by the time of his retirement in 1948, he was one the most famous people in the British Commonwealth, feted and lauded wherever he went. 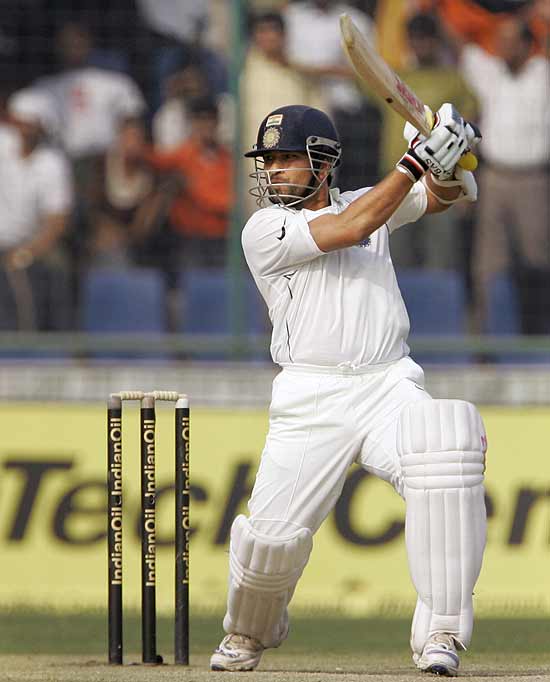 Pull of the drive Sachin at Ferozshah Kotla, Delhi, in 2007

As a hero, he was a natural fit for the former Australian Liberal prime minister, John Howard. An avowed monarchist and ‘cricket tragic’, Howard adored the Don. In the inaugural 2001 Bradman Oration—now a feature of the Australian cricket calendar—Howard spoke of “the quality of the man which has elevated [him] to the status of the greatest living Australian”. His feats at the crease during the great Depression had “reminded Australians that they were capable of great things, in their own right—at a time when confidence [had] ebbed away from their collective soul”. 3 For a dominion dependent financially and strategically on Britain, Bradman showed ‘the Poms’ Australians could beat them at their own game.

Bradman’s career reflects this Anglocentric stance in Australian cricket history. He rarely strayed from the travel routes that linked Australia to London. But, in 1953, he stopped for a few hours at Calcutta’s Dum Dum airport and fended off questions from the press pack before flying to London to cover the Ashes series for British and Australian newspapers. It was the only occasion Bradman set foot in India. He was not one for cric­ket’s developing world.

Despite the claims of Bradman hagiographers, he was not a good or far-sighted administrator. Bradman sought to keep white South African cricketers in international cricket during the 1970s and he failed to see the Packer revolution coming. With his English cricketing cronies, ‘Gubby’ Allen and Doug Insole, he was part of the white colonial elite that ran world cricket. By Bradman’s death in 2001, this elite’s hold was all but spent, as Indian money began to buy the game.

In an increasingly multicultural Australia, cricket and the Bradman myth still sell books. But they are both being challenged. Soccer, which is more reflective of the changing face of Australian society, has made inroads into cricket’s traditional summer market. New sporting heroes are emerging—such as Sydney FC’s Alessandro Del Piero—while old heroes like Bradman are receding, no longer relevant in the ever-evolving global sporting marketplace.

Sachin Tendulkar, however, is a product of that marketplace and hence a far more significant figure than Bradman in not just cricket but world sport. His career has spanned the emergence of India as a global economic and strategic player. When Sachin commenced his career, the Indian economy was highly regulated and shunned foreign investment, while Australian and English cricketers considered the subcontinent as the game’s backwaters.

The economic liberalisation of the early 1990s changed this. Fuelled by foreign investment, an increasingly cashed-up middle-class and a far-flung diaspora, Indian cricket flourished. By the end of the decade, Sachin was the game’s best paid player and most sought-after commodity, while the Indian ODI shirt was the highest-valued piece of sporting apparel on the planet. With the deregulation of the media and the growth of satellite telecasts, Indian cricket filtered through its disapora into previously non-cricket markets, increasing revenues and transforming Sachin into the game’s first global cricket hero and a symbol of a new assertive India.

Sachin was fortunate. By the mid-noughties he was part of a batting line-up that was arguably the most powerful in the game’s history. In terms of Test runs scored, it was the equal of—if not better than—Bradman’s 1948 ‘Invincibles’ that toured England undefeated. As the Indian team’s pre-eminent batsman, Sachin became a god amongst gods, the most sought-after cricket player ever to take guard.

Given Sachin’s global prominence, Bradman’s mythical aura has begun to dim. Even the museum at his hometown of Bowral, which once brandished his name, has been rebadged as the International Cricket Hall of Fame to broaden its appeal to the post-Bradman generation.

Selected top in a public poll of the Hall’s ‘greats of the game’ is Sachin, trumping Bradman on his own turf and showing that cricketing greatness cannot be reduced to a few iconic statistics.4 Over time, the most identifiable—and most unattainable—feature of the Bradman myth may well become just the figure: 99.94.

Sachin’s greatness as a batsman is more nuanced. Notably, by the longevity of his career and the fact that he has been, and remains, India’s greatest in the period of its emergence as the world’s leading cricketing nation.

(Dr Tom Heenan and Dr David Dunstan are historians, researchers and teachers of sport at Australia’s Monash University. They are writing a new biography of Sir Donald Bradman.)