In the backdrop of the electoral gloom and Vajpayee's obduracy, the RSS frets over its declining influence 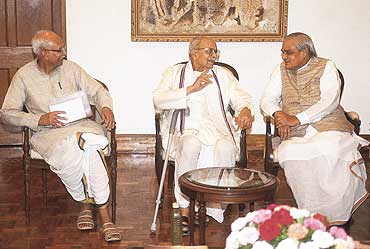 outlookindia.com
-0001-11-30T00:00:00+0553
The Sangh parivar, it seems, has encountered a problem in keeping up with its usual practice of having and eating its cake at the same time. Frustrated in their attempts to dictate terms to Prime Minister Atal Behari Vajpayee, for the first time, some influential voices in the rss are beginning to articulate the opinion that they should risk jettisoning the government as Vajpayee's leadership (and the economic policies of his government) is proving disastrous for his 'kinsfolk'.

Highly placed sources reveal that couple of months ago, when the Tehelka scandal broke and the rss upped the campaign against Vajpayee and the pmo, the parivar was ready to throw its weight behind L.K. Advani if he would challenge the prime minister. At that time the view was that if the government goes, let it go, but the parivar could no longer back Vajpayee.

But the rss came up against an unexpected roadblock. The home minister steadfastly refused to take on Vajpayee—he has told the rss leadership that any such attempt would be foolhardy. For, not only would it threaten the nda government, it would also harm the party and the parivar. Advani, who sees himself as the bjp's architect, sees no long-term gains in such an attempt.

The rss then toyed with the idea of propping up Murli Manohar Joshi as a prime ministerial candidate but eventually abandoned it because Joshi has too many foes within the bjp and has too hardline an image. Says a bjp cabinet minister: "Advani is in the way. As long as he is there, no other leader can be propped up and he refuses to go against Vajpayee." rss leaders have also been ruing Advani's decision to unilaterally declare Vajpayee the prime ministerial candidate. Now that the parivar is stuck with Vajpayee, a top level Sangh leader and bjp cabinet minister says: "Hum na to nigal sakte hain na chaba sakte hain (We can neither chew nor swallow this)."

The Sangh also views Vajpayee's peace initiatives with Advani in this context. Says an rss strategist: "You people keep writing that Advani is taking on Vajpayee. Actually, Advani has inflicted Vajpayee on us and is now in the way of us taking him on." The upshot is that the Sangh will continue its schizophrenic relationship with the Vajpayee regime—on the one hand attacking it and on the other rushing to its defence if the government appears threatened.

As relations between Vajpayee and the Sangh have continued to deteriorate, the prime minister has reportedly dug in his heels and is determined to call the rss' bluff. Sources say the prime minister has rebuffed rss joint general secretary Madan Das Devi's efforts to induct a Sangh nominee into the pmo. Vajpayee has also reportedly backtracked on his promise of reducing the powers of principal secretary Brajesh Mishra. Highly placed pmo sources say that reports of Mishra being relieved of his charge as national security advisor are inaccurate. Vajpayee has reportedly delayed appointing a chief of defence staff only in order to ensure that Mishra continues to hold both his posts.

Vajpayee has also made it clear to the parivar that it cannot dictate policy to him. Last week he asserted that "there is no going back on the economic reforms". He has also indicated that there is no question of replacing finance minister Yashwant Sinha—who reportedly wanted to quit after senior rss leader Dattopant Thengadi harshly criticised him.

Vajpayee knows that he will continue to be prime minister as long as he has the numbers in this Lok Sabha.And efforts are on to ensure the longevity of his government. Ajit Singh is likely to join the nda with two MPs and Ajit Panja is expected to break away from Mamata with as many as five MPs. Attempts are even on to break a small section of Mulayam Singh's SP.

But while Vajpayee may survive as prime minister, his failure to carry the Sangh with him will in the long run spell disaster for a cadre-based party like the bjp. Already, the party is living in dread of the UP assembly polls where it fears a drubbing. And if its core continues to remain disenchanted, post Vajpayee, the bjp could find itself a much diminished force. That is exactly what the rss fears. Therefore, the parivar is in an introspective mood.

The self-doubt was in evidence at a bjp/rss meeting at Jhinjholi, Haryana, last week. For some years now, Jhinjholi has been the favourite retreat of bjp and rss leaders. Whenever the top guns of the parivar want to get together, away from the prying eyes of the media, they head to Jhinjholi. Their destination there is the massive farmhouse complex—with dormitories, playing fields and even a swimming pool—run by the Surya Foundation, Surya tubes owner Jai Prakash's brainchild. He is also one of the biggest financiers of the rss. The Jhinjholi farm has hosted many rss training camps and meetings. And last week it hosted what is a unique parivar tradition, a chintan baithak (introspection session).

Whenever the bjp is in trouble, the parivar introspects. As the results of the assembly polls indicated big trouble, which Prime Minister Vajpayee described as a "wake-up call", the introspection began in dead earnest. After two days of deep thought at the farmhouse retreat, the top bjp leadership went into introspection mode for another two days over the weekend in the more salubrious climes of Mussoorie. Party president Jana Krishnamurthy sees these rounds of chintan baithaks as an exercise to bring basic discipline back into the organisation and evolve a better synergy between the bjp and the rss. Says he: "For a long time this type of meet was not held. I am reviving it."

The party has, after all, been jolted by the scale of the assembly poll debacle. President Krishnamurthy admits: "We didn't get what we expected. Certainly we are disappointed." What is really worrying the parivar, however, is that its own cadre is turning away from the party. After growing phenomenally in the 1990s, the bjp has not merely plateaued, it has actually fallen into decline. A state level organising secretary, who attended the Jhinjholi session, says: "We openly told the leaders that we are losing our voteshare, our own workers are disillusioned."

And when in trouble the bjp turns to its parent organisation. It was Advani who issued a call to the Sangh workers to involve themselves more fully with the bjp and "not distance themselves as they have done in recent times". A decision has also been taken to induct more rss pracharaks (wholetimers) into the bjp apparatus. As Advani put it at the closed-door meet: "Only rss workers have the commitment and dedication to come to the aid of the party at this time. Their high moral standards also sets an example."

Delivering the "boudhik" or intellectual sermon at the Jhinjholi chintan, Devi, who has been given a free hand in handling the bjp, also issued a stern warning to pracharaks. He warned against wholetimers developing political ambitions and reminded them that they were to work selflessly for the bjp's growth.But with Vajpayee at the helm, many pracharaks simply do not feel like giving their best.