Career politicians and big parties will deride them as amateurs. But these conscientious objectors won't sit out anymore. 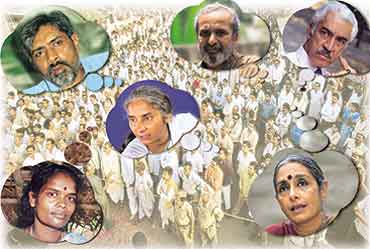 outlookindia.com
-0001-11-30T00:00:00+0553
Soundless in the din of sound bites and surrogate ads are a few good men making a quiet entry into the muddied mahakumbh of Indian politics. They may not influence the outcome of Election 2004, but they're sure to provide a contrast to the dark swirls our political waters are throwing up. Middle-class poster boys, radical activists, intellectuals...they're all set to shed their aversion to the electoral hurly-burly, and intervene directly to impart a serious edge to this periodic tamasha.

One such group of about 40 professors, writers and journalists calls itself the BJP Harao Manch or BHMFPATKA. Their objective being to BJP propaganda, they will provide statistical and intellectual inputs to secular parties. Academics like Madhu Prasad, Tanika Sarkar, Saswati Majumdar, Sumit Sarkar, among others, are on this forum. Not restricting themselves to just writing posters and banners, the BHM will also hold a rally in Old Delhi on April 9 to sensitise the electorate about the dangers of the BJP returning to power.

Working on the same lines is the Sanjhi Virasat Trust, a group of film-makers and intellectuals that was behind the Congress advertisements to counter the BJP's surrogate ad campaign. Sanjhi Virasat too has prominent figures like journalists Prabhash Joshi, Kuldip Nayar and Gandhian Nirmala Deshpande.

Literary icon U.R. Ananthamurthy is so disturbed by the complete "reversal of the idea of India" that he's willing to contest elections to defeat the BJP.The Kannada litterateur has written to Karnataka CM S.M. Krishna and JD(s) president H.D. Deve Gowda asking them to support his candidature against state BJP president Anantha Kumar. "I want to contest against Anantha Kumar in Bangalore. I had written to Krishna and Deve Gowda to support me in this fight. I am still waiting for their reply," he told Outlook.

Their failure to accommodate Ananthamurthy may only reflect the bankruptcy of mainstream parties, but he's undeterred. "The hegemony of the Sangh parivar's view of religion and culture has to be opposed because it's against the basic grain of our concept of a nation," he says. "Similarly, their concept of development also needs to be critiqued. That's why I've supported Medha and others critical of the anti-people development policies of this government. Every thinking person should oppose this politics that's in complete contrast to the multicultural, diverse idea of Indian nationhood."

Patkar's para-political entity, the PPF, invests in candidates rooting for people's development. "Joining the electoral process is an extension of our movement," she says. "The aim is to try and create pressure groups who help stem the senseless and anti-people mode of development successive governments have adopted."

But while Patkar's electoral involvement is an extension of her activism, psephologist Yogendra Yadav's association with the Samajwadi Jan Parishad (SJP) arises naturally from his being in the business of elections. This SJP is a registered party that's fielding candidates in Madhya Pradesh and Orissa.In MP, it is contesting two parliamentary seats—Hoshangabad and Betul. Its Hoshangabad candidate is JNU topper Sunil Gupta, who has spent almost 20 years of his life working among the tribals. In Betul, it's colleague Shamim Modi who has his hat in the ring.From Bargarh in Orissa, it has fielded Lingaraj Pradhan, another JNU-trained academic who has fought with the tribals against big mining corporations in Gandmardan for the last several years.

"Yogendra Yadav will be coming here for our campaign," says Pradhan. "We want to focus attention on lopsided development policies and parties that have exploited the less privileged for generations." Given their credo, Patkar's PPF will throw its weight behind Pradhan, Gupta, Modi, and tribal firebrand C.K. Janu in Kerala. Pradhan and Gupta have given up promising academic careers in the big cities to work for the poor. Film-maker Prakash Jha, by contrast, is more emotionally driven. Still angry about all that civil society has taken for granted—an exploitative social structure, a corrupt political framework—he's rolled up his shirt sleeves and decided to rough it out as an independent in Bihar to cleanse the 'corrupt system' single-handedly. A bit like the protagonist of Gangaajal, which recently made a splash with its all-avenging theme set in the badlands of Bihar.

It is part of my method of social intervention," says Jha. "I'd actually planned this since I made Damul 20 years back. I knew merely showing things on screen wouldn't be enough." Thus, social realism sets up a rendezvous with reality.

But no more real than those who were once part of the system and paid a heavy price for fighting its excesses. Satyendra Dubey lost his life, but left his voice weighing heavy on the nation's conscience. In UP, honest cop Shailendra Singh made headlines when he slapped POTA on gangster-turned-MLA Mukhtar Ansari and then resigned publicly in protest against "political interference".

On long leave since, Singh will now contest from Varanasi. He claims various parties, including the BJP, have approached him, but he has chosen to go it alone. "People like us should come forward and fight the corrupt and inefficient political class," says Singh. "If we don't try and make a difference, who will? The educated middle class has to take responsibility."

Arun Bhatia's another of his creed. This IAS officer too is tired of being at the receiving end of his corrupt masters' wrath. In his career of 35 years, Bhatia has stoked trouble for the political class wherever he's been posted and was transferred 26 times. Now, this silver-haired bureaucrat plans to contest from Pune. " demand the vote of honest persons," he implores. Considering the last time he was transferred as Pune municipal commissioner, people took to the streets and had him reinstated, his decision to contest as an independent should worry mainstream parties.

"I want to drive home the point that good people shouldn't stay away from politics; that ordinary people can contest and win elections; that honest men can defeat corrupt rule," he says. "Those who have abandoned politics need to return and take responsibility." Till then, India can only wait to cleanse its political soul.