Told in the mountaineering spirit, with secret Indo-US ties keeping tabs on the Chinese 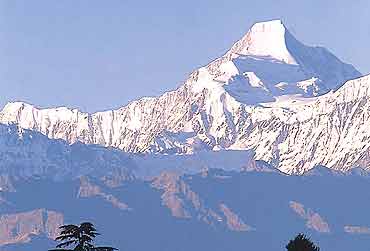 Spies In The Himalayas—Secret Missions And Perilous Climbs
By M.S. Kohli and Kenneth Conboy
Harper Collins Rs 395; Pages: 240
This book, written jointly by legendary mountaineer and former Indo-Tibetan Border Police officer M.S. Kohli and Kenneth Conboy, deputy director of the Heritage Foundation, Washington DC, provides an absorbing and authentic account of a top secret operation undertaken by the intelligence communities of India and the US after the Sino-Indian war of 1962.

The objective of the operation was to have a sensor with a nuclear-fuelled generator planted in the Himalayas by a team of Indo-US mountaineers to monitor nuclear and missile developments in China. While practically all the mountaineers selected from the Indian side came from the Intelligence Bureau and its allied agencies, those from the US were private climbers, with the CIA providing the leadership.

The first attempt to plant the device on Nanda Devi in 1965 was beaten back by bad weather. Instead of bringing the device back, the team, with the clearance of the IB and the Aviation Research Centre (ARC) HQ in New Delhi, left it cached on the mountain, planning to return the next year to retrieve it. When the team returned, it had disappeared—causing concern about possible radioactive contamination of the environment. Repeated searches couldn’t retrieve the device, but tests done at different spots indicated there was no cause for alarm.

The second attempt to plant a similar device on the Nanda Kot in 1967 was successful, but there were intermittent stoppages in its functioning due to snowfall. It was, therefore, retrieved the next year and returned to the US. The idea of using a device with a nuclear-fuelled generator was thereafter abandoned. Instead, a gas-powered device and a solar-powered one were planted in peaks in the Leh region and in the Northeast.

After the spy-in-the-sky satellites in the 1970s, which performed the same tasks more effectively and with much less risk of a political controversy, technical spies in the Himalayas lost their relevance. The sensitive joint project was kept a well-guarded secret till 1978, when Outside, an American journal, exposed it with a highly exaggerated and alarming account of the likely hazards to the environment from the lost nuclear-fuelled generator. After looking into the matter, then prime minister Morarji Desai assured Parliament that "such operations which carry potential national hazards would not be permitted by us".

The lucid account of this joint operation based on research into declassified documents in the US and interviews, confirms that while overtly non-aligned, India had been covertly collaborating with the US and the UK in monitoring China.

The 1962 war led to the birth of three Indian agencies for possible use in the event of another war with China—the Aviation Research Centre (ARC), the Special Frontier Force (SFF), also known as Establishment 22, and the Special Service Bureau (SSB). The book confirms what used to be only bruited about till now—the American paternity of the ARC and the sff and the British paternity of the ssb. The ARC, started as a clandestine wing for air drops to sff guerrillas in Tibetan territory in the event of another war, has since developed into an important technical intelligence agency.

Written mainly from the perspective of the mountaineers, this book is part adventure story, part professional account of how a sensitive task of common interest was carried out with admirable team spirit. Because of this restricted perspective, it doesn’t answer many questions. Was our Atomic Energy Commission consulted about the need for and wisdom of such a joint operation and the likely hazards? How come the IB did not do what the CIA did: associate a scientist with the operation? There is, of course, a reference to the association of the head of the ARC’s scientific division at a later stage, but there is no mention of anyone from our Atomic Energy Commission. Why did we not insist on our right to have the device examined by our nuclear scientists before planting it in our territory?

Gadgets received from foreign intelligence agencies are double-edged swords. In the late 1990s, the Australian media reported that their navy discarded a software received from the US after it was found that it was transferring to the supplier the files in the navy’s computers without the knowledge of the user. Depending on their location, such sensors could enable the CIA to monitor nuclear and missile developments not only in China, but also in India itself. One has reason to believe that this fear was always there at the back of the mind of many of our nuclear scientists, who had some inkling of the operation.

Two Totems And A Taboo