Those Givens And Takens

Nothing more than what we already know, not even a new angle to view Partition from 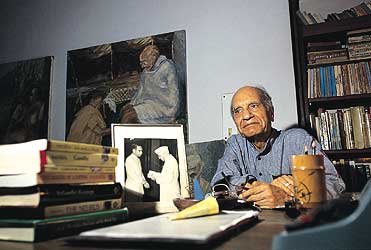 Witness To Partition: A Memoir
By B.R. Nanda
Rupa Rs 250; Pages: 172
BR. Nanda is a much-respected historian of modern India. He has written biographies of Gokhale, Gandhi, the Nehrus, Jamnalal Bajaj and much else. He was the founder-director of Nehru Memorial Library, chairman of the National Gandhi Museum and was awarded a well-deserved Padma Vibhushan earlier this year. Witness to Partition was written in a refugee camp in Ferozepur where Nanda was living after he was forced to leave Pakistan, and was first published in 1948. He was witness to the horrendous killings on either side of the hastily-drawn frontier and the miserable plight of millions of refugees who lost their families and fortunes as they fled their killers.

However, though an eyewitness, Nanda has hardly anything to say about what he saw: most of his memoir recounts what led Indian Muslims to demand a separate state, how close our leaders came to avoid Partition, the British perfidy in taking the policy of divide and rule to its logical conclusion and the aftermath.

Nanda repeats the much-touted theory that the Indian Muslim desire for a separate state was nurtured by the British. True, they introduced separate electorates in democratic institutions and thus encouraged separatism. But the feeling that they were a people apart from the non-Muslims existed long before the British began exploiting it. Maulana Mohammed Ali hit the nail on the head when he said the British do not divide us to rule, we divide ourselves and they rule.

Non-Muslim Indians do not realise how much they contributed to the Muslim feeling of being unacceptable. Till 1947, there was very little mingling between the two on equal terms. Muslims were looked down upon as cow-eating mlecchas. Even when invited to Hindu homes, separate utensils, plates, cups, saucers and spoons were provided for Muslim guests and never used for others. Muslims were fully aware of it. Hindus and Sikhs were rarely invited to Muslim homes. The communities lived in passable harmony but hardly ever mixed as they did with people of their own faith.

Nanda goes over the much-trodden path taken by non-Muslim historians. For the latter, Syed Ahmed Khan chalked out the road to separatism when he founded the Aligarh Muslim University and persuaded educated Muslims to keep away from the Hindu-dominated National Congress. Allama Iqbal justified it and the crackpot Chaudhary Rehmat Ali, then a Cambridge student, drew the map of Muslim India and coined the word Pakistan. Many years later, the Muslim League under M.A. Jinnah revived the notion and got away with it. This is only one half of the Partition story. The Pakistan version is the other half on which Nanda has nothing to say.

The Pakistani version of the background to Partition has as much to it as the Indian one. According to it, Hindus never accepted Muslim presence in India from the time Muslim armies invaded and colonised large parts of the country. They did not have the strength to fight back, accepted humiliating subservience like paying the jazia, giving their daughters to the harems of sultans, watching helplessly as their places of worship were razed to the ground and large sections of the lower castes embraced Islam.

Hindu resentment surfaced during British rule. The Congress-led Indian freedom movement was essentially a reassertion of its Hindu identity which reluctantly conceded the Muslims a secondary status. Partition was not a brainchild of Syed Ahmed, Iqbal, Rehmat Ali or Jinnah, Veer Savarkar and Lala Lajpat Rai too had envisaged a division of the country on communal lines. Seeing how things have turned out, there is substance in the Muslims’ separatist point of view. The way Hindus look upon the Babri Masjid-Ramjanmabhoomi dispute and the repeated efforts to impose a blanket ban on cow slaughter lends credence to their argument.

Nanda also subscribes to the notion that Indian Muslims feel that since the British had taken over India from them, it should have been returned to them. As a matter of historical fact, the British did not take over India from Muslim rulers. When they took possession of Delhi in 1803, they reduced the Mughal emperor to a pensioner. Punjab and the northwestern frontier was under Sikh domination; j&k under the Dogras, most of Deccan under Maratha rule, Rajasthan under the Rajputs, and Delhi’s environs controlled by the Jats. The delusion that the British grabbed the Mughal empire is limited to the United Provinces and the Awadh nawabs. They were the main supporters of the demand for Pakistan. And they, more than other Muslims, paid a heavy price for deluding themselves. Nanda’s dissertation is disappointing.