In the south, more than reel, films morph into rituals of the culture 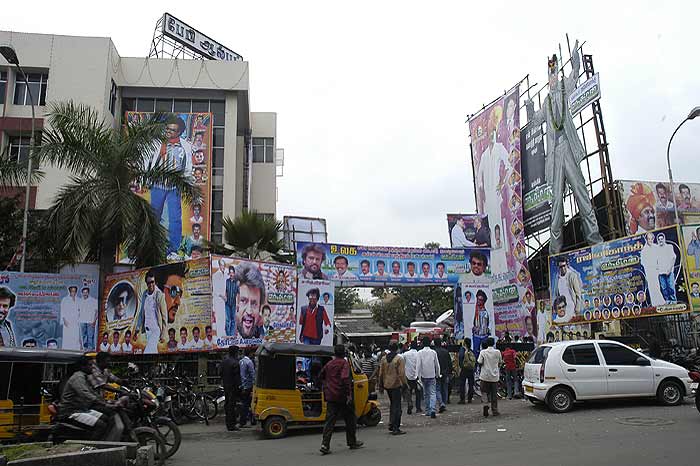 In philosophy, there is an interesting problem: does the Equator really exist? Or is it just an imaginary line? Another extension to this question is: are directions real? Is there really something unique to north, south, east and west? Or are they merely conventions? If they are just conventions, then nothing would be lost if we all agree to reverse these terms—that is, call north as south and east as west? Right?

Wrong. The solution to this philosophical problem lies—as it often does—in popular cinema. Try reversing south to north in south India and what you have is not just a wrong answer but a potential revolution. For the southies, there is indeed a clear line of demarcation between them and their fellow citizens living ‘above’ them.

People go to watch movies in theatres. I go to watch films on the streets. When I walk in Tiruchi, I can see Vijay in a red T-shirt, Surya with his bulging biceps, Kamal with a crooked smile matching his haircut, Rajni hiding behind his super-cool glasses, and even MGR and Sivaji sitting on a chair outside tea stalls listening to their own old songs. In Guntur, I watch Chiranjeevi outside the barber shop sharing a joke with Mahesh Babu, and an older NTR walking along the lake in Hyderabad with his wife in tow.

And yes, I am aware that there are no actresses on the streets. I do not see a Sridevi sipping tea with Kamal or sharing an oily, sinful vada with Rajni. I cannot see Urvashi decked in jasmine flowers entering a temple or Smitha shimmering in silk with two kids behind. I do not see them because they are not there. The actresses are to be found, if at all, within homes, tucked away inside/between daily womanly chores. The question of women in films, I need not remind you, is a difficult one that will not easily go away, and so we can keep them inside the houses for now.

No, I do not see ghosts nor am I given to fanciful imagination, even though that is one professional hazard of being a philosopher. It is merely the case that here film inhabits the outside world to a greater extent than the world of sweaty theatres.

There are no actresses on the streets...I don’t see a Sridevi sharing a sinful, oily vada with Rajni.

This leads us to a piquant situation. Within films, actors are merely characters, playing one role or the other. It is only outside, on the streets, in the tea stalls and hotels, around bus stands, temples and marriage choultries, that these actors come to life. Sometimes more, as when they become temple deities. Actors in these films do not create a world of the hyper-real on the screen; instead, they do it on the streets. The mega cutouts, the garish costumes, the loads of flower garlands, blood-red kumkum streaking all over the pictures—this is where the actors become real human beings.

In Kerala, though, it is different (can it be otherwise?). More than actors on the streets, you see writers and directors in dim bars. Brooding figures suddenly get animated and then you hear talk of Tarkovsky, Kurosawa, Truffaut and many unpronounceable others. The fantasy of the real Malayali is to be a director, not an actor. More stories have been written, more directors and actors made in these bars that it has become a cliche to think of alcohol when you talk of Malayalam films. And yes, here too, more so than in other places, there are no women. In these moments of deep alcoholic communion, in the macho corners on the streets, we only talk of male directors...but always look to see which one of the women on the streets would be a potential actress.

And now, not to forget Karnataka—my homeland, so I have to be a little bit kind. If I want to see a movie here, I do not go to the theatres. Nor do I go to the streets. Where are the movies to be found? Where is the residue of the cinematic fantasy to be discovered? The hyper-real presence of actors, as in Tamil Nadu and Andhra, is not found in Karnataka. There are apologetic fan clubs, of course, but the public presence of filmstars is almost a private joke, with one or two notable exceptions. Perhaps Kannada film replaces the obsession with power, money and politics with aesthetics? Yes, perhaps the day this will happen is when pigs fly or better still, when there’s a majority of Kannada speakers in Bangalore.

What really is special to south Indian cinema? These films are a lot like the four dominant states of the south. Look at the way the languages are linked: Tamil and Malayalam have a lot in common and if you know the Tamil script you can soon decipher the Malayalam writing. Similarly, the scripts for Telugu and Kannada are quite similar. Ironically, for a nation where differences in language are the basis for creation of the states, it is also the similarity of these four dominant languages that unify these into one south.

To indulge in some facile stereotypes (after all, we are talking about cinema here), the four states embody four different characteristics. One is fiery and loud, another is hyperactive and melodramatic, the third is polite and (dare I say this?) boring, and the fourth is reticent and morose. The good thing about stereotypes is that while we know these characterisations are not really true, nevertheless most of us know which states refer to what characteristic!

What came first, these cultural stereotypes or the films which embody many of these characteristics?

And here comes the expected chicken-egg question. What came first? These cultural stereotypes or the films which seem to embody many of these characteristics? To understand this, we have to really understand the great revolution engendered by south Indian films about the very nature of film itself. One would think that films are primarily a visual medium, yet the very essence of the visual is erased in these films. The aesthetics of the visual becomes secondary to various other elements. This has an important consequence: films live in the everydayness of our culture and are replayed not just in our visual memory but in our ordinary life experiences, at school functions, marriage halls and even funeral processions. Films become part of the rituals of our culture only because they can negate this excessive obeisance to the visual that is so important to other film traditions. That is why many popular films can be crass, undisciplined, unskilled and yet catalyse deep emotion. It is through this emotion that the idea of the south is concretised.

Perhaps there is a lesson here: a heavy dose of cinematic emotion can make the Equator real.