A unique Ramlila, organised and acted out by Muslims, won’t be held this year 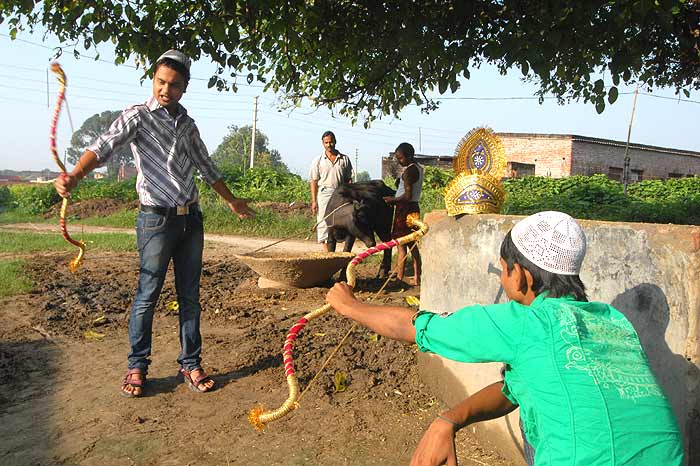 Sarvar and Salman Raza, students of commerce at Lucknow’s Shia PG College, have significantly disparate aims. Sarvar wants to join the army; Salman dreams of becoming a film star, although he hastens to clarify that his idol isn’t his Bollywood namesake but Ranbir Kapoor. For now, however, what’s working up the two brothers is not the rosy future they dream of but the disquieting present: a unique 39-year-old Ramlila in Lucknow in which Sarvar and Salman have played Ram and Lakshman for four years may not take place this year. “It’s heartbreaking to think a slice of our history may end,” says Sarvar. And Salman, “It hurts to know we might lose a vital part of us.”

What they are talking about is the Baxi Ka Talaab Ki Ramlila, also known as the BKT Ramlila, unique for the leading role played by the Muslim community in organising, staging and enacting it. It takes its name from its historic venue on the outskirts of Lucknow, and is organised for three days during a Dussehra mela. Unlike other Ramlilas, it starts with a Shiv Ki Baraat on Dussehra, when other Ramlilas conclude. Muslims are on the organising committee. The main roles—Ram, Lakshman, Sita etc—are played by young Muslim men, all amateurs. Mohammed Shabbir Khan has been the director for 25 years, doubling up for the role of Dashrath too. Ravan has been played for over 20 years by Mohammed Naseem Khan. Indeed, there are other pan-religion Ramlilas (see box), but this one is unique in that its initiators and major drivers are Muslim, even as Hindus too take on roles in it. Hakim Raza Shadaab, an organiser, remembers a year when Ramzan coincided with Dussehra. The Ravan vadh episode was stopped midway, the mike was switched off and the fasting Muslim actors performed iftaar on stage as the audience waited. “They kept their costumes on, but put on skullcaps instead of mukuts during iftaar,” says Ashid Ali, an organiser. After this, the Ramlila continued!

Unfortunately this year, inflation and insidious local politics have sprung up like Ravan’s heads and seem set to bring the curtains down on this unsung celebration of harmony and unity. We meet the core organising team 10 days before Dussehra at Baxi Ka Talaab. The area is teeming with grazing cattle. Mosquitoes buzz in stagnant pools. There’s a stage being erected, but it’s for a Mata ka Jagrata, nightlong prayers for Durga, not for the Ramlila. We encounter despondent faces, bereft of excitement, lost in uneasy resignation. “We used to start months in advance, booking bands, elephants and camels for the procession,” says Shadaab. “It’s too late now.”

So what has gone wrong? The Ramlila faced its first big blow last year when the Hindu-dominated Rudahi and Muslim-dominated Bargadi villages (where the Ramlila originated) along with 12 others were merged with the new BKT town area. With gram panchayats being replaced by a nagar panchayat, the independence to organise the Ramlila locally has gone. Administrative whims have also played a role: last year, the BSP-ruled state government decided to stage its own Ramlila, inviting professionals from Mathura. The local version paled in comparison. “The sanctity of the original was lost,” says Videsh Pal Yadav, who chaired the BKT Ramlila committee from 1991 to 2010. Nirmal Chander, who has made a documentary on the BKT tradition, called Sab Lila Hai, says, “That Ramlila was by outsiders; it was like taking something away from local artistes.” This year, too, the government is organising a huge five-day Ramlila here.

Nakul Dubey, the local MLA and minister for urban development, did promise to support the BKT Ramlila when he attended it last year, but the organising committee isn’t impressed. “Last year, they didn’t provide water, not even home guards,” says Ashid Ali. Expenses were met with donations from shopkeepers of the local weekly market, but Yadav says, “The market now patronises the bigger, sarkari Ramlila.” The organisers have given up, not sure about raising the Rs 5 lakh needed to conduct the Ramlila. “We only want to continue with this honourable tradition, but they think we are rebelling against the administration and the new Ramlila committee,” says Yadav.

The foundation for the BKT Ramlila was laid by Dr Muzaffar Hussain and the then gram pradhan of Rudahi, Maikulal Yadav. No professional actors were hired and that tradition still continues, with untrained young Muslim men playing the key roles. “It’s been a way of nurturing local talent,” says Shadaab. The Ramlila has always attracted huge crowds—over 50,000 people come to watch from nearby towns and villages and have made it an abiding symbol of Hindu-Muslim unity. “It’s an example of harmony and secularism,” says Mohas Das of Mohan Kala Kendra, the town’s oldest and largest costume supplier. “Such practices are more effective in fostering peace than political speeches. It will be shameful for Lucknow to lose such a tradition.”

The organisers are now nursing fond memories of what they had come to love. “The Muslims felt lucky and privileged to participate in the programme,” says Noor Ahmad, who has been involved with the Ramlila from the start. Says Ainul Hussain, a local resident, “Both communities accepted the Ramlila with heart and soul.” Chander speaks of what the tradition had come to signify: “This place is just 120 km from Ayodhya, but the Babri Masjid demolition didn’t affect the Ramlila here.” He hopes the disruption is temporary, and like other organisers, hopes that media reports will bring support and change the fortunes of the BKT Ramlila. “We hope,” say Sarvar and Salman, almost in unison, “this halt is just a comma and not a full stop.”

The Uneasy Air Over Waziristan