Ok, you look young with your hair. But should you, after all? Ask Rajni 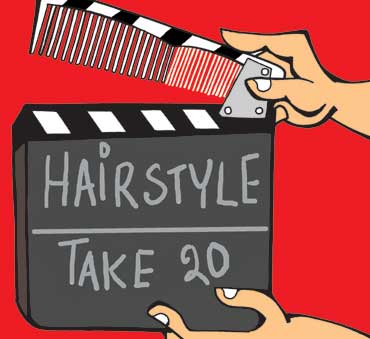 outlookindia.com
-0001-11-30T00:00:00+0553
Himesh Reshammiyya once was just a guy with a cap and a talent to sing through a mike stuffed into his nose. The cap was to keep the lid on a boiling truth: a bald head. No longer. Dark streams of silken tresses fall around his head and over his shoulder in an enviable accomplishment of metrosexual effeminacy. Which mare now grazes forlorn, the swish quite gone from her once bushy tail, in some far-off grassland under a pale moon, mutilated and unacknowledged for the hairy fortunes that she gifted to an ageing star whose crown only the other day was naked like a stone and just as smooth?

Himesh is not the only one to spring new hair at you without warning. Amitabh Bachchan, who once long ago had a splendid head of hair, was one of the first to see the dread patches of no man's land developing on his scalp like a drought-stricken land and promptly paid to get someone else's hair. Or is it just nylon? Or fibre? Possible, possible. We'll know for sure only if we set the mop on fire and then wait for the smell. There have been other hair-seekers. Sunny Deol, Salman Khan, Aditya Pancholi, Govinda, Jackie Shroff, Rajesh Khanna, to name just a few.

All these stars were one day bald—just like you and me. The very next, they had hair. And so much of it. So much, in fact, that some of them often wear it over their eyes. Just showing off, of course. But, hey, where is it all coming from? Could it be that they are wearing yours? Maybe every time you go to your barber, you tell him, casually, "Here, mate, cut my locks and send them across to Salman Khan, will you?" A grand gesture, which you generously chose to forget even before the next snip. Or are these astounding hirsute gains of the stars at the expense of some terrified freshly-shorn furry animal? Say, a bear, which ominously enough rhymes with hair? Why, according to one animal behaviour report, even porcupines are a subdued lot these days what with punk hair styles a rage in nightclubs and discotheques.

What is with hair? I mean it's good to have, especially if you like to use a comb once in a while. But surely, it's not vital like, say, the nose or the eye? It's in Bollywood that hair is at a premium. Down South, for example, Rajnikanth wears a wig before a camera. Off it though, he is bald as a ball and not one of his million fans has a problem with it. Actually, it makes the superstar human.

But in Bollywood, it is pretty tough going if your genes play up—and they most certainly will—and you wake up one day bald and there is a whole romantic sequence to be shot with one of the impossibly young and impossibly beautiful heroines in a crowded boulevard in Paris with a hundred natives gawking at the proceedings as if the aliens have after all arrived. As a matter of fact, of course they have. There is extraterrestrial life and all of it comes from Bollywood, wearing lot of hair belonging to some one else.

The thing with hair is youth. Vigour. Hair is even a perspective by itself, framing the face, smoothing the hard lines and rounding the hollows around the forehead and the temples. Who doesn't want to look good? Especially since these are days of the Appearance.

In an Industrial Age of Appearance, the cult of Youth and Beauty are at a premium, not just because there is money in it, but also because it empowers you to be the personality you want to become. It is a flight from being the dreary little you. The age-worn ugly you is the reality. The beautiful you flashing false teeth and wearing your neighbour's hair is the illusion. Indeed, why not borrow some hair and help along the world?

The trouble is you'd be looking for a face to wear next. Or kill someone to get a beating heart. What would it matter so long as you looked good enough to be someone else? Anything so one can escape from oneself. Which of course is the essence of entertainment, and of stardom.

C.P. Surendran is a novelist and poet. His latest collection of poems is Portraits of The Space We Occupy. He is also a journalist and columnist.