The great Qurratulain Hyder could be wonderfully gossipy yet notoriously tetchy. Jameel Akhtar brings out the real person, her world and her creations. 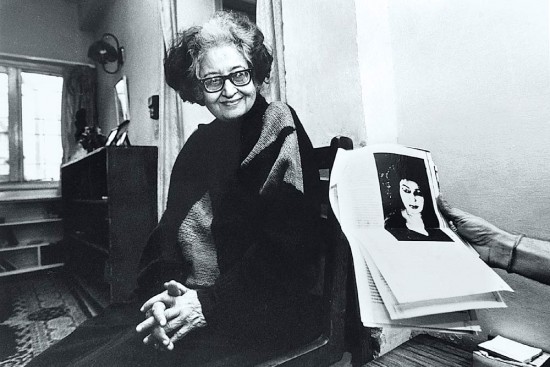 She was a bit of a mystery wrapped in an enigma. With her flaming orange mop of hair and fire-engine red lips, she was reticent, almost monosyllabic in pub­­lic, preferring her pen to speak volumes, while maintaining a prickly silence, broken by a few short but sharp utterances when called upon to speak. One of the finest prose stylists of modern times, the aut­­­­hor of dozens of books, almost all runaway best-sellers, bilingual and cos­­mopo­litan to an extent few writers in Urdu have been, she was also an int­­er­­viewer’s nightmare. Giggly, gir­lish and gossipy one minute, taciturn and evasive the next, charming and insightful one minute, imperious and opaque the next; she could leave you with a sand-slipping-through-your-­fingers feeling. This was Qurratulain Hyder, the Jnanpith-award winning writer and grande dame of Urdu literature, admired by many, including this rev­iewer, and feared in equal mea­­sure for her easily-­frayed pat­i­ence.

And so, the intrepid Jameel Akhtar is to be congratulated for gleaning a mar­­­athon interview out of her and for having a free-wheeling conversation spread over several sittings on a wide range of subjects: books, music, painting, journalism, literary critics...culture in the broadest sense. Ably tra­­nslated from the Urdu by Durdana Soomro, this book is a valuable tool to understanding Hyder and her craft, especially now that she has entered the syllabi and is being taught not merely in departments of gender stu­­dies but as part of the curricula on modern Indian writings. Quite literally, this book goes where no man has gone before! It takes us deep into the heart and mind of a fam­ously temperamental, one might even say idiosyncratic, writer; taken tog­ether, as the sum of its parts, A Singular Voice gives us many valuable INS­ights into her craft as a writer and pro­­vides much-needed biographical details to fill the gaps in our understanding of Hyder.