This rehab home is a double blessing—it's for disabled orphans 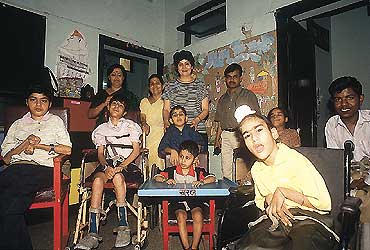 outlookindia.com
-0001-11-30T00:00:00+0553
Kailash Colony, with its fancy bungalows and plush surroundings, is the epitome of South Delhi’s screeching glitz and glamour. But hidden in this luxuriant concrete jungle is a dilapidated house, which, if it had been easily visible, would have stuck out like a sore thumb. But it doesn’t because it’s only chance or careful purveying that can reveal this structure with its almost decaying facade and a few unkempt rooms.

Inside it are scores of children accompanied by three women. It’s a rehabilitation home for children with multiple disabilities requiring round-the-clock attention and care. One of the many that dot our urban landscape nowadays. There is, however, something that starkly distinguishes the Handicapped Children’s Parents Association (hcpa) from other similar institutions: the sad story of its origin.

K. Kumar, one of its founding members, says she was sensitised towards children with multiple disabilities after a particularly gruesome incident 13 years ago. One Satwant Kaur—who had been divorced by her husband because both their children were physically and mentally challenged—was murdered by a maid she had hired to take care of the kids. The two bed-ridden children watched helplessly as their mother bled to death since help didn’t arrive for almost 36 hours. Says Kumar: "It was a horrifying tale. Only then did we realise the importance of taking care of such children, especially after the death of their parents." Thus was born the hcpa. She adds: "Our home is for those physically and mentally challenged children who have lost their parents." Kumar should know. Both her children are severely handicapped and require 24-hour attention. "It’s all fine now. But what happens after our death?"

It is indeed a serious crisis. For, statistics put the total number of such (orphaned) disabled at more than 11 million across the country. Delhi alone has almost 4 million of them. Independent agencies have flooded government offices with countless cases where such children have been killed by relatives and neighbours for property. But now, thanks to the hcpa home and its troika of Kumar, Shubra Mukherjee and Kavita Uberoi, a beginning towards dealing with this crisis seems to have been made.

Mukherjee, responsible for running hcpa’s day-boarding school Udaan (which currently has 30-odd children), says: "We’re managing and training the children to make them sufficiently self-reliant for the future." The new home that is being planned will, according to her, have boarding facilities for a minimum of 96 physically and mentally challenged children, and recreational, educational, rehabilitation and physiotherapy activities on a daily basis for an additional 200.

Mansoor Alam, one of the senior-most physiotherapists at hcpa, says the organisation has also enrolled a large number of slum children to help the institution engage its inmates in various day-long activities. But why from the slums? Says Alam: "They get to study here and we offer them books, clothes and food. Besides, their level of dedication is fairly high."

Besides all this, hcpa is currently on a nationwide mission to update its list of such orphans who need to be accommodated on a first-come-first-served basis. And in cases where the parents are still alive, hcpa is asking them to enrol their children so that rooms can be allotted when the need arises. "And mind you, there is no financial commitment we are asking the parents to make. There is no condition being laid. The response is fabulous, primarily because the concern for their disabled children is uppermost in the minds of the parents," adds Uberoi, who as a student in Mumbai helped blind students appear for examinations and is now associated with hcpa’s efforts to locate such handicapped children and help raise funds for the home, construction for which has started on a 1.25-acre plot close to the Capital’s international airport. Says Uberoi: "It will be difficult to accommodate all the applicants. But hopefully, some benefactor will come forward so that we can construct more rooms and help many more such children." A tall order perhaps, but definitely worth the cause. If you are interested in transforming this noble dream into a reality, send in your donations (both cash and kind) to Handicapped Children’s Parents Association (hcpa), 2, Balbir Saxena Marg, Hauz Khas, New Delhi. Telephone: 011-6528542/6852875. Udaan for the Disabled A-59, Kailash Colony, New Delhi.