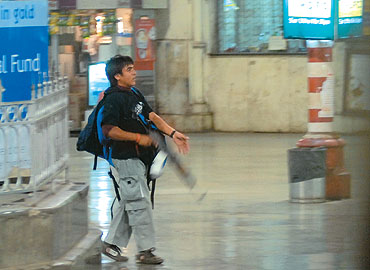 "If Kasab is treated as a PoW he can't be tried —for war hasn't been declared between India and Pakistan."

"Under existing laws we cannot detain a person for more than 3 months. So we must treat Kasab as a PoW."

"Advocates shouldn't subvert justice. If he isn't provided a lawyer, the legitimacy of the trial will be put to test."

"A lawyer can refuse to defend a person. Our association has unanimously decided on that option."

Three weeks after the 26/11 attacks on Mumbai, Ajmal Kasab, the only suspect in police custody, is still without legal assistance. Four lawyers who came forward to represent him have been subjected to threats and acts of vandalism by Shiv Sainiks. Last week, the Bombay Metropolitan Magistrate's Court Bar Association adopted a resolution that none of its members would defend or represent any offender involved in the attacks.

Association president Rohini Wagh defends the decision: "I don't understand why lawyers are falling head over heels to represent Kasab. There are thousands of people languishing in our jails. Why don't they represent them? It is not even clear whether he is incapable of defending himself. Even if this was...