The '90s rancour is past. Cricket, the victim before, is now the tone-setter. 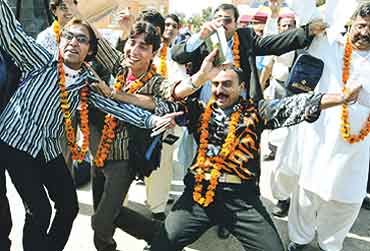 outlookindia.com
-0001-11-30T00:00:00+0553
Which side are you supporting?" the spectator behind me asked. The setting was the Punjab Cricket Association's lovely ground at Mohali. It was the first session of the first day of the first Test. India was playing Pakistan and Irfan Pathan was bowling to Salman Butt. "I'm a committed neutral," I answered. It was one of those rare occasions when the diplomatic reply also happened to be a truthful one.

As a cricket lover and a frequent visitor to South Asia, I'm deeply heartened by the resumption of cricket competition between the two countries, and even more by the ambience in which the cricket is being played and watched. At Mohali, as in Pakistan a year ago, the sporting spectacle has been garnished by myriad gestures of Indo-Pak amity.

Watching the banners incorporating the symbols of the two nations and emblazoned with doves of peace and hands clasped in friendship, I couldn't help but note the contrast with the last Indo-Pak match I'd attended: the 1996 World Cup quarter-final in Bangalore. India won that match but it was a depressing occasion for anyone concerned about the future of South Asia. The crowd whipped itself into a frenzy of animosity. Bellicose chants of "Pakistan, hai! hai!" rang out incessantly. The dominant emotion was vindictive. The fans seemed keener to celebrate a Pakistani humiliation than a strong Indian performance.

At Mohali, the change in atmosphere was palpable. And it cannot be credited to either politicians or the media—they have merely followed the lead from below, from the bases of both societies, where the desire for South Asian peace has overcome decades of fearful mythologies.

The people of South Asia have paid a terrible price for decades of Indo-Pak hostility. Not only in the wars that have taken so many human lives, but in the colossal economic waste and the equally colossal distraction from pressing domestic problems. In that context, the constant disruption of Indo-Pak cricket may seem of little import, but as a disturbing reminder of the abnormality of relations between the neighbouring countries, it has had a sharp political significance. After all, as long as India and Pakistan could not even play cricket together, what chance was there of resolving thornier issues?

As anyone who has travelled on both sides of the border knows, India and Pakistan share many features, not least a common cricket culture. What makes subcontinental cricket special for an outsider is the eminence the game enjoys in popular consciousness. Wherever I go in South Asia, I know that a knowledge of cricket will enable me to converse with people from an astonishing variety of backgrounds.

For the cricket lover reared in the sedate atmosphere of English grounds, cricket in South Asia is a refreshingly voluble and colourful experience. The beating of drums, the shriek of whistles, the chanting, the waving of flags and home-made placards—all of which are banned at English grounds—may make it hard for the umpire to detect the snick behind the wicket, but it breathes life and soul into a game that in its native land is still too often weighed down by antique protocols.

Now that Indo-Pak cricket has assumed its rightful place in the annual round of major sporting encounters, one hopes that the game in South Asia will be able to flourish as never before, untainted by bigotry and xenophobia. Perhaps it will at last address its own long-standing problems, including grassroots development (this people's pastime remains effectively inaccessible to a majority) and, above all, transparency and accountability in the governance of the game.

I also fear for the future of South Asian cricket as it gets swallowed up in the ever-burgeoning television-centric celebrity culture. With due respect for Harsha Bhogle, I worry about a society in which so many skilled individuals seem to think being a cricket commentator is the acme of personal glory.

But in its deformations as well as its delights, South Asian cricket remains a reliable barometer of the society in which it is played. In the Indo-Pak series, it has provided a vehicle for the expression of a hunger for South Asian harmony that has been gestating for years. Cricket itself, of course, cannot forge an enduring peace. It can help foster goodwill, and it can put pressure on politicians on both sides of the border, but in the end goodwill will have to be accompanied by concrete political initiatives, of which the Srinagar-Muzaffarabad bus route is so far the best example, though it is only a start.

The irony is that the normalisation of Indo-Pak cricket will strip the rivalry of some of its intensity, and therefore make it less of a special occasion. Gradually it will become less imbued with national and communal connotations. While that may make it less of a money-spinner for corporate and media interests, it will make it more enjoyable for those for whom cricket is first and foremost an exquisitely delightful exercise in the manipulation of bat and ball, not a substitute for warfare.

Similarly, India-Pakistan peace, if it is firmly established, will deprive a number of people on both sides of the border of a long-running excuse for their own failures and culpabilities. It will enable South Asians not only to indulge their shared love of cricket, but also, at last, to address their shared social and economic challenges.

(Mike Marqusee is the author of War Minus the Shooting, a book on the '96 cricket World Cup in South Asia, Anyone But England, a study of English cricket, and the forthcoming Wicked Messenger on Bob Dylan.)

'This Is Our Watan, Our Home'