"This Government Will Last Its Full Term" 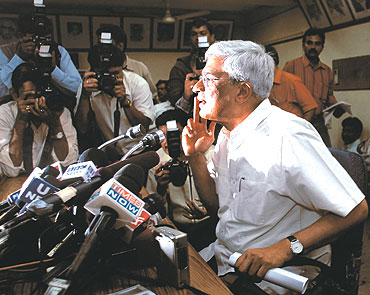 outlookindia.com
-0001-11-30T00:00:00+0553
CPI(M) general secretary Prakash Karat will complete three years in office next month. Ahead of the party's Coimbatore meet, he spoke to Outlook about the CPI(M)'s working relationship with the UPA government and the Indo-US nuclear deal. Excerpts:

Compared with the confrontationist line the Left has adopted with the UPA, it enjoyed a harmonious equation with the Deve Gowda-led United Front government. Some people say it was because your predecessor, H.K.S. Surjeet, was more flexible....

The UF was our creation, a non-Congress formation. We were allies and partners, it was a government of people whom we had selected. With the Congress-UPA, it is only an understanding, based on a policy framework enunciated in the NCMP, not a political or electoral pact. In the UF case, it was our initiative, so it was more harmonious. The UF government was unstable because it was supported by the Congress. The Left, on the other hand, gives support on the basis of a policy framework. This government is stable because we're supporting it. It will last its full term. If it falls, it won't be because of us.

People call you a hardliner...

The Left won 61 Lok Sabha seats in 2004. That decided our role. A secular government at the Centre, dependent on the Left, gave us an opportunity to project our policies. Anyone else in the CPI(M) leadership would have utilised the situation to put forward the Left's policies strongly. We are translating our (electoral) gains to go forward.

First you said if the UPA went to the IAEA, the Left would withdraw support immediately. Later, you agreed to let the government hold talks with the IAEA. Was it flexibility or a desire to avert an early election?

You recently shared a platform with the UNPA....

The UF was a post-electoral combination: a government was formed, and then a common programme adopted. After our UF experience and earlier efforts to form a Third Front, we decided we would first draw up a programme, create a secular platform, and gather forces inside and outside the UNPA. In that process, a third alternative will emerge. In 2006, we decided to work with parties not with the NDA on issues of common interest. We accepted the UNPA invitation to join its campaign on farmers, but we are not in the UNPA. Currently, we are focusing on joint action on common issues.

Will you join hands with the UNPA for the general elections?

I can't say anything before the elections. We want to create an alternative. There is no time-frame; our efforts are not linked to any election.

You disagree with the liberal economic policies of the Congress. How is the TDP, which is part of the UNPA, any different?

The TDP has set up a committee to review its earlier economic policies.

But Does It Catch Mice?