Thinning Of The Ballast 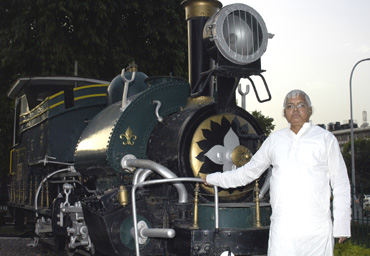 Bankruptcy To Billions: How The Indian Railways Transformed
By Sudhir Kumar By Shagun Mehrotra
Oxford University Press Pages: 228; Rs. 495
First, I have a point to pick with the title. By no stretch of the imagination has the Indian Railways ever been bankrupt. In fact, it has been acknowledged as one of the few profit-making railway systems in the world. And it has been paying a dividend on the capital invested by the Centre regularly since 1950. You may as well call the government of India bankrupt because it owns the railways.

Much has been written about how the present rail minister, Laloo Prasad Yadav, has transformed the railways by his out-of-the-box thinking. Simply put, this means the railways has increased its profits severalfold by introducing longer, heavier trains to carry more passengers and freight. But this is hardly Yadav’s idea, as this book by Sudhir Kumar and Shagun Mehrotra makes it out to be. Incidentally, Sudhir Kumar, the ias officer who is Yadav’s chosen one—officer on special duty to the minister of railways—is considered to be the brains behind the so-called transformation.

The much-touted extra carrying capacity that the authors flog as Yadav’s vision has been a continuous process in the railways. In the late ’80s, the then railways minister Madhavrao Scindia mounted a major technological mission to modernise the rail system for carrying bigger loads. Laloo Yadav is what we call in Hindi a ‘kismat ka dhani’,—fortune’s favourite. With the economy booming and petrol prices rising, it is only logical that rail traffic became an alternative to road transport. But the railways has been working for at least two decades now on its strategy: make trains longer, pack more weight into carriages. Luckily for Yadav, his predecessor, Nitish Kumar, managed to get Rs 17,000 crore for the railways as a safety fund. This went into the much-needed track renewals, enabling trains to carry heavier loads. Yadav’s sole contribution to this turnaround lies in his hands-off approach to the day-to-day management.

The extra carry capacity gave the railways a boost in its earnings, especially as traffic was growing at a fast rate. But the innovation did not stop there. They began to charge far beyond the maximum carrying capacity, even though some items like fertilisers and even coal couldn’t be loaded beyond a point. There were protests, but they had no choice—the railways are a monopoly, after all. Ironically, while the authors talk about shedding the monopolistic mindset, they are silent on how customers are charged extra tariff on the same loads as before.

Take iron ore, for example, where the earnings of the railways has gone up from Rs 900 crore in 2004 to Rs 4,400 crore in 2008 and an estimated Rs 9,000 crore in 2009. How did this happen? Partly by changing the classification of tariff rates but also by imposing extra charges such as terminal and congestion surcharge and busy season surcharge.

Passenger traffic may be the main talking point of every rail budget but, financially speaking, it matters very little. It has more to do with political fallout. Don’t forget that the railways have less than 15 per cent of the passenger market share. Over 80 per cent of that market belongs to the hundreds and thousands of buses connecting small towns, villages, metros, with none of the politics of an additional service or a station.

The authors resort to the same method of half-truths when it comes to staff costs. For the financial transformation, the railways did not resort to downsizing, claim the authors. It’s true there were no retrenchments, but like the turnaround, the downsizing too started in the late ’80s by reducing hiring and retraining staff, bringing down the staff strength by 2.46 lakh by 2007. While Laloo got lucky that he didn’t feel the impact of the fifth pay commission—the first two years after the report is accepted are the hardest—working expenses are already going up because of the sixth pay commission, raising the operating ratio for this year and the next.

There is nothing wrong in earning higher profits and increasing the return on the investments made by seizing opportunities, by strategic marketing and fixing tariffs. But one needs to be transparent and say how the turnaround was achieved. Not by a magic wand, as Laloo often makes it out to be, a trap into which this analytical book ultimately falls.

(Mahesh Kapoor is a former executive director of the Railway Board)