If Soniaji can woo Vajpayee, think of how she can impress the voters! Onward Italy, O brave parivar pracharaks... 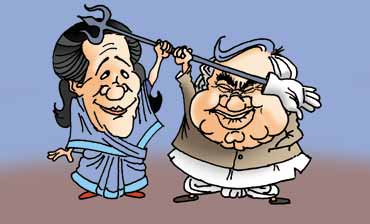 outlookindia.com
-0001-11-30T00:00:00+0553
There is no dearth of court poets in the Congress. But when Vajpayee praised Sonia, the fruit was that much sweeter. Indeed, the PM’s soft focus on the Congress president in the Rajya Sabha, on the concluding day of the winter session of Parliament, has set party strategists thinking. "If Soniaji can woo Vajpayee, think of how she can impress the voters!," an excited Congress neta from UP exulted.

In fact, such is the jubilation at 10, Janpath that the think-tanks in the party and at the Rajiv Gandhi Foundation are currently working overtime to see how Soniaji can capitalise on the goodwill she has earned from the prime minister.

One suggestion is that she should periodically enquire after his health and send him Swiss chocolates spiked with bhang for Holi. An Italian dinner at Baisakhi followed by Indian desserts was also seen to be in order. One 10, Janpath flunkey even suggested that second-rung Congressmen should go on holidays to Mauritius with their bjp counterparts.

The general drift has been that there should be closer ties between the two parties since the bjp has proven it’s no different from the Congress. "We had Harshad Mehta, they have Ketan Parekh and the uti. We had Bofors, they have their own defence scams. It’s time we got together and build the nation," a senior cwc member observed wisely.

The excitement has spread to the Sangh parivar as well. A nationwide campaign is to be launched to spread the news of the newfound friendship. Pracharaks have been on TV praising Sonia and the fact that she prefers rotis to margarine. The parivar is also to dispatch a team of scholars to Italy to prove that Julius Caesar and all Romans were actually practicing Hindus misguided by time-travelling apparitions of Mussolini. Also to be released is a research paper which conclusively proves that Quattrochi was planted by Nicaraguan commies to "defame the fair name of Rajiv Gandhi".

With further blurring of the lines, the parivar hopes to bring true political unity. As a senior pracharak points out: "India will be a land of no discord and the new formation that governs the nation will usher in peace, progress and prosperity."

And yes, no marks for guessing the name he has for this new platform—The Akhand Bharat Congress Party!