Who killed Suryanarayana? Was it the Taliban or the ISI? 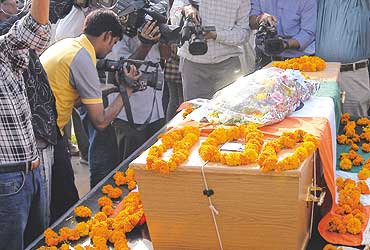 outlookindia.com
-0001-11-30T00:00:00+0553
The abduction and beheading of Indian telecommunication engineer K. Suryanarayana continues to stir controversy, caught as it is in a swirl of claims and counter-claims—and the games the big powers are playing in Afghanistan. A new element was belatedly introduced into the episode last week—a private Afghan TV channel, Tolu, quoted a Taliban spokesman, Mullah Mohammad Sadiq, as saying that Suryanarayana was killed at the behest of Pakistan's ISI. Sadiq said Suryanarayana's death angered those in the Taliban who wanted to conduct negotiations with India.

Sections of the international media, particularly Indian TV networks, picked up the story highlighting the Taliban spokesman's 'confession' as proof of the ISI's complicity in the incident. Pakistan promptly issued a denial; its foreign ministry spokesperson Tasnim Aslam accused Tolu TV of orchestrating an anti-Pakistan campaign, arguing that it's simple to place a turban on anyone's head and proclaim him as a Taliban spokesman. Her conclusion: Sadiq was a fake Taliban.

Taliban spokesman Dr Mohammad Hanif, known to select mediapersons here, stepped into the scene. Talking to Outlook, he protested that neither he nor the two other official Taliban spokesmen had spoken to Tolu. "The Taliban leadership has repeatedly made it clear that beside me, the other Taliban spokesmen are Abdul Hye Mutmain and Qari Yousaf Ahmadi. No one else can speak on the Taliban's behalf, though at times we facilitate media interviews of our top military commanders, Mullah Obaidullah and Mullah Dadullah," he said.

Dr Hanif also alleged that Tolu TV is sponsored by the US, and fabricates stories to slander the Taliban. "Earlier, too, Tolu had put a turban on the head of one Mullah Dost Mohammad and had interviewed him as a Taliban spokesman. Now it's been done again in a very unethical way," he bristled. Denying any links between the Taliban and Pakistan, Hanif said, "We are an independent body fighting for Islam and liberation of Afghanistan from US-led forces. There are no differences among the Taliban as all of them are loyal to Mullah Omar and consider him their supreme leader." He said that it had been the Taliban's strategy to abduct Suryanarayana, but the plan went awry when he tried to escape and was shot dead.

Another twist to the episode came through Jawed Ludin, an advisor to Afghan President Hamid Karzai, who said the Afghan government had asked Pakistan for clarifications on media reports about the ISI's involvement in the incident. Simultaneously, the media reported sources close to the Afghan government as mentioning names of those Taliban commanders whom their comrades overruled to kill Suryanarayana. These reports, again, reiterated the ISI's complicity in the murder.

The Taliban, too, contributed to the confusion. Initially, Qari Yousaf Ahmadi, a Taliban spokesman, had insisted that Suryanarayana wasn't beheaded, instead he was shot dead when he tried to escape. Subsequently, he changed his version. He said, "The Taliban beheaded him in anger. He broke free and beat up a Taliban guard while the others were away. It was then that other Taliban guards shot and beheaded him." He claimed the Taliban heads had reprimanded their men for beheading Suryanarayana, and reminded Outlook that they had already expressed regret over the incident.

Tolu TV's role in the Suryanarayana story, too, is intriguing. It's one of the five TV channels floated after the Taliban fell in December 2001. There are three other private channels—Ariana, Aaeena and Shamshad. The fifth, RTA, or Afghan TV, is state-owned—and was banned during the Taliban's six-year rule on the grounds that it's un-Islamic to telecast live pictures of human beings. There's a war among these channels to pull viewers, intensifying the race among them to break stories, often at the expense of truth. The confusion over the Suryanarayana reports could have been an outcome of this rivalry.

Also, the Afghan media is particularly critical of Pakistan because of its earlier support to the Taliban. With the Afghan government consisting of anti-Taliban forces, the ties between Kabul and Islamabad have remained frosty. Pakistan's U-turn on Afghanistan post-9/11 hasn't effaced from public memory Islambad's role in Afghanistan before the US invasion. It's still accused of clandestinely supporting the Taliban, whose guerrilla attacks have become more sophisticated and daring. The twists and turns in the Suryanarayana episode could have been fabricated to tar Islamabad.

The Suryanarayana episode has also brought to fore the decades-long competition between India and Pakistan to gain influence in Afghanistan. Pakistan had an edge when the Afghan mujahideen and Taliban were in power. The Taliban's fall enabled India to recover the influence it had during the Communist rule of Afghanistan. India's new influence is mostly at the expense of Pakistan, which has been accusing Delhi of fomenting trouble in Balochistan and Waziristan through its consulates in Kandahar and Jalalabad. Islamabad is concerned about the several Indian firms which have bagged contracts to build roads in southern and southwestern Afghanistan bordering Pakistan. Add to this the pro-India Northern Alliance's dominance, though somewhat diminished now, of the Afghan government. All this has spawned the belief that Pakistan wouldn't mind exploiting the Taliban to hamper the growing Indian influence in Afghanistan. There can be just theories about the Suryanarayna killing—no final truth.