They Beg To Defer

India holds on to an archaic beggary law. The underclass falls through its loopholes. 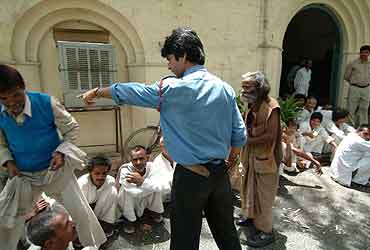 outlookindia.com
-0001-11-30T00:00:00+0553
There are way too many beggars on Delhi streets and too few in the beggars' homes. Recently, this gentle reminder from an official of the social welfare department (SWD) to one of his junior colleagues had a cascading effect. SWD officials and the police conducted a series of raids over the past fortnight to arrest droves of homeless people—who were either asking for alms or looked like they would be happy to accept them. Their fate will now be decided in the next few weeks or months—whether they will go free or will be put away in institutions modelled on Victorian workhouses.

In case you didn't know, begging is a criminal offence in the capital of India and in some other cities too. Since 1961, Delhi has been governed by the Bombay Prevention of Begging Act, 1959, which makes begging in public places a crime and punishable by the law. Anyone who is homeless and looks vaguely unkempt or unemployed is liable to be booked under this Act. Mistakes and abuse can happen and they do—people picked up and tried in a special court, perhaps the only one of its kind in the world in this day and age.

If convicted, they are stamped and certified as "beggars" and sent to an institution (Lampur and Kingsway Camp in Delhi). "They are called homes, but for all practical purposes they are jails where convicts are locked up from one to 10 years. It's the most efficient way of criminalising poverty in this country," says Indu Prakash Singh who heads the Ashray Adhikar Abhiyan (AAA), a campaign for the homeless in Delhi run by ActionAid, India. The AAA has facilitated a legal aid mechanism for the accused in the beggars' court.

The court, ironically called the reception-cum-classification centre, is a tiny room in an old Lutyens'-style bungalow in Kingsway Camp. At least 40 men—somehow no women are seen that Tuesday morning—have been lined up in front of the courthouse, to be summoned by the magistrate. Most have been scrubbed clean, given a bath, put into white kurta pyjamas—in some cases slipped on top of their usual clothing—and made to comb their hair by the welfare department. They look clueless and sheepish.

A private security guard in blue is in charge. He occasionally lifts his club and growls when someone steps out of the queue or tries to whisper to the next person. They are allowed to squat, though. There is a policeman who's going through an elaborate training session with one of them. He's instructing one of the accused how to greet the judge when he's called in. Somehow, the man just can't get it right.

Everyone stands up respectfully when the judge walks in. The munshis bow and start the roll-call. The average exchange is along these lines:

Judge: Were you caught begging?

Accused: No saab, I work.

Judge: What work do you do and where?

Accused: I clean dishes and do odd jobs in Karol Bagh.

Judge: Why then does this paper say you were caught begging?

Accused: I don't know saab, I can't read or write.

Mostly the person has no clue about his future—whether he has been convicted, released or granted bail. He only knows that his chance to be heard is gone. He goes and squats in the queue again. We are not allowed to ask questions.

The decision is clear in some instances, as in the case of Anna. He looks a bit eccentric and claims that he is a hakeem but is unable to give the magistrate the details of his work. He is told that the department will have his head examined and then take a decision on whether or not he is free to go. Anna bows before the magistrate in compliance and leaves.

Ram Prasad (name changed), 70, is from the Hanuman Temple area in Delhi's Connaught Place. "I was about to go to sleep on the pavement when they got me, can you imagine my humiliation, they think I am a beggar," he says lowering his head. 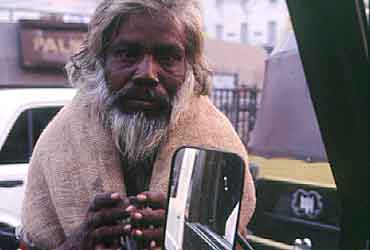 The AAA activists and lawyers who represent them say that a whole range of poor people who are homeless—rickshaw-pullers, hawkers, paramedics, street performers and anybody who earns a living on the streets but does not have a home—are clubbed together as "beggars". Singh points out that 90 per cent of the homeless—there are nearly a lakh of them in Delhi—are working people. Those who are not, are "people living on the offerings of caring citizens, calling them anything else will be adding insult to injury".

But what is scandalous is that clauses (a) and (d) of the Act open up the possibility of just anybody who appears unkempt and is of no fixed address—even if that person has never asked for alms—of being dragged to the beggar's court and jailed. (Clause (a) defines begging as "soliciting or receiving alms in public place, whether or not under any pretence such as singing, dancing, fortunetelling, performing, or offering any article for sale"; clause (d) describes beggars as people "having no visible means of subsistence and wandering about, or remaining in any public place in such condition or manner, makes it likely that the person doing so exists by soliciting or receiving alms".)

The administration in Delhi regularly "cleanses" the face of the city, particularly when there is a visiting foreign dignitary or an international event and the usual suspects are loaded into police vans and taken away. Cases of people from the states trying to locate addresses in Delhi and/or running out of money and ending up on the streets are quite common. One such person gave this testimonial to an AAA activist: "I used to work in a factory. I can't go back and face my son. He studies in class 12. I've everything in my house, TV, fridge, everything. I have only one dress to wear. After eight months when I go home what would I tell my children?"

While there can be arguments against organised begging and debates over how poverty can be dealt with, there's no doubt that this Act is against all human rights and every tenet of democracy. Says Baby Mathew, ActionAid's country director, who was formerly with Bangalore's National Law School: "If there's a list of laws in India that must be repealed, this one would top my list. If there's one law which is anti-poor and anti-democracy, it is this one." Mathew points out that the IPC was written up by Lord Macaulay "off the top of his head" and although it's a tribute to the man's genius, "it is time some of these regressive laws are scrapped".

Less than a month ago, the AAA approached NHRC chairperson Justice A.S. Anand with this proposal. "Justice Anand is in favour of amendments to the Act," says Mathew, but adds they would have to be so radical that it is better repealed.

Meanwhile, the staff in the SWD at the Kingsway Camp home bristle with anger that they must be saddled with this job. "Absolute nobodies are picked up from the road and turned into vips here, we have to feed them, clothe them and ensure that they don't die, because if they do we've had it," says one of them.

Perhaps, just the kind of sentiment that will change the life of a person who is convicted for begging.

ETmail: Can You Read This