Wasn't the Muslim supposed to be the common enemy? 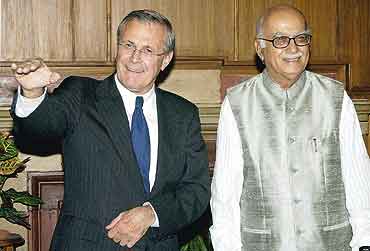 outlookindia.com
-0001-11-30T00:00:00+0553
The great men of the Hindu Right must be feeling rather small these days. For the Clash of Civilisations they so fervently believe in appears to be happening with the "good guys"—George W. Bush' US of A—which the advocates of Hindutva so admire.

For several years now, ideologues of the BJP have openly sought to establish an India-US-Israel axis, three nations they perceive as fighting the bearded "bad guys" (read Muslims). Narendra Modi's politics in Gujarat was specifically driven by the post 9/11 world, followed by the December 13 attack on Parliament. Less than three months later came the massacre of Muslims in Gujarat with Modi openly speaking against the community and juxtaposing them with "Mian Musharraf".

In the world according to Modi, if George Bush was dropping bombs on Muslims in Afghanistan, he too was doing his bit to show the community its place in Gujarat. He more or less said so after Bush was re-elected to office last year in an election that polarised the US. The Gujarat CM had declared grandiosely that his campaign had been very similar to Bush's. He also famously said Bush was speaking the same language against Islamic terrorists that he himself employed. It must be a rude shock for him to discover that for the US President, he is not just a non-entity, but an undesirable one at that.

L.K. Advani must be feeling even more let down by the neo-con Bush establishment he so idolised. The erudite ideologue has never made secret his admiration for Samuel Huntington's Clash of Civilisation thesis. In that provocative essay, Huntington writes: "In the emerging world, relations between states and groups from different civilisations will often be antagonistic. At the micro level the most violent fault lines are between Islam and its orthodox Hindu, African and Western Christian neighbours."

Advani clearly sees India as this "Hindu" entity or else he would not be quoting Huntington quite so often. He did it as recently as March 3 this year when he was chief guest at a function to release the Hindi translation of V.S. Naipaul's India: A Wounded Civilisation. Referring to the Harvard professor's more recent work, Who Are We, Advani said that he wished someone would do a similar work on the essential nature of India as Huntington had done on the US. In fact Clash of Civilisations sits prominently on Advani's desk along with biographies of Israeli leaders like Benjamin Netanyahu and Simon Peres.

Advani's affinities showed up quite often in his actions. He made two trips to Israel and the level of security collaboration between the two countries dramatically increased during his term as home minister. His trip to the US in June 2003 too was revealing. He made an effort to meet all prominent neo-cons, including former Attorney-General John Ashcroft; Donald Rumsfeld called on him. He also tried to meet Paul Wolfowitz, one of Bush's key advisors who has recently been appointed head of the World Bank, but it did not materialise. More crucially, Advani virtually agreed to the US request to send Indian troops to Iraq, though the Vajpayee regime had to quickly backtrack on that after his return to India.

But for all the admiration of the American right, conflict is inevitable when it comes to the US Bible belt's advocacy and financing of Christian conversions in India. This is the main battlefront for the vhp (India's Ku Klux Klan?). Indeed, as Modi and Advani must have learnt, the US has its own agenda and interest groups that determine its actions in the world. They do not need the help of Hindu warriors.