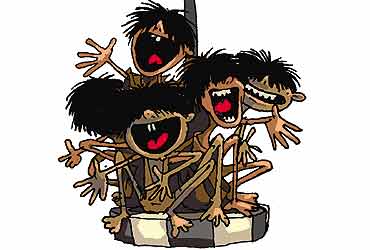 outlookindia.com
-0001-11-30T00:00:00+05:53
These days I go under the seat at traffic lights. There are too many children begging by the wayside. The conscience money I part with runs out soon after I hit the expressway from home to office. After the fourth light, having reduced myself to so much change that I toss into small hands caked with dirt, I find I am nothing more than what I have given.

The poem I thought up in the morning, the rare meteor of words, burns to ashes as it streaks past the Reality Sphere. India is perhaps the only Third World country with First World illusions of grandeur. Why else would we celebrate, say, the twins born to Julia Roberts? As Hamlet said, what’s Hecuba to me or me to Hecuba that I should weep for her? India is the Madame Bovary of the Eastern World. The half deceived, half deceiving self. Which is why the world inside your head is in continuous conflict with the appalling reality outside. The Word against the World.

To a thinking man, happiness is a false category. Especially if you are an Indian. You may travel in a souped-up Merc with a portable bar and a hand shower, but you are still travelling the potholed road that millions mistake for a Byzantine network of loos. No wonder that the beautiful people are partying nonstop. You stop drinking, doping and dancing for a moment, and then you find that moment is the eternity you have been trying to avoid all your life. If beautiful people stop partying, the world will turn ugly for them. Celebrate then the air-conditioned nightmare.

There are, according to one estimate, three million street children in India. Nearly 80,000 of them are on the streets of India’s number one city, Bombay, where I stay. An equal number of the naked hordes wander through the dust-laden roads of Delhi, battalions of brown baby phantoms, visible to the naked eye, but dead in every respect before they are born.

Our tycoons whose success we devour in the form of self-help books (Ten Traits of Successful People, etc), our politicians whom we merrily elect to arbiter our future, and the bald and the beautiful—the 10-million-strong articulate English-Speaking Republicans of India—see the future of India go begging on a daily basis, and think of happiness. So what they do? They go get a Guru, the Mental Masseur, the bearded gent who grants you peace in the time of war. Absolution guaranteed every second Saturday. A society of Absolute Absolutionists!

We make a noise when farmers in Andhra Pradesh, Kerala and Maharashtra commit collective suicides. That’s far away and so, safe to sympathise. We are free to be outraged. Outrage adds to our happiness. It reaffirms our faith in our moral being. There are dozens of children dying of starvation on the road every day, unsung. That’s urban and in our face. What shroud of self-satisfaction and spiritual claptrap serve to cover the bodies of the little dead?

At one time, the Left was supposed to be the spokesman of the poor. Now they speak for trade unions and public sector employees. When is the last time you heard a politician speak of the hundreds of thousands of the displaced population whose young ones weave their way through whizzing cars at signals for a living? The real martyrs of urban development in India are infants.

The mind is a function of the body. A sick person needs a doctor. A poor pregnant mother needs social security. A hungry child needs to be fed. Happiness is the realisation of your potential. But to realise it, first the society must respect the basic material needs of the individual and try to put systems in place that will take care of it. The Constitution guarantees a people’s civil liberties. But not much of it makes sense when millions walk the roads of the big cities that are suppose to build Tomorrow’s India.

I have stopped writing poetry. The written word no longer seems a way of happening, as Auden put it. I used to think I was happy when I wrote. Vanity. The truth is I can’t ever be at peace, which is happiness without laughter, knowing there’s a child dying somewhere on the Indian roads. And there are so many of them. A nation that doesn’t care for its children—and, ah, its poets!—forfeits its future. It took me nearly half a lifetime and all of India to realise it: No Happiness. Shall kick the bucket without knowing what the hell the damn thing is.

(C.P. Surendran has published three poetry collections, including Canaries on the Moon, 2002.)