'There Won't Be Any Friction'

On why, while she refused to shave her head, she decided to emulate Sonia's act of renunciation, declining a cabinet berth. 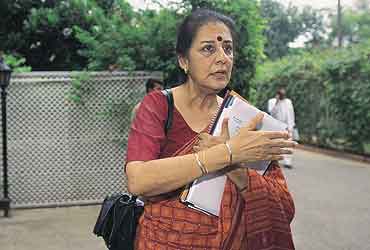 outlookindia.com
-0001-11-30T00:00:00+0553
When Sonia Gandhi declined to become PM, irate party workers from Amethi told Ambika Soni to "shave your head like Uma Bharati" if her grief was genuine. She didn't take their advice, but she did emulate Sonia's act of renunciation, declining a cabinet berth. In an interview, she tells Outlook why. Excerpts:

A cabinet berth is something all politicians want. Why did you turn it down?
Mrs Gandhi's decision not to become PM had a tremendous impact, raising morale and leaving the BJP without a plank. But when the whole exercise of forming the cabinet started and everyone wanted to be in government, I found myself thinking who was going to be in the party? If some of us were to stay and work in her team we could keep up the high she had generated.

There was also a personal element. All along in the last six years, people have said I've been getting whatever I have because I am a sycophant. Getting a cabinet berth would have been seen that way. And that's not the case; I have a passion for politics, but it is not my profession. Having taken the decision, I feel great, exhilarated, unassailable...I don't know how long the feeling will last!

Weren't you the least bit tempted?
I was tempted to the extent that I wanted that letter (of appointment to the cabinet). If I had said no earlier, cynics would say, "?ban kab rahi thi" (when was she ever in the reckoning)?

Why weren't youngsters accommodated in the government?
Young people don't necessarily have to come to government. Over the years, politics has become power-oriented. What a DCC or PCC chief says carries less weight. How do you give due importance to the organisation? Mrs Gandhi has done just that by saying that she will continue to lead the party from the front. Our youngsters can be involved in the party.

How do you plan to revive the party in states where you've done badly?
The party was dormant in MP and Rajasthan. We had high-profile CMs who had done a good job. But where was the party? All importance is given to MLAs so the party gets discouraged, demoralised. With Mrs Gandhi leading the party, she will act as a bridge and a watchdog on governments.

And in states like UP and Bihar?
It is not an easy question to answer. We need to fight for our political space despite being in alliance. It cuts both ways. In TN and AP, we've increased our seats thanks to alliances. In Bihar, without in any way opposing Laloo, we need to regain our political base. In UP, I see a lot of potential. The Congress leadership appears determined to make it one of the focal points.

Do you foresee a major reorgansation?
Everyone has resigned—all CWC and AICC members. This is as good an opportunity as any to bring in new faces and infuse the party with dynamic leadership. The party cannot appear to be status quoist.

Will the party-government interface be without any friction?
Mrs Gandhi backs Dr Manmohan Singh 100 per cent. As head of the party, she provides a political base. For his part, he's very attached to her. She will have to put in a mechanism to institutionalise the interaction between the party and the government. She may empower some people to act as interface. One has to watch out; it is our government and we should do nothing that could embarrass it.