There Were A Million Revellers That Night 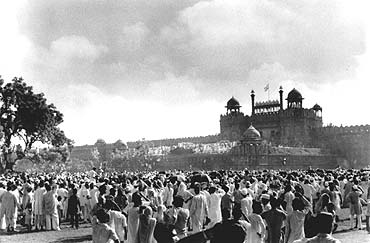 I had made up my mind as soon as the date was set: I would bunk medical school and go to Delhi to witness the first Independence Day celebrations. Everyone was set against it, including Gandhiji. "Are you mad?" he asked me when I met him in July and told him of my intention of going to Delhi for the celebrations. "What is there to celebrate—I shall weep tears of blood that day." But I was adamant. "Neither you nor I can change history," I told him with the easy familiarity I always assumed with him. "If you go, I shall never talk to you again," he declared, but I knew him for far too long to believe that he would actually carry out his threat. I knew Gandhiji from the time I was nine, when he came on a visit to Jamia Millia which was then a primary school of some 75 children and 15 teachers. Since I was the only child who knew Gujarati, I was picked to deliver the welcome speech to Gandhi as we all sat in a circle around him. After that, he never forgot me, perhaps because he already knew my father, Mustafa Hasan Kadri, in Ahmedabad. My mother didn't want me to go as well, but her reasons were different: she was afraid of possible violence. But when Father readily gave his permission, she only insisted that my cousin, Sharif, accompany me. Both of us had turned 20 that year.

The first thing I started hunting for was a camera, but they were hard to come by in those days. I persuaded a friend, a fellow medical student in Ahmedabad, to lend me an old magna slide camera, a family heirloom bought by his grandfather. But in the end, I managed to get hold of two cameras—a professor lent me his brand new Ikonta. Getting film was even more difficult. It was barely two years after the War, and film was either unavailable or prohibitively expensive. Someone suggested I go to the market where surplus war goods were sold. There we managed to lay our hands on a roll used for aerial photography during the War. It was 12 inches wide with paper backing and I had to take it into a dark room to cut it into the regular B2 size.

Sharif and I arrived in Delhi on August 13 morning, and went straight to the Jamia campus where I had plenty of friends. In the evening, I called on Zakir Hussain who also lived on the campus. He was astonished to see me at his doorstep. "What are you doing here?" was his abrupt greeting. "Things are only going to get worse and it's too dangerous for you to be out in the streets at this time." But he soon relented, and even gave me a sheaf of passes to the visitors' gallery of Parliament for the midnight transfer of power session. "Don't take your camera," was his parting advice, "the crowds will be unmanageable."

We got to Parliament House in good time, by 9 pm. But the visitors' gallery was already full, there was no getting in, even with passes. So we made do by standing on the steps, from where we had a good view of the leaders as they entered Parliament. Nehru looked quite grim, despite a large tilak on his forehead and a garland of flowers around his neck. He was the only one looking so colourfully Brahminical, all the rest, including Sardar Patel, were their usual austere selves. By midnight, the grounds outside Parliament House were packed, some 5,00,000 people at least, relentlessly shouting slogans: Gandhiji zindabad, Mountbatten zindabad, Nehru zindabad. But a pindrop silence fell outside when the speeches started. You could barely hear them over the primitive mikes, but many started crying when Nehru gave his 'tryst with destiny' speech. Personally, I thought Sarojini Naidu's speech was more impressive—she was lyrical and spoke like a true poet, but strangely no one remembers her speech at all. I was anxious not to get stranded and so we left before the ceremony ended. We got into a tonga from India Gate, but by the time we made our way to Jama Masjid, we were too late to catch the bus to Jamia. But it was a good thing we didn't make it back to Jamia that night. Wandering around in Chandni Chowk, I caught a breathtaking glimpse of the clock tower, Ghanta Ghar, all lit up for the occasion. I stopped to take some pictures of this magnificent tower. Everywhere, there were revellers, it was like a festival but curiously subdued. It was 2 am by the time I finished with the pictures and realised we needed a place to spend the night. There was no option but to walk into Coronation Hotel at the corner of Chandni Chowk. We shelled out Rs 9 for the few remaining hours of the night. Nine rupees was a lot of money in 1947.

But the next morning we could make our way to the Red Fort in good time for the flag-hoisting ceremony. The Union Jack had come down on the 14th evening and the tiranga was going to be hoisted at 10 am on the 15th. The event was much publicised, with posters pasted on every wall, and hundreds of thousands responded to the public invitation. By 8.30 am when we got to the Red Fort (armed with a press pass I had issued to me from a newspaper in Ahmedabad) the place was packed—people everywhere, on the ramparts, against the walls, on the grounds, not an inch of space to stand. And still more people were arriving, mostly dehatis, riding on bullock and camel carts. It was futile to try and take photographs amongst that crowd, so I started walking back, towards Jama Masjid. I positioned myself between two trees and took two shots of the Red Fort—before free India's flag went up for the first time and after.

By the time the flag-hoisting was over, we were ravenous. We walked into Urdu bazaar and stepped into my favourite restaurant there for a cup of tea and a roti topped with rich cream. In Urdu bazaar, the subdued atmosphere I had noticed the previous night was even more palpable. But I didn't stop to worry too much; we had barely got any sleep the previous night, and now we stretched ourselves out on the lawns between Jama Masjid and Red Fort until it was time for the next flag-hoisting ceremony, at 4.30 pm in the Ramlila Grounds, or Parade Grounds as it was called then. This time Nehru was going to hoist the flag in the presence of the Mountbattens, and a circular platform, about one and a half feet high, had already been set up with a flag post in the middle. Thanks to my spurious press pass, I stood right next to the platform, instead of among the crowd which was cordoned off. Nehru arrived first, waiting alone on the platform for the Mountbattens who were late. They were riding in the viceregal golden carriage, which had to stop many times on the route for them to get out and shake hands with the huge crowds lined up along the route. When the carriage finally arrived at the venue, the crowds broke through the cordon and surrounded them. They eventually extricated themselves from the enthused crowd and reached the platform. Then Lord Mountbatten bent over Nehru's ear and whispered something. I could see Nehru's fair face getting very red as Mountbatten spoke. Suddenly, he sprang down from the platform and disappeared into the crowd, his baton clutched under one armpit. It was many minutes later when he returned, leading a young girl by the hand: it was Pamela Mountbatten who had been swallowed up by the crowd somewhere along the way. Once safely aloft, Nehru broke into a sunny smile of triumph, which is when I clicked him in this picture.

We would have left Delhi the next day. But when I went to say goodbye to Zakir saheb, he asked me if I would like to go for a garden party the new minister of education, Maulana Azad, was going to hold on August 18. It was an Id-cum-Independence Day celebration. I jumped at the chance to meet all the leaders in one place. Zakir saheb wasn't going—with the killings having just started, he was in no mood to celebrate.