There Is No Secret Garden

The murky side of Telugu films, actress caught in flesh trade 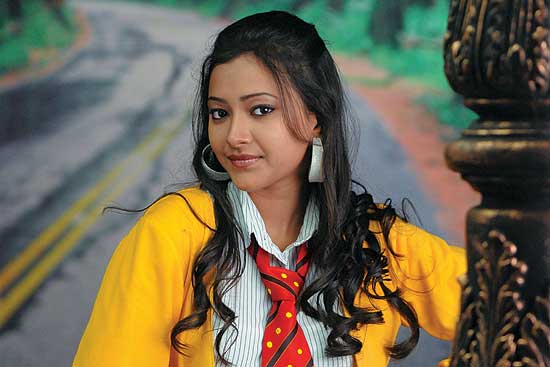 Some 10 days before she was picked up by the police from a high-profile hotel in Hyderabad’s tony Banjara Hills locality, the actress Shweta Basu Prasad had been messaging film journalists about her documentary Roots. She was also co-pro­­ducing and acting in a short film, Int. Cafe-Night, starring Naseeruddin Shah, Shernaz Patel and Naveen Kast­uria. These two projects were close to her heart and any journalist meeting her was first briefed about them. She also mentioned that she visited the Kad­apa dargah recently where she had met A.R. Rahman. “I had wanted A.R. Rahman to be part of my documentary film but did not know how to reach out to him. It was a miracle that I met him at the dargah. When I asked him to be part of it, he readily agreed,” Shweta had gushed.

Over the last six months, Shweta had been the target of malicious gossip after being caught in a sting operation by a Telugu TV channel. While You­Tube clips now show a morphed face, the earlier version showed a bespectacled Shweta in a short, plunging dress, bargaining with the undercover TV reporter about her “going rate” and how she felt that the hotel was the safest place. She also mentions a gue­sthouse in Man­ikonda, HiTec City. Shw­eta says that anything below Rs 2.5 lakh is unacceptable and even suggests to the reporter that he take Rs 3 lakh from “the client”, keep Rs 1 lakh for himself and give her the rest. Present with her in the video are a couple of assistants who had arranged the meeting in a hotel. The rep­orter is told that Shweta would also need proof of identification such as an Aadhar card and that she would take the final call on the client.

Some Other Telugu Actresses Caught In The Flesh Trade

The sting gave the channel great TRPs and viewers some prurient moments but the police reacted with caution given that technology these days makes audio and video tapes highly unreliable. The actress herself said she was least bothered by the issue, shrugging off questions. But by then, the Task Force police were on to her, tapping phones and collecting leads. There were other names too but the 23-year-old Shweta had said too much in the sting not to be the first target. In a pol­ice release after she was arrested and sent to a remand home, Shweta reportedly admitted that she had made some wrong career moves and was broke. It seemed that some people enc­ouraged her to get into prostitution after all other doors had slammed on her. In the release, Shweta said she was helpless and felt she had no other opti­ons left. The astonishing disclosure left many wonder-struck because Shweta was often spotted with her par­ents at filmi events. Her mother, a Bengali, and father, a Bihari engineer from Jamshedpur, came across as educated, steeped in music and theatre. They were proud of their daughter’s achievements not just in Telugu films but in Tamil too. In fact, after the runaway success of her maiden Telugu film, Kotha Bangaru Lokam, Shweta had gone back to finish high school.

“For a three-month shoot, actresses like Shweta would get Rs 15 lakh. But offers dried up, and she was frustrated....”

When she spoke, Shweta always came across as an intelligent girl who knew her cinema. In Kotha Bangaru Lokam, she acted alongside Varun Sandesh, Jayasudha and Prakash Raj but stood out in her role as a star-crossed lover. The boddu muddu gumma (plump, cute girl) had given the industry much to rave about. That was in 2008. Barely a couple of years afterwards, Shweta Basu was reduced to doing B-grade films, many of which stayed in the can. A look at some of her item numbers makes one wince. Was this the same child actress who performed so effortlessly in the popular soap Kahani Ghar Ghar Ki and award-winning movies like Makdee and Iqbal? A producer who knows her says “her filmstar dream was crashing all around her and she was des­perate. For a normal three-month shoot, act­resses like Shweta would make around Rs 15 lakh. But with offers drying up, she was getting frustrated”.

There are two versions to the arrest of the actress on August 31. One says the police staged a decoy operation with a constable posing as a client to trap Shweta and a couple of pimps. The other version is that Shweta was caught red-handed with a businessman client in the star hotel which was raided on a tip-off. This businessman is reportedly the fra­nchise owner of a cellphone comp­any. Deputy commissioner of police, West Zone, Hyderabad, V. Satyanar­ay­ana, tells Outlook that the actress “was trapped after the police began tracking the calls of broker Anjaneyulu alias Balu who was negotiating on behalf of the actress”.

According to Satyanarayana, the actr­ess checked into Room No. 659 at the Park Hyatt Hotel in Banjara Hills and was seeking clients. The raid was conducted by a Task Force additional DCP on August 31 at 11.30 pm. The deal with Shweta Basu was struck for Rs 1 lakh. A police constable posing as a dummy customer was sent to the room. Later, the actress was arrested and sent to the Prajwala remand home. “The actress was very clearly putting herself out in the market and she agreed that Balu was to be given a 15 per cent commission from her fee. I do not know if it was desperation or overconfidence or sheer foolishness but the actress had become pretty brazen in her dealings. We acted as per the law,” says the DCP. The police officer denies that “any client” was present in the hotel room when the raid was conducted. It was a decoy operation, he clarifies.

An actress who didn’t want to be named told Outlook that Shweta’s activities were in fact “exposed” by another actress running a parallel sex racket. “She was losing clients to Shweta’s ring and was none too happy about it. It was someone from that cartel who gave information to the police,” the actress says. This other actress, who too has had several hits, is now finding it difficult to land roles and is mostly seen in item numbers. “It is sad that alongside intense competition for roles, actresses are now competing for clients in the shady sex business,” she says.

The Telugu film industry is not new to such rash upheavals. There have been whispers of other top actresses and their dalliances with various politicians. Just a few days after Shweta’s arrest, another small-time starlet named Divyasri and her associates were arrested from an apartment in the outskirts of Guntur. Her only claim to fame was a small role in a movie called BTech Babu.

Film reporters in Hyderabad say the casting couch is a reality but even they speak of it in hushed whispers. “There’s a story of one veteran producer who always picks heroines for both talent and her willingness to sleep with him. That said, the joke goes that he’s very disciplined otherwise, so he only spends four hours with the actress. After all, she has to get some sleep and look good on camera in next day’s shoot,” says a reporter laughing.

Tara had threatened to expose various “bada babu” clients but all that melted into the backgound after she got bail.

This isn’t Tollywood’s first case eit­her, of actresses getting caught. Actre­sses like Saira Banu and Tara Chowdary have been arrested in prostitution cases in the past. In 2012, Tara’s arrest and her one-month incarceration had raised a storm. The actress had threatened to expose various “bada babu” clients but all that melted into the background once she secured bail. Telugu Desam MLA from Telangana Revanth Reddy and senior actor Rajasekhar were two names she was linked to. Revanth Reddy hotly denied the allegations as the creation of wishful thinking of his Andhra detractors. Rajasekhar said he had posed for photos with both Saira Banu and Tara Chowdary as part of his normal celebrity commitments but said that there was nothing more to it. When Outlook contacted Sunitha Krishnan, co-foun­der of rehabilitation home Praj­wala, where Shweta is currently lodged, she was livid. “Why is the media trying to rip apart a poor girl who is in so much pain? Do you realise the kind of impact such coverage will have on her future? Nobody talks of the men involved who are equally responsible. Leave Shweta alone,” Krishnan exclaimed.

To be sure, there have been pockets of support for Shweta who is seen as a victim of circumstance in the big, bad film world. Sakshi Tanwar, who played her mother in Kahani Ghar Ghar Ki, has voiced opinions similar to Krishnan’s. Director Hansal Mehta (of Makdee fame) has offered her a film, Nagesh Kukunoor has extended support. Happy Days director Shekhar Kammula says Shweta is “evidently the bakra and is just one of the names in a large chain”. Kam­mula, who runs the ‘I care, I react’ campaign in Hyderabad colleges, is firm that respect for women alone can stop such cases. “Be it rape, acid attacks on women, or women being rescued from brothels, the und­erlying factor is this; our society feels that women can be used any which way. It is time we put a stop to these dangerous perceptions,” he says.

Actor Kamal Kamaraju, who acted in Kammula’s film Anand, feels an extra irritation about the moral hullabaloo. “There’s a lot of hypocrisy going on. Many men have expressed outrage. But we have to und­erstand that this is not a Nirbhaya incident where a woman was brutally raped or molested. It is a case of prostitution where a woman was selling her body for whatever reason. I have met Shweta a few times and let me tell you, she is an extremely intelligent woman with varied interests in photography, music and documentaries. I think the larger issue should be whether we want to make prostitution legal or not. We all know that it’s the oldest profession in the world. Besides, it isn’t just limited to the film world, it’s there in every sector,” says Kamal.

After Shweta’s arrest, the police have not made any other arrests in the case and investigators are usually tight-lipped, saying celebrity cases are dealt with caution. But one official admits that Shweta has been involved in the sex trade for well over two years and had become “so bold that she was directly dealing with clients”. This in turn had landed her in the sting net. As of now, Shweta is one the inmates of Prajwala, sharing her thoughts on music and art. When she comes out, will the industry be kinder to her?