Then It Rained Morbid

Seven bombs rip through the city's lifeline. It still staves off civic chaos but how much more can its people take? 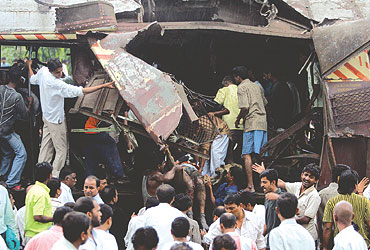 outlookindia.com
-0001-11-30T00:00:00+05:53
Seven lethal bombs, seven Western Railway suburban trains. Seven explosions in as many minutes beginning at 6.24 pm on Tuesday, July 11. Nearly 1,000 innocent families suffered various personal tragedies; a bustling metropolis was scarred and battered once again. Terrorists suspected to be of the Lashkar-e-Toiba (LeT) had scripted the second major chapter of Mumbai's tryst with bombs—serial blasts 14 years ago had claimed over 250 victims—and local operatives had helped to carry out the sinister plan.

Within moments, Mumbai had been brought to its knees. At Khar station, where the first bomb exploded, chaos and fear had overtaken everything else. Clueless men jumped from the torn compartment; those slightly injured made their way to the platform; those who kept their wits about them began extricating the badly injured and the dead from a mangled mess of iron, steel, foam and cushion that was their compartment some seconds back. A man pulled at a tie to reach a body and found it headless, another man was trapped under it with injuries. Even as some breathed their last on the platform, news trickled in of a blast in another train at Mahim, then at Jogeshwari, then Borivili, Bandra, Matunga and Bhayander. All first-class compartments of trains heading north into the suburbs, carrying professionals, executives, traders, businessmen home.

"There was a deafening blast, suddenly people were dead or dying, a dismembered hand lay on the tracks below. I don't know how but I and an old man next to me survived; maybe because he was reading his Hanuman Chalisa and I was glancing at it," recalls Rishi, a media student. Middle-aged businessman Rakesh Gupta saw smoke, and men in blood trying to jump out of the coach at Matunga. "I was in the train when there was a big blast at Mahim. I saw bodies without heads, no legs, no arms. We picked up so many bodies, then the police walked in and shouted: Side pe! Their attitude was simply unbelievable, they just didn't care," says Sachin Narvekar.

The Railway Police Force personnel at blast sites had not heard of disaster management; in fact, they did not even have first-aid kits or know ambulance numbers. The RPF became the butt of people's anger; the state and central governments were punching bags for furious and frustrated Mumbaikars, some muttered about bombing Pakistan for its sponsored terrorism. Why would terrorists want to cripple Mumbai? There were no immediate answers.

The web of terror hit Mumbai but many wondered at the subtle message in specifically hitting first-class coaches. After all, this section housed upper middle and middle-class professionals and traders, and is known to be Gujarati-dominated on some stretches. Home department sources did not want to lend credence to the theory of retribution for earlier anti-Muslim incidents. "The idea behind such an attack is to strike at the most vulnerable but most intrinsic and germane symbols of a city or nation," says M.N. Singh, former police commissioner who investigated the March 12, 1993, serial blasts. 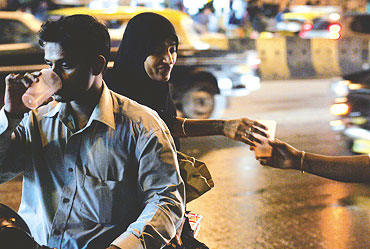 People as asset: The other Sensitive Index

Now, as then, from the burning debris and corpses arose Mumbai's famed resilience. At the seven blast sites, fear and strength coexisted, trauma did not stop helping hands, people's response time was quicker than the official response. Mumbaikars' ingenuity overrode bureaucratic procedures and such essentials as stretchers and ambulances. Chawls and slums next to the railway tracks provided bedsheets that were turned into makeshift stretchers, tempos and taxis turned into ambulances.

As night fell on July 11, 2006, nearly a hundred people were dead; scores injured. Hundreds of relatives scoured hospital after hospital for their loved ones, then headed for the morgues. Many wallowed in that vague despair, others found a corpse. And 24 hours later, the terror toll read 200 dead, 750 injured. Someone's company identification card with the red strap intact, another victim's cache of business cards, and tens of other items were the irrelevant survivors of a blind tragedy. 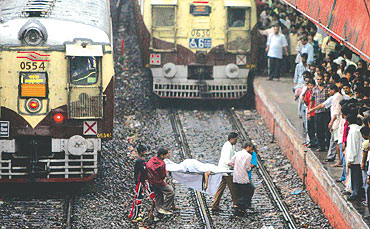 Chaos at the Mahim station on July 7

The Western Railway service, which operates a train almost every three-four minutes for 20 hours a day, was shut down for more than five hours and did not resume normal services for almost 12 hours. In a commuter city, this meant lakhs of officegoers and students were stuck at the southern end of the city or made their way home along the jam-packed Western Express Highway in bumper-to-bumper traffic, reaching home up north in the wee hours of the morning. Scores of Mumbaikars offered the helping hand: disaster management and emergency response systems lay by the wayside.

By Wednesday evening, though, much of the chaos had been streamlined with the Brihanmumbai Municipal Corporation providing updates of those in hospitals. Blogs and FM radio stations worked as helplines. The authorities had just about managed to get their act together. By the time PM Manmohan Singh appealed for calm on Wednesday night, Mumbaikars had collected their wits. The anger though was palpable. Only it was not directed at anyone or any community.

Western Railway personnel worked through the rainy night to clear the tracks, move the hit compartments to the yard for forensic examination, and restore the train services by early Wednesday morning. Schools and colleges saw near-regular attendance, commuters took suburban trains to work but with a new sense of apprehension, a stoic courage and a realisation that it could be any one of them the next time round. Where toe space is a fight on regular days in first-class compartments, Wednesday evening peak hour rush saw trains with enough space to sprawl. Those who boarded did not sit till they had searched overhead luggage racks and underneath seats for a "parcel" or "unidentified bag". 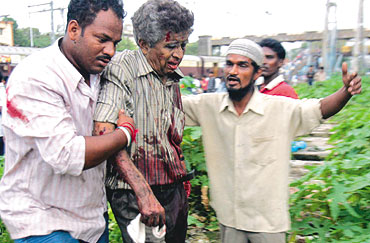 Mumbai resumed its regular rhythm, somewhat gingerly. But the mood was sombre. Mumbaikars are resilient because that's the only way they know to be, say veterans, but it was not your typical blase Mumbai. The spirit may not have been broken but it's surely weakened. It didn't help that Congress president Sonia Gandhi and Union home minister Shivraj Patil dropped by Tuesday night. It did not assuage anyone when state home minister R.R. Patil declared that "this was the darkest day of my tenure, a shame for me and the police".

But no one spoke of bringing the guilty to the gallows. Indeed, those in the know did not really know who the guilty were. Considering the March 1993 blasts judgement is still sometime away, there's a slim chance that the July 11 blasts mastermind will stand trial anytime soon. Mumbai merely hopes this is the last chapter of the city's terror story.

By Smruti Koppikar with Payal Kapadia