The tourism industry is booming on all fronts, except for a few air pockets 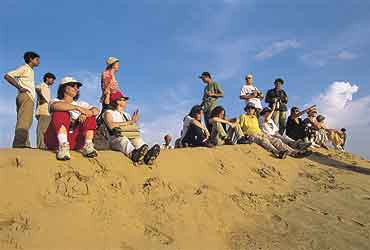 outlookindia.com
-0001-11-30T00:00:00+0553
First the bad news. If you haven't finalised your Christmas or New Year travel plans yet, we suggest you shelve them. For, most hotels and airlines already have "Housefull" signs up. Now for the good news. For the first time since 9/11, the Indian tourism fraternity is witnessing a real boom. According to Ankur Bhatia, MD of Amadeus, an international reservation system, foreign arrivals might just touch the magical three million-mark for the first time ever by this year-end. Not to forget the increasing number of home-brewed travellers.

While foreign tourist inflows in the January-October 2003 period are up by almost 16 per cent over last year, forex earnings are higher by 20 per cent. Hotels in most metros are reporting occupancy levels of over 80 per cent, a huge jump from the average of about 50 per cent in the last couple of years. States like Kerala, for example, are overbooked till March and even if you are willing to spend half your life's savings to buy a ticket on the Palace-on-Wheels, expect to be turned away.

"While every market in Southeast Asia, and even China, has seen a dip of 25-40 per cent, India is showing an upward trend," says Amitabh Kant, joint secretary, tourism ministry. sars has helped too, frightening people away from popular tourist destinations like Thailand, Singapore and Malaysia, and redirecting them to Indian shores. And this continues to be the case, since there is an irrational fear that the deadly virus might return to those parts of the world this winter.

Apart from these coincidences, the government's proactive measures have also started yielding results. The foremost, of course, has been the marketing campaign 'Incredible India' launched towards 2002-end. Then there is the open-skies policy being aggressively pursued right from the prime minister downwards. Finally, but most importantly, there's now a recognition that tourism needs to be given greater attention. Uttam Dave, CEO of PKF, a consultancy firm, feels the industry's response-time to crises have become shorter and that India is proving to be a "resilient product".

So, India is now on the 'must see' list of most global travellers and tourism brochures. In countries like Germany, France and the UK, the travel supplements even show a marked increase in pages devoted to India. The recently held World Travel Mart in London reflected this pro-India trend. "At the WTM, India was the flavour of the show, and her stall was a busy one with people trying to book contracts for next year," says Arjun Sharma, MD, Select Holiday Resorts, who himself has seen an upsurge of 20 per cent in occupancies in his two hotels in Goa and Manesar. In fact, given the heavy bookings for the October-March season, several Indian travel agents did not even bother to go to the WTM.

However, if India has to sustain this boom, it needs to urgently increase air capacity. Today, while there may be a will among foreign tourists to come to India, there's often no way; airlines are overbooked and the limited open-skies policy hitherto followed by the government hasn't helped. Until recently, India would allow foreign airlines some extra flights during the busy winter months. But as minister of state, civil aviation, Rajiv Pratap Rudy explains, "No airline can plan and expand traffic if we only open up skies for three months in a year and then extend it on a month-to-month basis."

In an unprecedented step, during his Bali trip last month, the prime minister himself announced that all designated airlines in the asean region would be allowed to operate daily services to the four metros and 18 other tourist destinations in India all round the year. That too without any quid-pro-quo landing rights for Indian Airlines and Air-India. This should see an increase in the number of flights being operated by Thai Air and Malaysian Airlines.In addition, private Indian carriers have also been allowed to start flights to Sri Lanka. "Today, there is a synergy between aviation and tourism. When you allow a carrier to fly out of a new city, they always promote that destination because their business depends on it," says Kant.

Rudy adds that the Sri Lanka initiative was also a way to help domestic airlines increase load factor. Domestic carriers normally operate at a load factor of about 55 per cent (the break-even figure is 65 per cent). Flying to new destinations would help reduce unutilised capacities for them. "We hope there will be a multiplier effect. Frankly, everybody wants tourism for their own country and we expect these carriers to market their nation and fly tourists into the country as well," explains Rudy. The fact is that while about 4.5 million tourists go out of India every year, only some 2.5 million come in. The minister would like to ensure that the latter figure goes up.

The only people who are peeved, especially by the open-sky policy, are officials at the state-owned carriers, Indian Airlines and Air-India. They argue that there is no direct link between such a policy and tourism. "If giving away seats is good for tourism, then how come tourist inflow increased just marginally in the last four years, even as air capacity doubled?" asks one of them. There are few buyers for this logic though, the minister himself making it clear that public sector interest is not necessarily the same as public interest. The popular refrain within the travel trade is that by resisting an open-sky policy all this while, the government was not helping India, just Air-India.

Clearly, the political will is now behind the tourism industry. The campaign on which the tourism ministry spent about $2 million last year is now getting a 50 per cent budget hike to $3 million. At the state level too, there's a lot of activity. For example, Uttaranchal has hired private consultants to prepare a master plan for trekking routes in the state to promote this as a key economic driver. And Tamil Nadu has launched an ad campaign to lure tourists who flock to neighbouring Kerala.

The party is on. Coupled with the smiles and high fives, there is even a sense of high optimism that next year might be even better. PKF's Dave would prefer to dub 2003 as the "recovery year". "It certainly is a rebound. But what we have achieved are only pre-9/11 levels. Real growth is perhaps one year away." Balbir Mayal, vice-president of the Travel Agents Association of India, is also looking forward to a much better year in 2004. Like it or not, the Indian tourism sector is poised to leapfrog into even happier times, the outlook is bright and shining. The only question nagging the industry is: what if something drastic—like a terrorist attack—happens in the near future? Touch wood.