Them Stars And Swipes 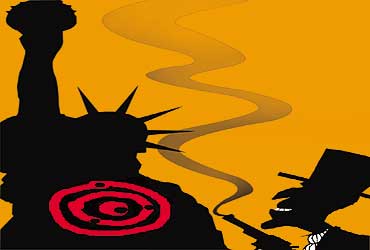 outlookindia.com
-0001-11-30T00:00:00+0553
The criminal procedure code of every democratic country contains one all-important provision. Information obtained through an unlawful search of any premises cannot, under any circumstances, be admitted as evidence in a court of law. No American government, whether national, state or local, would dream of flouting this principle at home. But in its dealings with other nations and foreign nationals, the Bush administration has shown a breathtaking disregard for this very same principle. What is worse, a deeply troubled and confused nation has let him get away with it.

For several months now, a US Senate permanent committee on investigations has been probing 'irregularities' in the UN administered oil-for-food programme under which Iraq was allowed to sell oil and buy food, medicines and other essential requirements to ease the rigour of UN sanctions. In a succession of reports in the past four weeks, it has condemned Kofi Annan for laxity in administration, hinted that he might have profited from the irregularities, and demanded that he be forced out of the secretary-general's post. This, despite a committee headed by Paul Volcker, ex-chairman of the US Federal Reserve, clearing him of all charges of malfeasance three months ago. It has also singled out and named a large group of people to whom Saddam Hussein allegedly gave quotas of oil to sell on Iraq's behalf in the knowledge that at 3-30 cents margin a barrel they would each earn hundreds of thousands of dollars. The purpose, says neo-conservative chairman Norman Coleman, was "to engender international support against UN sanctions". Coleman went so far as to dub this the "Saddam bribery scheme".

Needless to say, nearly all the persons the committee singled out were staunch opponents of the UN sanctions and the Iraq invasion. The committee's goal could not therefore have been more dubious: it was not only to show that Saddam had abused the international community's generosity, but that the anti-war and anti-sanctions movement was corrupt to the core. Annan was in the list of persons to be traduced and destroyed because he had dared, in the run-up to the 2004 general assembly, to describe the invasion as illegal.

What has followed is high drama. George Galloway, a British MP with whom the committee had dealt particularly harshly, insisted upon a hearing and presented himself before the committee on May 16. Refusing to be put on the defensive, he pointed out that the committee had been remarkably cavalier with the law and had found him guilty without even giving him the benefit of a hearing. He then sketched out before the entire international media how he had been the target of not one but three attempts to disgrace him; in the Daily Telegraph (London), the Christian Science Monitor (Boston) and the Daily Mail (London), with documents, all of which turned out to be forged. He reminded the panel that what was at issue was not Saddam's sale of oil, or the use of intermediaries, but the allegation that key international personalities had been bribed through these allocations. Had this actually happened, the committee would have been able to trace the funds. The fact that it couldn't proved that the purpose of the allegations was only to discredit the opponents of the US misadventure in Iraq.

Galloway's counter-attack, which left the committee and the Bush administration minus a set of clothes, was received with unconcealed glee by embattled US liberals and their numerous supporters in Europe. Few noticed, however, that Coleman's committee had succeeded in what it had set out to do. This was to shift the battle from an area where America was being routed, to one where it could put its opponents on the defensive.

What everyone overlooked was that the documents on which Coleman was relying, whether forged or genuine, came from the Iraqi ministry of oil. They fell into American hands because America invaded and conquered Iraq. That invasion was utterly and completely illegal, not merely because it had no sanction from the UN—the Bush and Blair administrations in any case refuse to accept that, and there is no higher court before whom they can be dragged—but because there were no weapons of mass destruction in Iraq. In retrospect, from 1994 at the latest, it was the UN sanctions that were illegal. For not only were no more weapons and production facilities found after that year, but it was in that very year that the US announced that no matter what UNSCOM concluded, it would not allow the sanctions to be lifted as long as Saddam was in power. From that year onwards, nothing was too low for the Clinton administration to stoop to, if it would serve the purpose of prolonging the sanctions. The US thus killed a million Iraqis, most of them children who, as Galloway pointed out, died even before they could learn that they were Iraqis, only to assuage an unreasonable and unfounded paranoia.

Since the Nurnberg trials, it has been more or less axiomatic that for a law to be valid it must conform to some basic principle of justice, or morality. An individual has a duty to resist, even disobey, orders that transgressed this fundamental principle. By this yardstick, Saddam had a moral obligation to fight the sanctions by any and every means that came to hand. Others had the moral obligation to help him do so. Whether George Galloway, Fawaz Zureikat or Charles Pasqua did or did not trade in oil or profit from it is irrelevant. Only in a world that has lost its moral and institutional moorings completely can this be portrayed as a crime. It is as much a crime as helping Jews to escape from Germany was, in the 1930s.