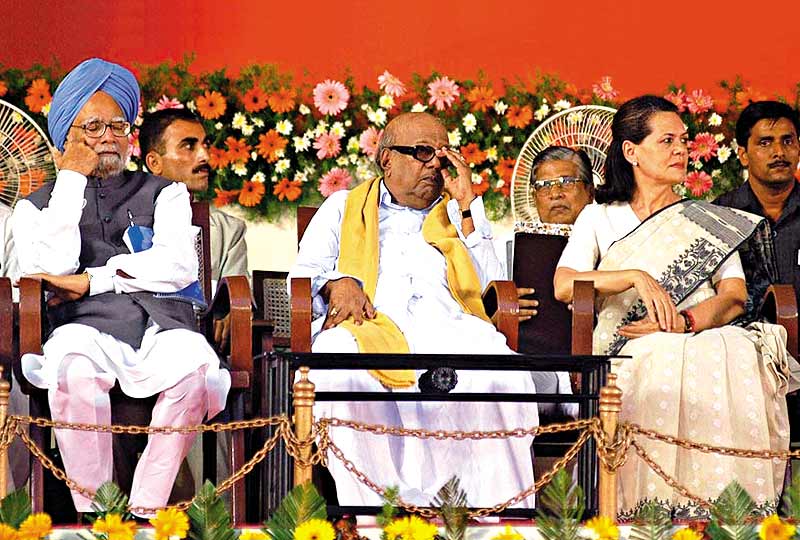 The Sword Of The Dravidians

Atal Behari Vajpayee would always tell people that the several days’ wait for a letter of support from AIADMK leader J. Jayalalitha was a nightmarish beginning to his six years as PM. Those who covered that era have vivid memories of the lady driving into 6, Safdarjung Road (occupied by Vajpayee before he moved to Race Course Road). As the vehicle stopped under the portico, a man would charge out with a foot-stool. It would be placed for the lady in the cape to step on before she walked on flat earth and accepted the ground beneath her feet.

The NDA managers were both fascinated and tormented by her. A year later, she dumped them after her frequent dem­ands that the Vajpayee regime dismiss the Karunanidhi gov­­ernment in Tamil Nadu were parried off. The NDA government then collapsed in Parliament one vote short and fresh elections took place, after which the DMK became part of the NDA—easier to manage on the surface but with a  foc­­u­­ssed approach to extracting the maximum possible from the alliance. Muthuvel Karunanidhi was  pampered, consu­lted, plied with several sha­wls and angavastrams. He stayed the course much longer, but by December 2003, he too was done with the NDA.

He walked out of the Vajpayee regime on the pretext of ideological differences and opposition to POTA. The NDA subsequently advanced elections and called for them in 2004 on the plank of India Shining, in the belief they would win again. But as DMK MP T.K.S. Elangovan shared with journalists this week, the “Kalaignar” was a lot more canny. “He believed then that the BJP would be defeated as he does now that the Congress is a liability as an ally.”

Just about a decade after he told the BJP to take a hike, it is the same Karunanidhi, now 89, who has delivered the big­g­est jolt to an increasingly vulnerable Congress. This time he’s also seen a political opportunity to try and regain some credibility on the Sri Lankan issue and get rid of an ally who currently appears to be baggage rather than an asset. Dit­ched and angry, it can only be a matter of speculation on whether the Congress really did order the subsequent CBI raid on the  residence of Karunanidhi’s son M.K. Stalin, and question grandson Udayanidhi about the purchase of an imported Rs 1.4 crore Hummer in 2007 (see box, page 36).

Still, there is little doubt that after the next general elect­ions (early or on schedule), the national parties will again queue up outside the doors of whosover carries Tamil Nadu. And if we go by recent history, then let’s also be aware of the fact that although the Hindi heartland players are important for their numbers, it’s the Tamil politicians who have been the regime topplers. Politicians and political parties from the state have embraced the Centre only to rudely ditch it time and again. They have proved the hardest bargainers in the game-of-reg­ional-extraction-from-the-Centre, the most callous in their exits. Yet, they will always be courted by national parties.

The “Tamil Gaze” on New Delhi is quite particular and dis­­t­inct. All those secular, non-secular arguments that are used to keep other parties in line do not apply to the Tamil forces because politics is defined very differently in the state. Their ideologies were once rooted in the Dravida consciousness, anti-Hindi and anti-Brahmin movements, but now it’s the routine development and livelihood issues along with a certain arithmetic of alliances with caste/ide­n­tity-based smaller parties that determines politics within the state boundaries. 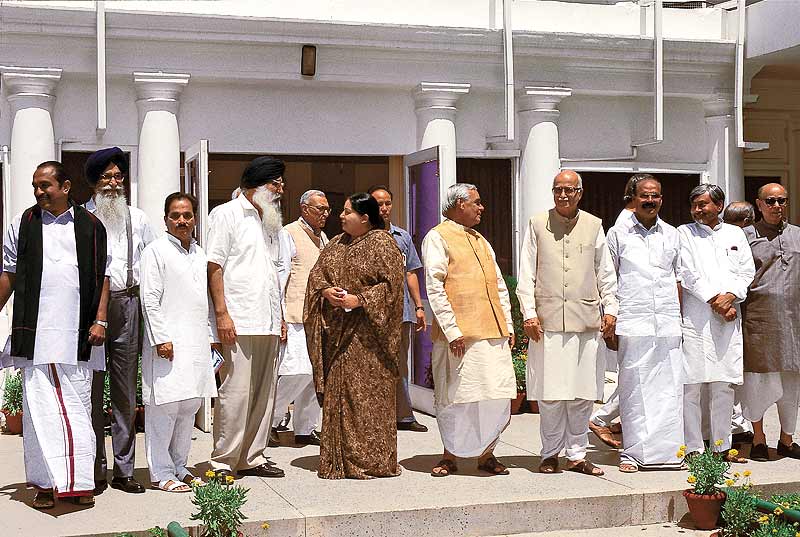 Dr V. Suresh of PUCL says the parties in the state have no national ambition because the definition of their politics is regional. “Unlike a Mayawati, whose caste-based politics strikes a chord in other states barring Tamil Nadu, the politics of Tamil Nadu is circumscribed by geography and language. Even the full form of DMK or AIADMK are distinct Tamil names. That’s why perhaps the Aam Aadmi Party with a distinctive Hindi name will have few takers here and even the CPI, CPI(M) and Congress cannot be big players,” he says.

“We maybe two nations, but the Tamils on both sides are the same. How can we keep numb in the face of such a genocide?”

Of course, regional parties, by their very nature, are more focussed on their states. But they do try for national units and profiles. For instance, Mamata Banerjee’s tmc has small units in a few states, Nitish Kumar’s JD(U) even gives out its symbol in a state like Gujarat, the NCP is a player in small and big ways across the country. But the Tamil players have the greatest mental distance from Delhi. Dr M. Anandakrishna, former director of the Madras Institute of Development Studies, says, “They often don’t seem to belong to the rest of the country because their politics is disconnected to a large extent.”

Ravi Kumar, MLA from the Dalit Panthers Indian, headed by Thol. Thirumavalan, blames it on the sense of alienation that Tamils have been foisted with. “Whether it is the UPA or the NDA, there is a belief that New Delhi has largely ignored the aspirations of the Tamil people. Whether it is the Cauvery dispute, where the courts had to step in, or the cases of TN fishermen being captured by the Sri Lankan navy, or the more recent tendency to ignore the huge student protests over Sri Lanka, our sense of separation is never ackn­o­w­ledged. The mood in Tamil Nadu is one of sullen anger now. And coming to the wrangle for portfolios, it’s a coalition age and it’s not just the Tamil parties who do it. All parties do.”

From the war-cry of ‘Hindi Ozhiga’ (Banish Hindi) on the Marina beach in the late ’60s when it was sought to be imp­­osed by the Centre, to the Cauvery/Mullaperiyar issues, and the more recent student protests over Sri Lanka’s war crimes, the state continues to be obsessed with its own inner workings and distinct contemporary issues.

Of this, the most dramatic and complex is the Sri Lankan one, a culmination of which was the most brutal political assassination in contemporary Indian history. It’s also worth recalling that the same Congress that has now been so stunned by Karunanidhi’s departure, once pulled out support to the I.K. Gujral government in November 1997 after its demand for sacking the DMK ministers was rejected. (It came after the Jain Commission report on the assassination of ex-PM Rajiv Gandhi held that the DMK had tacitly supported the LTTE, which was responsible for it).

At times, it seems the blood trail from the terrible events in Sri Lanka are conveniently forgotten. In the routine ban­­alities of Tamil politics, it has at times certainly appeared to be grand farce. But blood trails have a way of reappearing and being remembered in people’s collective memories. In the present case, the war atrocities by the Sri Lankan army have been bro­ught to life by still and moving images, creating a spontaneous students pro­test in the state. Indeed, there is even talk that the ferment on the street is what sparked off this pullout. The Students Federation for Free Tamil Eelam has been among those spe­e­rheading the effort to make it a state-wide movement. As member and Chennai Loyola College student Sembiyan says, “We maybe two nations, but the Tamils on both sides are the same. How can we keep numb in the face of such a genocide?” The college, along with others, has been shut to prevent org­anised protests. “This is not going to suppress the uprising. The state governments do nothing. It was the DMK in the state when  the 5th Eelam war took place and Prabhakaran was killed. They did nothing then but shed some crocodile tears. They are repeating the same now just to get some political mileage,” says Annie Abhinaya, a law student and active par­t­icipant in the protests in Madurai. Ask eminent sociologist M.S.S. Pandian about his state’s politicians, and he retorts that the real story is happening on the streets, where the students have been out for weeks. “And yet the media in Delhi is focusing on the political parties and the future of the UPA,” he says.

True, it is one story from Tamil Nadu that is yet to get much play in Delhi. Perhaps it may be considered of greater significance if it is understood in the context that Karunanidhi acted the way he did because he suddenly saw a huge energy in the streets and possibly thought this was a way to link himself with a sentiment and rage which was out there. For all the corruption scandals, contradictions and dynastic rule now linked to his name, it cannot be said that the octogenarian does not have the pulse of the people. Karunanidhi did, after all, cut his teeth on what was once a great movement.

By Saba Naqvi and Anuradha Raman with Panini Anand

Only A Homeland For A Toothless Paper Tiger