The Zodiac In Your DNA 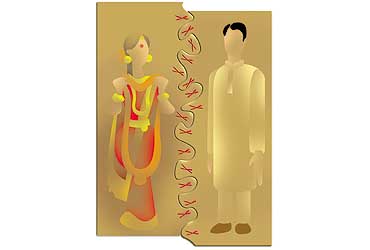 Madhwani, Varma and Gopalswamy are members of a growing community of Indian men and women turning up at speciality clinics these days to check their genetic 'compatibility' and find out whether they'll have healthy children. It might not be goodbye as yet to the reliable family astrologer and the stentorian patriarch's nod to a suitable match, but a lot more marriages are being made in the geneticists' clinic today than ever before.

Experts attribute this to the growing awareness about the role of genes in triggering a number of diseases. It's a grim 13,000—and growing—checklist. Some of them include cancer, cardiac ailments, muscular dystrophy, mental retardation, diabetes, haemophilia, thalassemia and birth defects like Down's Syndrome, cleft lip and cleft palate, autism, impaired vision, hearing and speech. (An alteration or combination in some of them can produce a genetic ailment). "In India there is now a demand for pre-natal tests because an abnormal baby is an economic burden on the family. But there are some people who want the tests done because they want to be prepared," says I.C. Varma, head of the genetic medicine department at Delhi's Sir Ganga Ram Hospital.

Goaded by aware parents, careful family doctors, or simply taking a well-informed decision themselves, many urban couples, are opting for genetic counselling before tying the knot or starting a family. In Bangalore, three hospitals, including the National Institute for Mental Health and Neurosciences (NIMHANS), are reporting more couples for genetic tests and counselling than ever in the past. At NIMHANS' weekly mental retardation clinic, doctors report an increase in the number of cases—1,200 cases today, up from 750 cases 15 years ago. They reckon about 35 to 40 per cent of these cases are because of genetic disorders. "Parents of mentally-retarded children undergo these tests as they want to have healthy children in future," says Satish Girimaji of NIMHANS' psychiatry department.

There are a few super-speciality clinics in New Delhi, Mumbai, Lucknow and Bangalore that screen genes and counsel couples on the foetus' health. Couples trace their family tree with a history of illnesses. (These form the foundation for proper diagnosis and to evaluate the risk of recurrence of a disorder.) This is followed by dna tests to spot mutated genes. The risk is conveyed to the parents during early stages of pregnancy. "We inform parents about the probability of a genetic disorder and give the required counselling," says Suraksha Agarwal, head, department of genetics faculty at Lucknow's Sanjay Gandhi Post-Graduate Institute and Medical Center. The decision to carry on with the pregnancy or abort is left to the parents. "We cannot play God here," says Sridevi Hegde, head, medical genetics department, Manipal Hospital.

But the ethics issue does vex doctors, considering that genetic tests are often not accurate.Should doctors recommend medical termination of pregnancy when tests indicate a higher probability of a genetic disorder? Then, in most conservative Indian families, the consequences of a 'negative' genetic test could be disastrous for the daughter or daughter-in-law. "If someone knows that a gene, even if it is a recessive one, in his or her body is abnormal, they think it is the end of the world and want it kept a secret, little realising that each one of us has some genetic abnormality. It is quite normal as long as it does not manifest in a problem," says Varma.

But all is not well with genetic testing in India. For one, the costly tests are often inaccurate and set off panic among couples. Clinical facilities for genetic investigations are poor and there's a shortage of trained clinical geneticists. The less said about the state of the resources-strapped genetic research the better. "We haven't isolated a single gene that causes any disease," says Dr Arun Kumar, assistant professor of human genetics at Bangalore's Indian Institute of Science. If Indian couples are "breaking a taboo by invoking science" in marriages today, as sociologist G.K. Karanth avers, genetic science and counselling still has a long way to go here. So watch before you leap.

B.R. Srikanth with Dhiraj Singh and Sutapa Mukherjee in Lucknow

(The names and identities of some people have been changed)