'It was the best of Yuvraj and Kaif. Not in terms of statistics and figures but because of their steely temperament. They just went on till it suddenly dawned, God we may actually win this match.' 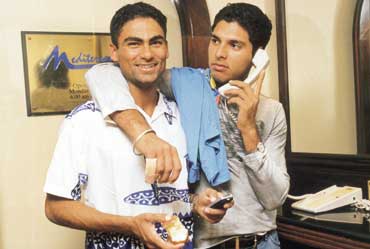 I have known Yuvraj Singh and Mohammed Kaif long enough not to be surprised at their astounding success. They are two very different people. Yuvraj is an abundance of talent, great energy and uncontrollable enthusiasm. Kaif is a calm, silent chap with talent that is perhaps average. But what is superhuman about him is his ability to work hard at his flaws. He can push himself to the very limits of endurance.

These two complement each other very well and if these chaps are at the two ends of the pitch, the fielding side has a lot of work on hand.

I first met Yuvraj when we used to play junior cricket together. He was about 15 when I first saw him bat and I was fascinated by his sheer power. He had a God-given gift of timing. And on top of all this he could run like a mad man. He is also a hard-working guy.

He wanted only one thing—the only one thing he could think of. Playing for India. And I think, deep down he had a very strong feeling that he will play for the country. It was for that reason that he would try his hand at bowling though there was nothing...