A dinosaur egg stirs central Gujarat. But the GSI says it knew all along. 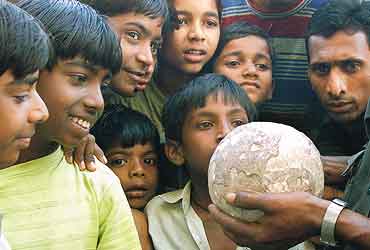 outlookindia.com
-0001-11-30T00:00:00+0553
When Balasinore town celebrated the chance find of a 5-kg fossilised dinosaur egg during a BSNL digging work last week, it was sweet vindication for its denizens. They have been insisting for years that Balasinore had dinosaur fossils, but scientists would just ask them the way to Rahioli, the world-renowned dinosaur hatchery and graveyard some

20 km from Balasinore in central Gujarat's Kheda district. "Everybody thinks only Rahioli had the fossilised eggs embedded in its rocky terrain. I have been saying, even writing, that there are eggs in this town too. Now we have found one and I am sure there is much more underneath," says an excited Shirish Trivedi, local tobacco farmer-cum-journalist.

Trivedi has become the port of call for TV crews and pen-pad journalists and he is elated that they don't go beyond Balasinore to Rahioli, barring a few late risers. A small crowd of residents follows him around as he holds forth on how he has lived amidst dinosaur eggs for the last 20 years in Balasinore and how he knew at first sight that the BSNL find was a fossilised egg. Visiting journalists quickly reported Trivedi's excitement, TV crews fell over one another to shove in the microphones for that byte. Some quickly phoned the Archaeological Survey of India (ASI) to be told it is the Geological Survey of India's (GSI) job; some rushed to the district collector, 70 km away, who was busy dictating a letter to the ASI about the find; some revved up internet search engines.

But, less than 125 km away, in Gandhinagar, the GSI's reaction is a been-there-done-that shrug. They have reason not to be excited over this one stone, which everyone agrees is a dinosaur egg. They know, and know since 1981, that Rahioli village isn't the only place with dinosaur fossils though it has been found to be very significant because of the 1,000 eggs and bone fossils it has delivered. The most recent find in Rahioli a few years ago was by palaeontologists Paul Sereno and Jeff Wilson who, with the support of the GSI, reconstructed a dinosaur skull and even named it Rajasaurus narmadensis, for the region falls in the Narmada basin.

The excitement in Balasinore is not unreasonable, but the GSI is unmoved because it has uncovered enough fossils to suggest that dinosaurs ambled along the entire Narmada basin, from Himmatnagar in north Gujarat to Jabalpur and beyond in Madhya Pradesh, even up to Andhra. In Gujarat itself, there is evidence that the gargantuan reptiles existed in Jhalod in Dahod district and in Kutch, besides Rahioli and Balasinore. A GSI spokesperson says the study of the various types of egg fossils reveals that all types of dinosaurs, be it the herbivorous sauropods (four-legged ones), carnivorous theropods (who had four legs, but walked on two) or the mostly herbivorous ornithischians (the avian types), lived in this region.

The largest dinosaurs were over 100 feet long and up to 50 feet tall, while the smallest were about the size of a chicken. The creatures, say GSI scientists, lived for over 165 million years and went extinct 65 million years ago, at the end of the Cretaceous period, a time of high volcanic and tectonic activity. "In Kutch, we have even found pugmarks embedded in the land, and plant and elephant fossils suggest that the now arid desert of Kutch was once a dense forest complete with rivers. Kutch's desertification due to tectonic activity must have started some 10,000 years ago," says the GSI spokesperson.

Since they were gigantic land-dwelling animals, the low-lying planes of the Narmada basin became their ideal breeding ground. Explains the GSI spokesperson: "It so happened that high tectonic activity breached the Narmada-Son-Tapti lineament, which is a deep coastal faultline and cuts across India east to west, and also caused influx of water from the Tethys ocean to the basin.(The Tethys, which separated Laurasia from the southern Gondwanaland of which the Narmada basin was a part, was in current north India where the Himalayas are.) The new shores created in the basin, ideal for forest growth and vegetation, became home to the dinosaurs. Besides, the erosion of the ancient Aravalli mountain ranges because of tectonic movements also created ideal plains for them to exist."

There are several theories why the gigantic reptile went extinct, though the most accepted one, for which the GSI has also found evidence in Kutch, is that an asteroid impact caused major climatic changes to which the dinosaurs could not adapt. "For instance, we found three layers of iridium within 1.25 metres depth in the earth near Anjar in Kutch. The last one at the bottom had 1,440 parts per billion (ppb), while the penultimate layer had 720 ppb. These would have been lethal doses for dinosaurs," he explains. The iridium releases, according to him, could have been due to an asteroid impact.

Other theories have linked their extinction to major volcanic activity that triggered climatic changes. The GSI also says that such disruption of habitat could have led to constant movement by dinosaurs, causing major hormonal imbalances, which is evident from the fact that the egg fossils show multiple layers. "This, in turn, means the animal could lay eggs only after several attempts and the embryos got suffocated. We call it palaeo-pathological condition of the eggs," says the GSI spokesperson.

For now, the Gujarat government has a plan to set up an entire dinosaur theme park in the rocky, fossil-laden terrain in Rahioli, which has now been fenced in the wake of increasing incidents of thefts of the eggs. It is another matter that the plan is yet to take off with even the basic road to Rahioli from Balasinore remaining an obstacle course for drivers. But neither Rahioli nor Balasinore nor the Narmada basin is bothered, as long as the land continues to deliver dinosaur eggs and journalists and researchers keep coming.