It must have been a tough time for the rest of the players to see their key bowler leave under such circumstances, and just hours before their opening game. But it must be said that they handled the situation extremely well. 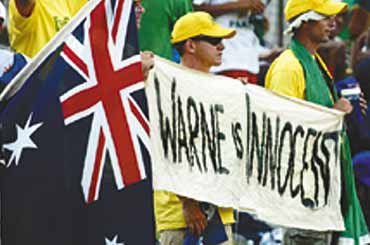 outlookindia.com
-0001-11-30T00:00:00+0553
Not surprisingly, the news of Shane Warne testing positive for a banned substance has been making front page news all over Australia. Everybody is in a bit of a shock, including Shane himself, and the turn of events has been most unexpected for those who were looking forward to seeing him perform in what would have been his last World Cup.

It would be unfair to make any comments on the affair until the whole procedure is completed, and I would not want to make any guesses about what impact this could have on Shane's career. In the past few years, the ASDA in Australia has played a leading role in testing sportsmen for drugs. Random tests are routine for cricketers in Australia. Players are tested during training as well as during games, not only at the international level but also at the first-class level. For instance, I have already been tested twice or thrice during this domestic season.

Right now Shane is awaiting the results of the 'B' sample test, and I'm sure he's hoping to prove his innocence and return to the World Cup. Everything seems pretty much in a state of flux right now. I know Shane was really looking forward to this World Cup, and having to leave the way he did must be devastating for him.

It must have been a tough time for the rest of the players to see their key bowler leave under such circumstances, and just hours before their opening game. But it must be said that they handled the situation extremely well. Full marks to Ponting, the coach and the support staff for keeping the players focused on the game rather than the off-field drama. Such a crisis can work in one of two ways: it can either disrupt the team's concentration, or it can bring a unit together and get it doubly fired up.

I thought both Ponting and Symonds were superb in the manner in which they took on the Pakistan bowlers. Ponting has matured a lot as a player after taking on the mantle of captain. It must have been a challenge for him to focus on his own batting while ensuring that the other players were not affected by all that was happening around—and he responded magnificently. This could also well be the turning point in Symonds' career. Those who have seen him play in domestic cricket would not have been surprised by his astonishing repertoire of strokes. Symonds always had the potential to be an exciting batsman in international cricket, and hopefully that potential will get realised now.

Almost all the surfaces so far have been batsman-friendly, with the pitch at Bloemfontein proving to be an absolute batting paradise. I was not particularly surprised by the Windies win over South Africa. They are a competent one-day unit, and I would go as far as predicting that they will make the semi-finals. The Sri Lankans also revelled at Bloemfontein, and right now it would be very difficult to write off anybody.

I've played a fair bit of one-day cricket in South Africa, and the wickets have always favoured batting. While there is very little seam movement, there usually is a little more pace and bounce in the tracks. The pitches are very dry at this time of the year and I expect more centuries as the tournament progresses. Batting first will be a huge advantage. Teams like South Africa, New Zealand and Pakistan failed to chase totals in their opening matches.

The only batting line-up that looked a little underdone even while batting first was India. I was disappointed to see them struggle to reach 200 against Holland. Going by the evidence of the first match, it seems like the batsman are still not in the best of form. But I would still like to give the benefit of doubt to the Indians because teams can drop their standards a little when they play a less fancied side. The big guns in the Indian side have to bat a lot better.I know the Australians rate the Indians as a dangerous team, so Saturday's encounter with Australia is the real opener as far as the Indians should be concerned. (Gameplan)