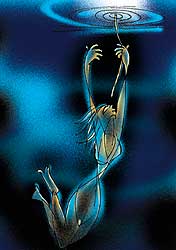 Here nothing is safe
there are holes
wells to drop down

over the edge of
knowing into being

India is no land
for the myopic

For far too long, India has been the land of mysticism where the dispirited, alienated Canadian came calling for the life-altering experience. What seems to have changed now is that among these nirvana-seekers are a clutch of writers who are turning their lurid purple passage experiences into books on their return.

Most of these books are benign, non-fiction works focusing on the spiritual quest of their authors. Yet, of late, some of them have begun to incorporate their travel experiences and the sounds and sights of India into a range that varies from the sublime to the ridiculous. Unlike earlier books on India, those written today are mostly penned by established writers and poets—and are not mere spiritual guides for the religiously-inclined.

In the '70s, for instance, Dutch-Canadian Lynn Stevens was so disillusioned with her stay at the Rajneesh ashram that she wrote Een Schijn Van Heiligheid, which approximately translates to 'Fools' Gold'. Similarly, Timothy Ward's What the Buddha Never Taught was equally cynical about Buddhist traditions. Satya Frankling's The Promise of Paradise, a book published in 1992, described her experiences as a Rajneesh devotee.

But such tales of spiritual disillusionment or discovery have given way to books that are more in the genre of 'personalised' stories, combining the quest for life-altering experiences with incisive accounts of staying and travelling in India. Most authors returned feeling extremely privileged after witnessing the heart-rending poverty of India and the abysmal levels humanity must plumb to survive.

Author Sylvia Fraser, who has published six novels since 1972, says her latest bestseller, The Rope in the Water, released this April, is about the personal journey India afforded her. Feeling burnt out as a writer, and believing India could offer her the "riches" she felt it possessed on a trip 23 years before, Fraser decided to wing her way back to the land which, as she says, boasts of an unbroken 5,000 years of spiritual tradition.

Her experiences included a 10-day stay at a Buddhist retreat and then at Amritsar's Golden Temple, besides visits to various Hindu temples. She logged a total of 12,000 km in three months, travelling on buses and trains and staying at modest lodges. At Kovalam in Kerala, she had a near-death experience—she was on the verge of drowning when, out of nowhere, a rope floated across. She clung to it and survived to write the book, its title referring to her scary experience.

"It is a very positive book," says Fraser who has incorporated bits of adventure travel into it. "In comparison to Indo-Canadian writers who write about the difficulties of being in India, my book is more optimistic," she gushes.

Indeed, works of Indo-Canadians including Rohington Mistry, M.G. Vassanji and Anita Rau Badami are vastly different from the upbeat White travellers in India, tending as the former do to mesh innumerable outpourings of tension, inequity and contradiction into their narratives.No doubt Mistry and others have enriched the literary tradition, but writers like Fraser are bound to evoke more interest about India among armchair travellers, spiritual or otherwise.

Much hype already surrounds the collaboration between two leading poets, Penn Kemp and Angela Hryniuk, in writing Sarasvati Scapes, due for release early next year. With 20 books behind her and considered among Canada's most active 'sound' poets, Kemp is well versed with India, having been a writer-in-residence at Mumbai's sndt University in 1995 and then returning in 2000 to perform at 15 colleges and universities in Mumbai, Jaipur and in Gujarat. "I'm part of the great western need to define India, the mystery, the unknown... but in the end, India is so vast that there is little commonality among these tales," says Kemp.

The change in the imagining of India can also be ascribed to the shift in literary politics of Canada since the early Nineties. Then, Indo-Canadians had joined the ranks of disenchanted writers who felt their White counterparts were appropriating territory not their own. Following some extremely tense meetings and allegations of counter-racism, the 1,400-strong Writer's Union became less of a White preserve—it includes about 25 Indo-Canadians today as against five or six a decade ago—and, simultaneously, assured writers freedom to write on all subjects without being irresponsible.

No wonder books of non-Indian writers today are less exotic than before, and although an experienced eye can still discern anomalies, contemporary writing concentrates on delivering succinct descriptions of sights and smells that are real rather than mysterious. And most of them are less judgemental and more open-minded than their predecessors.

Says poet-writer Angela Hryniuk, "You smell Delhi before you see it... it's the pungent thick potpourri of burning coal, diesel and incense that greets you off the plane". She writes without holding back on the high levels of physical discomfort she experiences in India, starkly contrasting these with the sublime spirituality she encounters in the Buddhist precincts of Dharamsala and Bodhgaya.

Post-trip, it takes her three-to-four months to recover during which time she wants to never go again. But then, as Hryniuk says, "The divine is always found in that tension between darkness and light where non-duality gets blown apart." In Sarasvati Scapes she writes: "If you think you have an open mind when you arrive in India, you find out how much more that open mind can become. It feels like the mind stretches and stretches and then seeing a dog eat someone's vomit or shit, it stretches yet again".

Another India book to have made a mark was Michael Dejong's I Thirst: Seven Trips to India, which, published in 1998, outlined his quest for what the western gods couldn't deliver. His initial plan was to live in an ashram but, like so many other foreigners, Dejong ultimately found himself at Mother Teresa's Sisters of Mercy mission. Tending the bedraggled, sore-infected sick, and finding strength and conviction in Mother Teresa and her associates' unconditional love for the poor and helpless, Dejong managed to refocus his jaded thinking.

Such earnestness about the Indian experience often has Indo-Canadian writers scowling. Says Anita Rau Badami, on her third book after 11 years in Canada: "I don't care who writes on India as long as it's a book written honestly and without stereotypes."

Adds poet-playwright Ajmer Rode, who has written several books in English and Punjabi, "Books getting written about India is certainly good since it helps to project the country internationally. But this is good only as long as Indian writers do not get crowded out." For the moment, though, writers seem to have helped expand the mental horizon of Canadians.